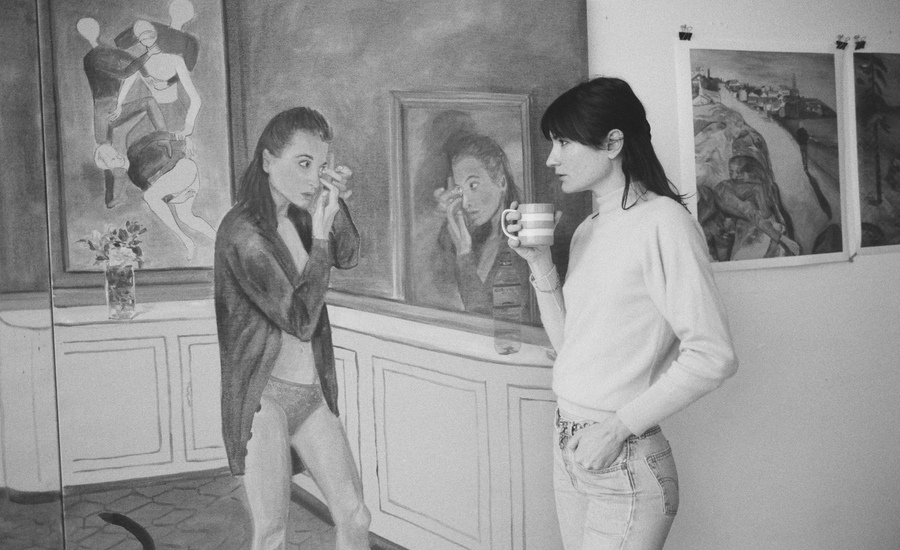 Jill Mulleady orchestrates uncanny mise-en-scènes that evoke unsettling and otherworldly narratives and delve into ideas of the collective unconscious writes Charlotte Eytan in Phaidon’s new book Prime: Art’s Next Generation. "Examining personal and cultural politics, estrangement, and psychological considerations of the human experience, her practice coalesces a range of approaches from figurative fantasies to everyday realism. She unearths feelings of vulnerability, angst, perversion, and latent desire through interwoven elements sampled from literature and art history. In her paintings, the surreal permeates domestic scenes fueled by hallucinations and imbued with a cynical melancholy of an increasingly hyperconnected—or disconnected —world. 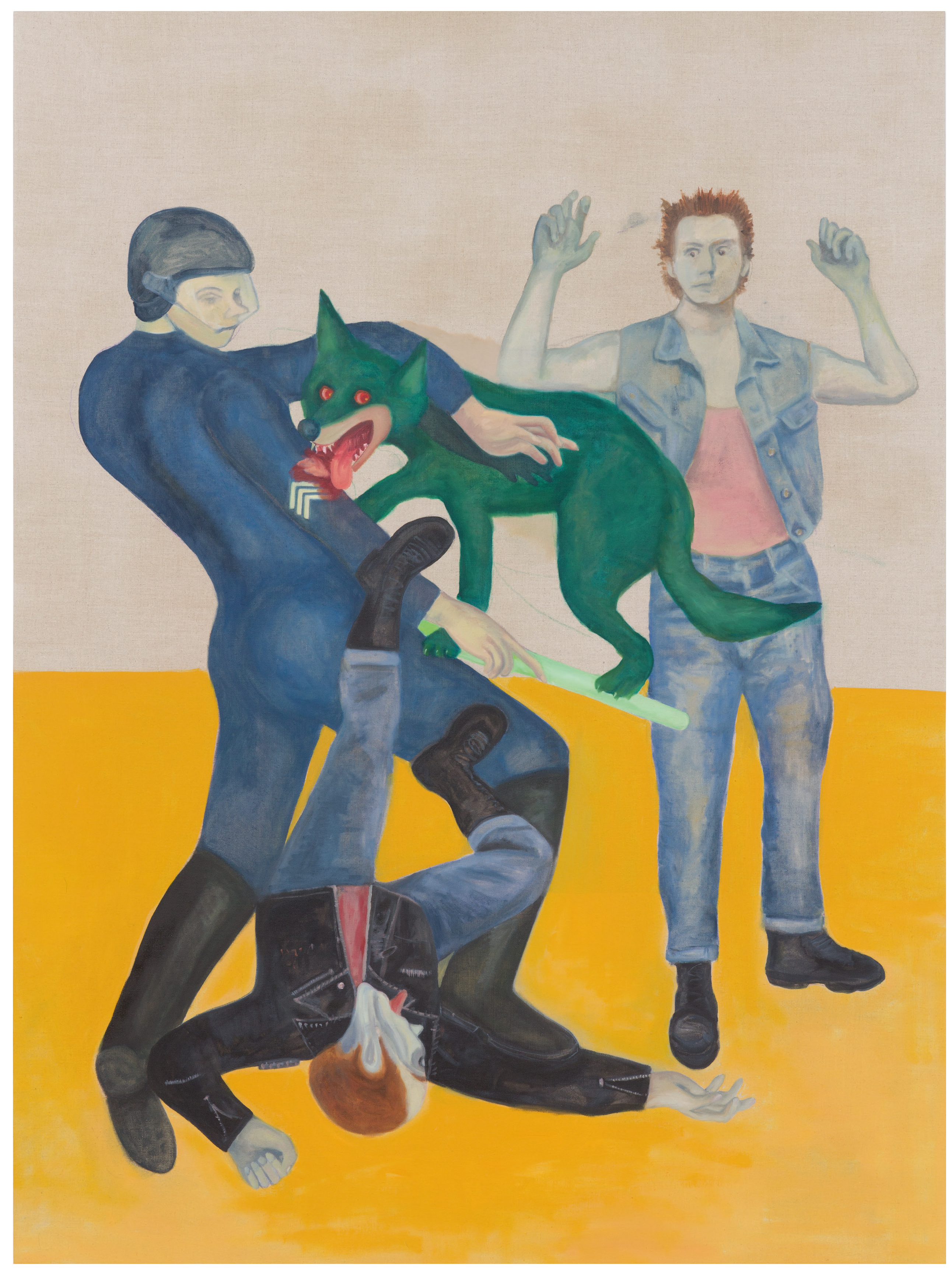 At times, the artist juxtaposes incongruent imagery in multipanel works that bleed into one another like the unwinding of a film with no clear beginning, middle, or end; as seen in the triptych This Connection is not Private (2018). Wandering teens, juvenile delinquents, hipster junkies, and spirits all cohabit this world, their warped activity unfolding in seemingly natural surroundings that carry an oddly muted tone, as though expectant of a foreboding future. Other works, such as Prince S, (2017), build tension by suffusing a controlled composition with hints of chaos and unease.

A genderflux character with bloodshot eyes is shown wearing nothing but sneakers and jeans, smoking a joint in a casual yet unnatural-looking posture. Rendered in otherworldly blue, the figure appears unfazed by the three entangled, faceless nudes in the background engaged in what appears to be a heated ménage à trois. Amid the painting’s psychological staging of urges and repressions, the figure gazes at their doppelgänger reflected in the mirror, while the joint’s fumes form a Starry Night constellation of smoke. 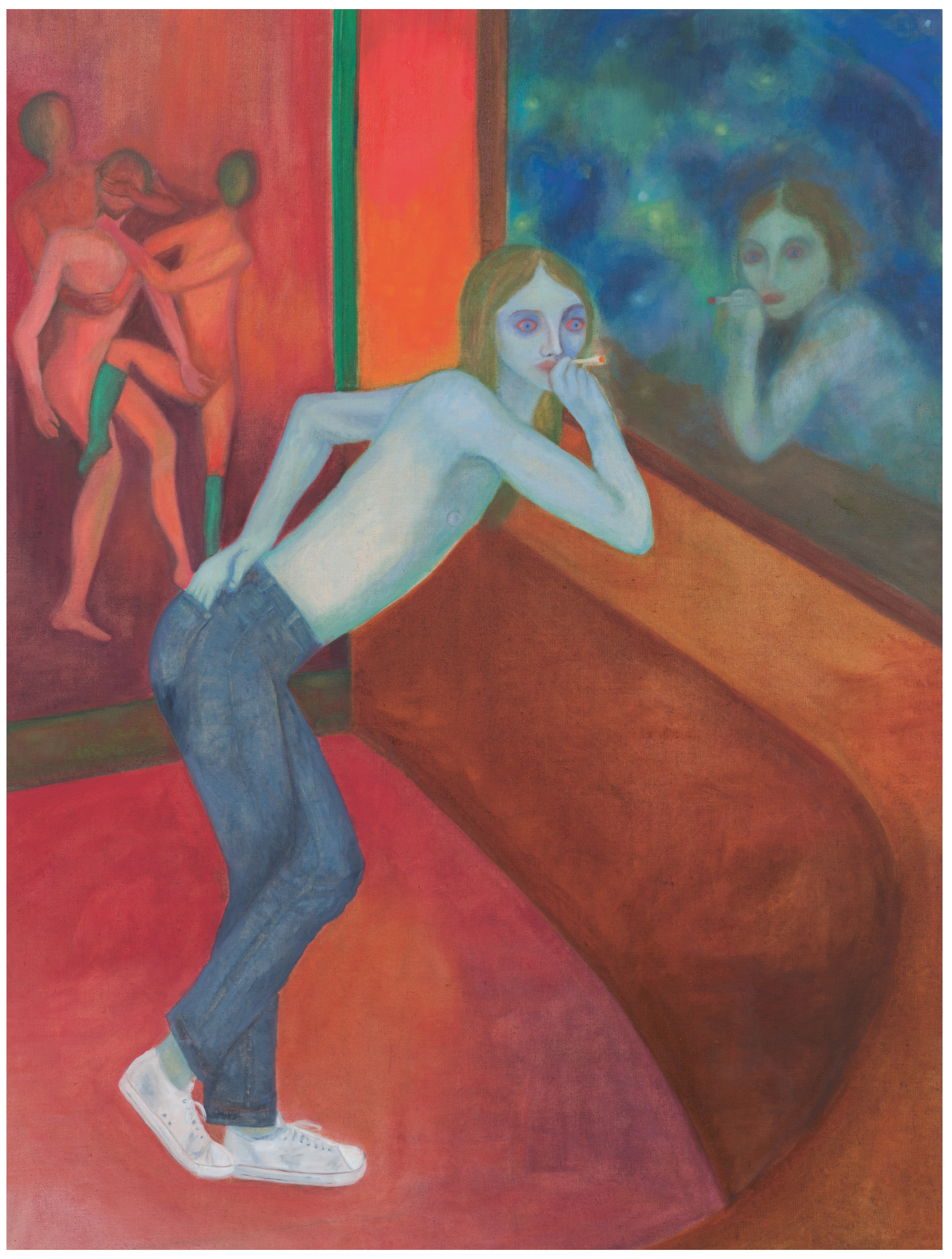 Mulleady explores the medium of painting as a site where liminal spaces and eerie experiences fabricate multiple streams of consciousness; there are no borders between realities, times, or spaces, and scenes continually morph with a kaleidoscopic use of color. Interior (2019), a large-scale diptych, portrays five individuals—an amalgamation of Mulleady’s friends and imaginary characters—who inhabit a space together yet appear curiously disconnected, absorbed in their own doings. An elderly man smokes in the background, while four partially dressed women perform habitual acts: applying makeup and contact lenses, stroking a cat’s tail, and staring intently at a smartphone. While the adjacent panels suggest the continuation of a scene, the cropped body of a cat interrupts this illusion. 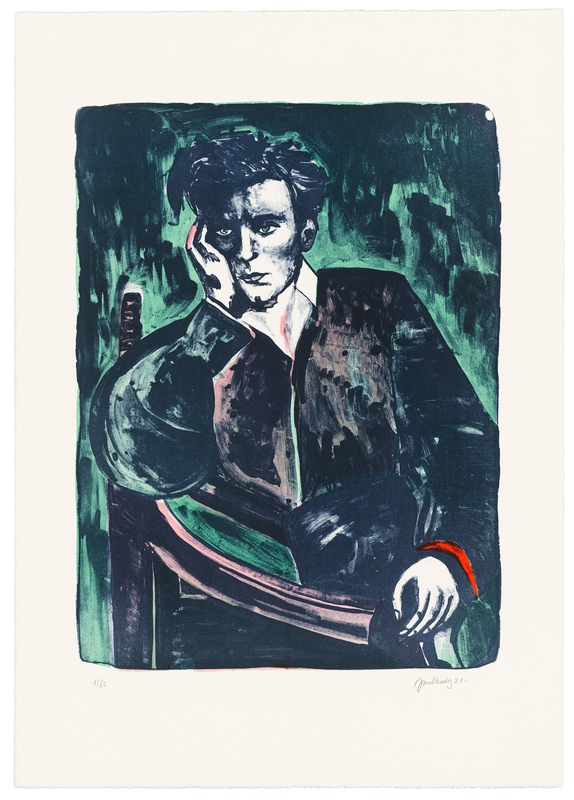 With their mysterious fleeting subjectivities and shifting temporalities, Mulleady’s paintings engage with the mutability of memory and the ways in which trivial everyday actions can be freighted with allusion and meaning. Hers is a waiting space, heightened by a sense of existential isolation—fantasy and imagination usher in a new dimension in which one is faced with confronting the core of their own beliefs and identity." - Charlotte Eytan.

Mulleady is one of over a hundred contemporary artists to be featured in Prime: Art's Next Generation, Phaidon's new survey of contemporary artists. We asked her a few questions about her life and art. When you've read the story take a look at Mulleady's artist page on Artspace. 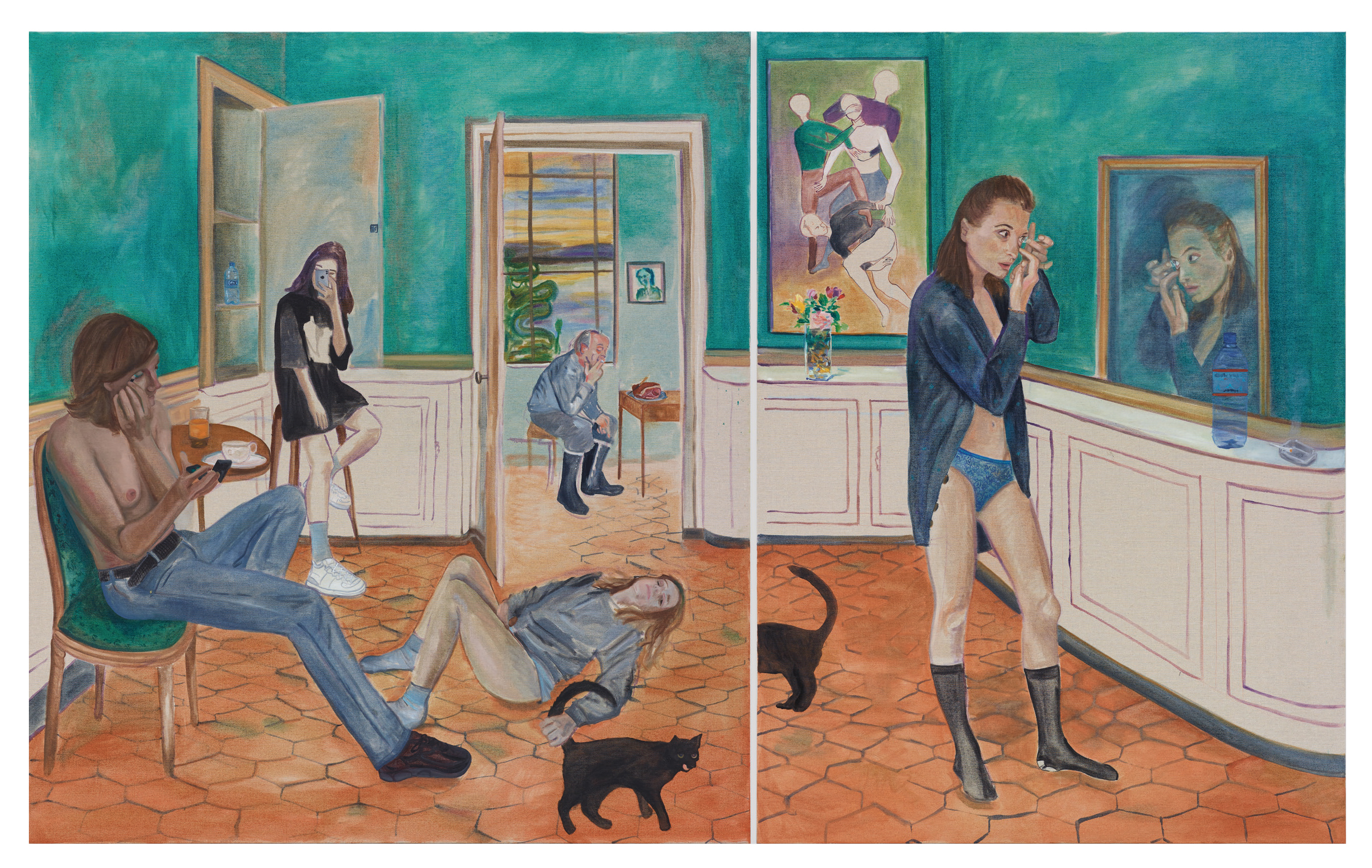 How would you describe what you do? I make paintings.

What’s the most exciting thing about where you are in your career right now? I can chose what to do and what not to do.

What’s on your mind right now? The atrocities of the war & the capacity of humans to become extremely violent when they are put in the wrong social conditions.

What do you think categorizes your artistic generation? I’m not sure but I’m right on the cusp between Gen X and Millennials, and I think that having a childhood without the internet or cell phones made a difference. Being connected didn’t mean to be online.

In an Instagram age do art books still matter to artists? Totally. Books are sort of eternal and make our mind think and see differently. Instagram is pretty superficial compared to an art library, isn’t it?

To see more of Mulleady's work, and that of the art world's most gifted next generation, order a copy of Prime: Art's Next Generation here.