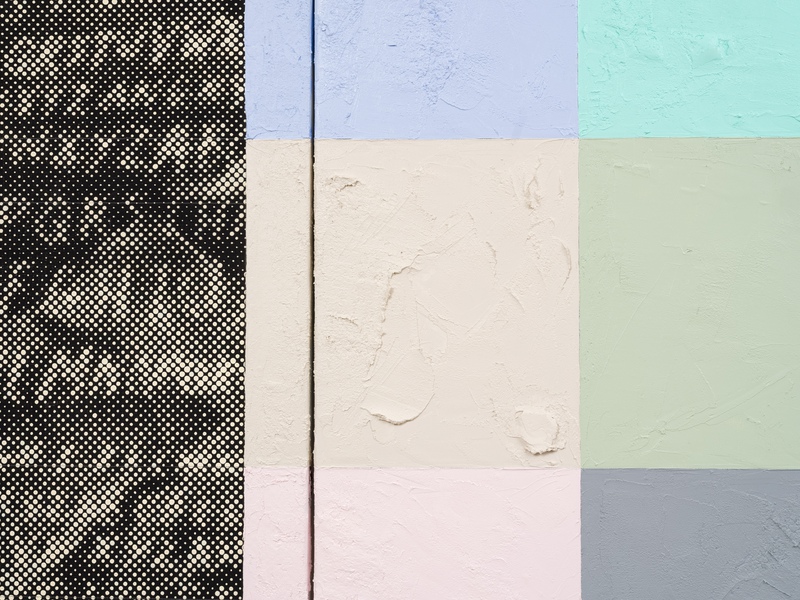 Manley’s practice is characterized by focused, repetitive, oftentimes labor-intensive techniques with an emphasis on systems of production as means of exploring and understanding cultural and political events. In 2016, Manley started developing his Elegy series, which marked a shift from analytical manifestations of the daily news formerly found in his New York Times paintings to more emotional and psychological expressions on the canvas, allowing himself to open up his gestures and movements as a means of processing collective and personal emotions.

The three triptychs in Model _______ follow a similar narrative arc that maps the artist’s ideation of his Elegy series, acting as a sort of prequel to his earlier works. The first panels are illusionistic paintings of Manley’s handwritten notes which have served as the foundation for many of his Elegy works. Using an imaginative linguistic game that experiments with the accumulation of meaning, Manley begins by writing out the alphabet, then stops at the first word that comes to mind, and picks up the alphabet with the last letter of that word until his mind stumbles upon the next word. In one instance, the automatic exercise unravels into a political rant that Manley calls a “letter to boomers” in which he confronts the generational gap between millennials and boomers:

The form of the first panels speak to their content—Manley inverts the employment of halftone by turning a traditionally industrial process into a handmade one so that a coherent image is visible only when seen as a whole while individual dots are—much like the singular alphabetical letters composing the notes—negligible bits of information. Perspective is thereby crucial in Manley’s work in that distance creates the illusion of a screen print and proximity reveals the artist’s hand, making the paintings essential to see in person. The process of accumulation echoes the Elegy paintings which are made up of independently insignificant marks that become significant when perspective comes into play.

Consisting of five to eight different colors that together create a seasonal palette, the second panels are colored grids that suggest the passage of time and space. The compositions loosely reference Shoji screens used to divide and separate space, and woodblock printed calendars whose color palettes are used to distinguish seasons, motifs the artist has been experimenting with for the past fifteen years. Manley uses the middle of the triptych as both a bridge and a dividing line between coexisting opposing elements in the first and third panels.

The final panels are chalk paintings, automatic and spontaneous like Manley’s alphabet game, that relieve the viewer from the meticulous calculatedness of the first two panels. Despite representing the present moment, the final panels harken viewers back to the past with the association between chalk and childhood, both of which are notoriously ephemeral. Together, the triptychs develop a circadian rhythm that breathes life into the work, three panels that usher the viewer from one moment to the next, leading viewers back to the beginning.

Model _______ is an exploration of four understandings of the word: of thought, as ideals, architecture and spatial models, and as citizens in society. Each panel represents movement through time, and together the triptychs weld into mirrors of the artist’s mind at different stages of his unique artmaking process. While each panel is formally different, ranging from gouache, acrylic, chalk, pastel and oil, to newspaper and linen, they read as a single, cohesive work that illustrates material and political complexities.

“Taken together what do we have?” writes Manley. “We have models of thought, models of time and models for a certain kind of historical experience. The past is projected and possibly altered. We play through it, struggling to get to the other side. Once we are there (here) we realize that it looks nothing like we thought it would and that our work isn’t finished.”