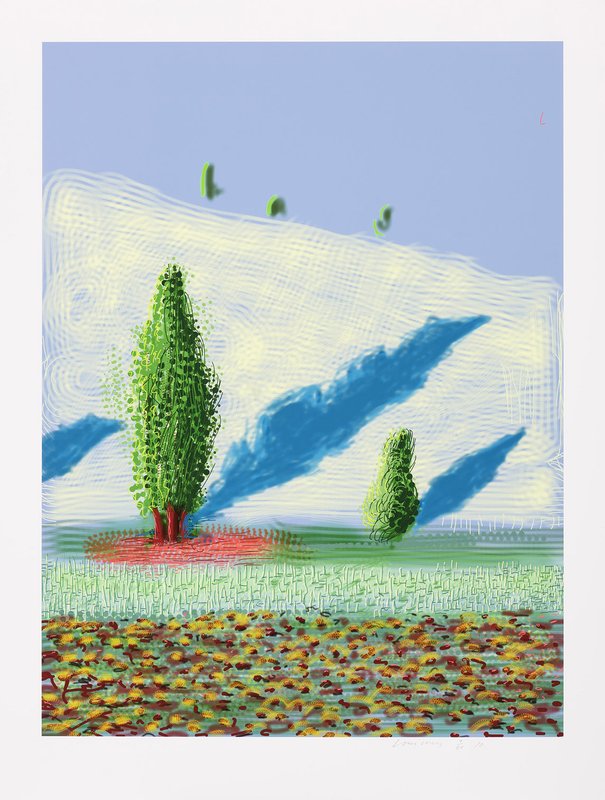 The David Hockney retrospective at the Tate Britain in London, which will move to the Centre Georges Pompidou in Paris and will  go to New York and Los Angeles, presents more than 200 of the most emblematic examples (paintings, drawings, photographs, engravings, videos, printed works and more) of his body of work. This exhibition proves, once again, to what extent Hockney's art has always been a blend of tradition and innovation, of homage and invention, drawing on the most recent technology - over the years the artist has used polaroid cameras, fax, photocopiers, computers and touch-screen tablets.

Between 2010 and 2011, working with an iPad, Hockney created a series of landscapes from the Yosemite National Park in California, capturing the silence of the nature – bare expanses and dense forests – as well as the movement of the visitors. Each drawing, composed with his finger on the screen, is printed in a limited number of copies. Of the 29 works that make up this series, 24 are printed on single sheets of paper (94 x 71 cm) while five of them, in a larger format, are produced in four panels mounted on Dibond (236 x 178 cm).A catalogue (Repères n°169) with a text by Alfred Pacquement, reproducing the 29 works will be published.