10 Artists Who Electrified the Guggenheim's Rotunda, From Barney to Buren 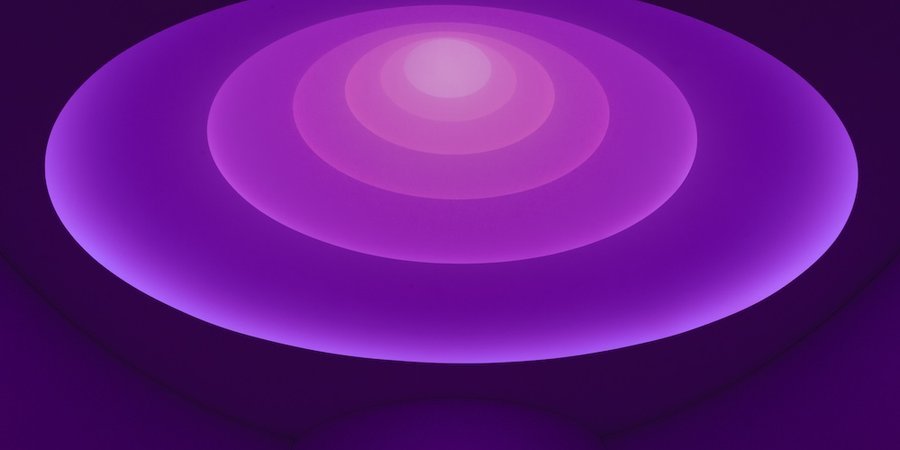 James Turrell's "Aten Reign," currently on view at the Guggenheim

For his newly installed work Aten Reign, James Turrell combined purple, blue, and red LED lights with natural sun rays from the museum’s oculus to transform the interior of the Guggenheim's rotunda into a transcendent, phenomenological experience. Turrell, who has also been reconstructing Arizona's volcanic Roden Crater into an observatory since 1979, isn’t the only artist to dramatically engage with Frank Lloyd Wright's spiraling architecture, however. Here are ten other artists who, throughout history, have transformed the Guggenheim with ambitious installations.

Most people know not to touch the artworks in museums, but Carl Andre would ask them to think differently. For 37 Pieces of Work (1970), Andre invited museum visitors to walk on top of his flat aluminum, checkerboard-patterned sculptures, asking them to experience the feeling of different materials. Emblematic of the Minimalist movement, this installation forced viewers to see the museum in new ways, and to appreciate the floor, a space nobody gives much thought to, as a work of art.

Who cares about a rotunda with a view anyway? Buren brought his institutional critique-inspired agenda to the museum in 1971 with Photo-souvenir: Peinture-Sculpture, a massive pinstriped banner that hung from the oculus. A seemingly benign sculpture with a more sinister agenda, the work asked viewers to rethink the museum’s space by obscuring views of other artworks and the architecture. Apparently, Buren’s sculpture performed its task—Dan Flavin and Donald Judd complained that the sculpture blocked views of their work, and the Guggenheim ultimately removed it. (Buren got his vindication in 2005 when he transformed the entire museum into a series of site-specific installations, this time without the wrath of his peers.)

Though the rock composition Red Slate Circle (1980) may bring to mind images of the desert, Long’s sculpture is less representative of a landscape than it is symbolic of the paths Long took when he visited a desert. Installed in the Guggenheim, the sculpture transports its viewer out of the museum space and into a more personal realm evocative of the artist’s experience.

“You are a victim of the rules you live by,” reads one of Holzer’s conceptual Truisms, a series of one-liners that were displayed on LED-lit tickers on each ramp of the rotunda during her 1989 installation about the varying meanings of truth.

The husband-and-wife duo Oldenburg and van Bruggen brought their oversized “soft” objects to the Guggenheim with Soft Shuttlecock (1995), their playful take on a game of badminton gone awry. As part of their retrospective, a gargantuan birdie appeared to be lodged in the balcony of one of the museum’s ramps, a reminder that the museum space is meant for pleasure in addition to philosophizing.

Beecroft’s “VB35 ‘Show’” garnered controversy for its cold dissection of the fashion world when it was performed in 1998 in the lobby of the Guggenheim’s rotunda. The performance, which involved 15 models sporting Gucci high heels, ten of whom wore bikinis and the other five who wore only makeup, encouraged viewers to confront the sexism of the fashion industry firsthand by asking museumgoers to walk between the models without interacting with them. Beecroft turned the Guggenheim into a large stage and her performers into art objects, asking valuable questions about the fashion businesss in the process.

Lasers, projections, and TVs filled the Guggenheim rotunda in 2001 when Nam June Paik installed Jacob’s Ladder, seven laser projections that led upward to Sweet and Sublime, a series of geometric images projected onto the rotunda's oculus. Paik imbues the TVs with a spiritual quality, granting an everyday object an elegant otherworldliness typical of the Fluxus movement.

One might be considered lucky to see any one of Barney’s five Cremaster films in a lifetime, but visitors to the artist’s 2003 mid-career retrospective were especially fortunate—they got to see Cremaster 3 four times simultaneously. Barney’s contribution to the Guggenheim rotunda was a multi-TV loop of “The Order,” a scene from Cremaster 3 that was filmed in the Guggenheim itself, and that allegorizes its five floors as five stages of sexual and bodily transformation.

Museum visitors at Tino Sehgal’s 2010 exhibition were not allowed to snap photos on their iPhones, and by the end of the exhibition they knew why. Sehgal’s performances Kiss, for which two dancers passionately kissed on the floor of the lobby, and This Progress, a guided tour leading up the rotunda that literally asked visitors questions about what it meant to progress, were about stripping life down to its very basics and rebuilding from that philosophical absolute zero. Appropriately, the two performances were the only art in the museum at the time, an ethereal, reductionist take on the museum’s architecture.

10 Artists Who Electrified the Guggenheim's Rotunda, From Barney to Buren