An Introduction to Feminist Art 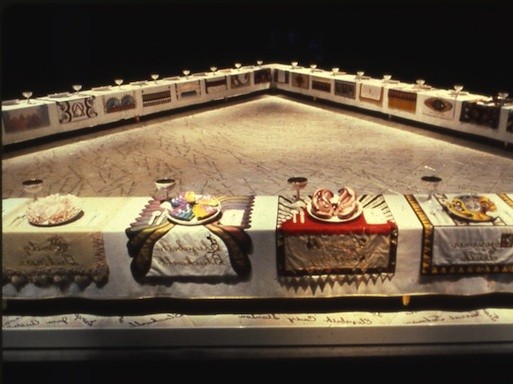 Judy Chicago's "The Dinner Party," installed at the Brooklyn Museum

Feminist art emerged as a major force in the 1970s when the Women's Art Movement, a branch of the Women's Liberation Movement, set out to prove that "the personal is political" with a sharp eye for social critique and a tongue-in-cheek sense of humor. Mary Beth Edelson recreated the Last Supper with Georgia O'Keeffe as Jesus, Sylvia Sleigh painted nude and reclining male artists, and Judy Chicago took out an ad in Artforum to announce her divestment of her father's name, Gerowitz.

Although female performance artists like Yoko Ono and Carolee Schneemann began making works about their bodies in the late 1960s, second-wave feminism served as an impetus for an explosion of feminist artmaking. These artists aimed to create positive images of women through tactics like role reversal, recovering female artists from history, and validating women's craft traditions. In 1971, art historian Linda Nochlin posed the question "Why have there been no great women artists?" in her landmark ARTnews essay of the same name, and that same year Judy Chicago and Miriam Schapiro established the Feminist Art Program at CalArts, the first of its kind. In 1972, AIR Gallery—the first all-female cooperative gallery in the United States—opened, with involvement by artists such as Louise Bourgeois and Nancy Spero.

In the late '70s and early '80s, a second camp of artists that included Cindy Sherman, Sherrie Levine, Martha Rosler, and Mary Kelly took a different approach to addressing feminist issues. Creating positive images was no longer enough-these artists, informed by postmodern and psychoanalytic modes of thought, aimed to get to the heart of representation. Levine, Sherman, and Barbara Kruger, among others, used photography to expose the significance of images and the media in shaping cultural attitudes. In the '90s and 2000s, another generation of feminist artists emerged, including such figures as Deborah Kass, Ghada Amer, Tracey Emin, and Amy Sillman, who both drew inspiration from and expanded the legacy of feminist art pioneers.

The last few years have seen increased attention paid to the history of feminist art. Major museums have hosted extensive surveys devoted to female artists, including WACK! Art and the Feminist Revolution at L.A. MOCA and MoMA PS1, MoMA's Modern Women project, and elles@centrepompidou, and in 2007, the Elizabeth A. Sackler Center for Feminist Art opened at the Brooklyn Museum, with Judy Chicago's iconic installation The Dinner Party as its centerpiece. Explore this collection for a primer on feminist artists available on Artspace.

An Introduction to Feminist Art