A History of Art & Fashion Collaborations 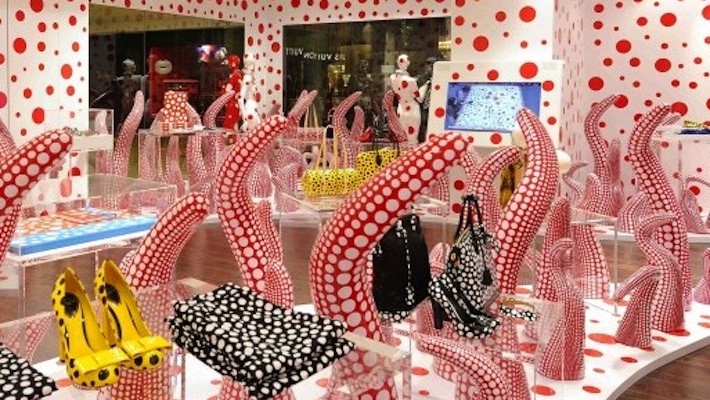 An Image of a Louis Vuitton and Yayoi Kusama Concept Store, Summer 2012

Over the past decade the number of collaborations between fashion designers and contemporary artists has increased to a dizzying degree—in fact, the marketplace is now saturated with unique hybrid efforts of this kind. While the crossover of fashion and art is hardly a new phenomenon, the nature of these partnerships differs greatly from those of the past. To cast some light on this evolution, we took a look back at how the relationship between fashion and art has changed over time.

Perhaps the most prominent early example of an artist-and-designer collaboration is Elsa Schiaparelli’s work with Salvador Dalí and the Surrealists. The Italian designer’s creative fashions of the 1930s were inspired by and, in some instances, conceived in collaboration with a group of Surrealists including Jean Cocteau, Christian Bérard, and, most notably, Dalí himself. While Bérard and Cocteau’s art served more as an inspiration for Schiaparelli’s independent creations, Dalí and the designer produced what are often noted as the first true hybrids of clothing and art in a collaborative manner. The partnership resulted in two of Schiaparelli's most iconic garments of the 1930s: the Organza Dress With Painted Lobster (1937) and the Tear Dress (1938), as well as the notorious Shoe Hat from her Winter 1937 collection.

These designs are often cited as a milestone in the history of both art and fashion. In her autobiography, Schiaparelli declared herself first and foremost an artist, regarding dress design “not as ‘a profession, but an art.” The fact that she sought inspiration from her close friends and avant-garde artists in the Surrealist movement and evoked major Surrealist themes in her designs was a natural extension of this belief.

Scholars agree that the 1960s marked an important turning point in the relationship between art and fashion, specifically with the evolution of Pop Art. Pop artists loosened the distinction between high and low culture by adopting images and inspiration from popular culture in an active rebellion against the dominance of Abstract Expressionism. Artists in the 1960s experimented with new mediums, invoked fashion to reflect their own personalities, and promoted the concept that anything—even mass-produced items—could be art.

Fashion designers in the 1960s simultaneously ventured on a mission to democratize fashion, eradicating its association with the arts elite by finding inspiration in popular culture. Thus, fashion and art were united through common goals of making their work accessible to the masses and rejecting traditions of the past.

At the forefront of the movement uniting art and fashion were Andy Warhol and Yves Saint Laurent. Warhol began his career as an illustrator for fashion magazines, and Hollywood, fashion icons, and contemporary notions of style continually informed his work. For example, Warhol’s Campbell Soup can imagery from his paintings and silkscreens prompted the company to collaborate with the artist on a "groovy" series of a-line paper dresses in 1966-67 under the title “The Souper Dress,” which were meant to be discarded in a nod towards modern consumerism.

Yves Saint Laurent, meanwhile, was notably inspired by fine art for his Mondrian Dress from 1965. Just as Pop artists appropriated advertisements and consumer culture in their work, Saint Laurent’s reference to Mondrian was equally obvious. The following year, Saint Laurent sent his Pop Art collection down the runway for Autumn/Winter 1966-67, which included imagery reminiscent of Tom Wesselman paintings.

A pivotal moment for fashion came in 1982, when then Artforum editor Ingrid Sischy put an image of a model wearing an outfit by designer Issey Miyake on the cover of the magazine’s February issue, solidifying fashion’s elevated status and new alliance with advanced art. This moment sparked a trend of fashion exhibitions being presented at distinguished museums, an official form of recognition of fashion as a worthy form of cultural expression. The Metropolitan Museum of Art’s 1983 Yves Saint Laurent retrospective curated by Diana Vreeland was then another groundbreaking event, radically presenting current fashions rather than historic costume. From that point on, top museums around the world increasingly began to organize fashion exhibitions, and today, these thematic and/or retrospective exhibitions are a dime a dozen.

As museums increasingly erected fashion exhibitions that deified designers, designers themselves were drawn closer to artistic practice. The growing number of avant-garde designers took inspiration from Paco Rabanne, who in the late 1960s experimented with new materials not previously considered appropriate for luxury fashion, like plastic and metal. Thinking more thematically about each new collection, designers such as Hussein Chalayan, Viktor & Rolf, Rei Kawakubo of Comme des Garçons, Mason Martin Margiela, and Yohji Yamamoto emphasized the conceptual aspect and often paid scant attention to the commercial side of their practice.

As conceptual fashion matured, the museum show and the runway show became equally important sites for the display of fashion in the 1990s. In an effort to reject the commercial associations of the clothing industry, the fashion show evolved into a new hybrid of performance art, such as in the over-the-top, sci-fi productions of Alexander McQueen.

Artists in the late 1980s began to look to fashion and fashion marketing for inspiration, often incorporating objects of fashion into their art or using it to convey the message behind their art. This practice was championed by artists including Sylvie Fleury, Cindy Sherman, Vanessa Beecroft, and Barbara Kruger.

In 2001, Marc Jacobs collaborated with artist Stephen Sprouse on a line of graffiti-splattered handbags for Louis Vuitton, resulting in sold-out editions around the world and increased demand for similar products. This partnership sparked a trend in fashion designer and artist collaborations, resulting in a flood of similar alliances over the past decade. There is no indication that the growth of artist and luxury fashion brand collaborations will plateau in the near future, and one can only look forward to watching how the creative geniuses of our time continue to work together on unique and innovative endeavors.

A History of Art & Fashion Collaborations