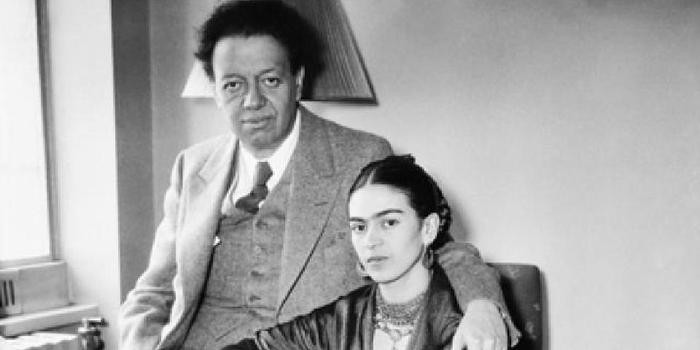 Every artist needs a muse, right? If you’re Damien Hirst, it’s taxidermy. If you’re Monet, it’s pond flowers. If you’re William Wegman, it’s Weimaraners. But throughout history, plenty of artists have drawn creative inspiration from sources a little closer to the heart. Some art-world romances resulted in lifelong bliss and years of collaboration, while others didn’t work out quite as well. While artist-on-artist romances have been mythologized in various forms—from Hollywood blockbusters (Pollock, Frida, Midnight in Paris) to paintings—we’ve compiled our own list of the sweetest and steamiest real-life art-world romances.

Famed writer and Modern-art patron Gertrude Stein hosted legendary salons for the Lost Generation of American expats in flapper-era Paris with her partner, the avant gardist and cookbook author Alice B. Toklas. Together, they collected Picasso, Cézanne, and Matisse, as well as the admiration of writers like Hemingway, Fitzgerald, and Joyce.

When these two Surrealist painters met in 1942, Tanning was a fashion illustrator at Macy’s and Ernst was a famous artist married to the eminent art patron and gallerist Peggy Guggenheim. Under the pretense of scouting work for a show called 30 Women at Guggenheim’s gallery Art of this Century, Ernst made a visit to Tanning’s studio. He would go on to convince Guggenheim to not only include Tanning’s piece in the show, but to change the title to 31 Women. Four years later, Tanning and Ernst married in a bizarre double ceremony with the artist Man Ray and his muse Juliet Browner.

Frida Kahlo wrote to painter Diego Rivera early in her art career seeking advice. What she got was one of the most notoriously turbulent romances in the history of art. The Communist couple first married in 1929, but during their union Kahlo supposedly had trysts with sculptor Isamu Noguchi, Parisian cabaret icon Josephine Baker, and Communist leader Leon Trotsky, while Rivera had an affair with Frida’s younger sister. They divorced in 1939 only to be remarried a year later and spent the rest of their lives more or less together, though in separate bedrooms.

At the very beginning of her career, painter Georgia O’Keeffe exhibited drawings and paintings at photographer Alfred Stieglitz’s historic 291 Gallery in 1916 and 1917. Although Stieglitz was 23 years her senior—not to mention already married—the two started an affair when she moved to New York in 1918. The couple wed six years later and Stieglitz made over 350 portraits of her over the course of their marriage, including the oft-exhibited portraits of her hands.

These two Abstract Expressionist painters met in 1942 at an exhibition including both of their work. Their marriage was a passionate splatter of liquor and paint until Pollock’s penchant for extramarital affairs caused discord. In the last years of his life, Pollock was involved in a tête-à-tête with Ab Ex muse Ruth Kligman (who would go on to be involved with Willem de Kooning, who was married to fellow painter Elaine de Kooning). Kligman was the only survivor in the car crash that killed both 44-year-old Pollock and Kligman’s friend Edith Metzger. After Pollock’s death, Krasner continued her own career and maintained the artist's estate. Today, the Pollock-Krasner foundation provides grants to working artists.

Avant-garde composer John Cage and dancer/choreographer Merce Cunninghan met in Seattle in 1938 when Cage was an accompanist for Cunningham’s dance class. That year, Cunningham moved to New York to join Martha Graham’s company. Three years later Cage also moved to the city, ended his marriage, and began an affair with Cunningham. Early in their relationship, Cage composed piano works for his lover, with Cage ultimately becoming the musical director of the Merce Cunningham Dance Company. The two would go on to spend their entire lives together.

Robert Rauschenberg had affairs with fellow Neo-Dadaists Cy Twombly and Jasper Johns in the ‘40s and ‘50s. Rauschenberg met Twombly when he was a student at New York’s Art Students League and encouraged the younger artist to attend the now-legendary Black Mountain College. A few years later, Rauschenberg met Johns at a party and the two were involved for the next eight years. After a bitter breakup, both men left New York and didn’t speak for a decade.

At the very beginning of his career, renowned minimalist Robert Morris was involved with dancer/choreographer Yvonne Rainer and collaborated with her on proto-minimalist stage constructions for her performances. Later, he had a relationship with prominent art historian, critic, and October magazine co-founder Rosalind Krauss. At the time, she was writing numerous essays about the emergence of Minimalism and in 1992, she curated a retrospective of Morris’s work at the Guggenheim. In her 2000 article “Minimalism and Biography,” art historian Anna C. Chave called Krauss and Morris out for never acknowledging that their romance was critical to both of their careers.

Both born on June 13, 1935, these two met in Paris in 1958 and worked collaboratively for the next 50 years until her death in 2009. They are most famous for their transient environmental works, which have included The Gates in Central Park, wrapping the Pont Neuf with plastic material, and surrounding 11 islands off the coast of Miami in bright pink fabric. Jeanne-Claude often told reporters that the two never took flights together so that if the plane went down, one of them could continue their work.