When to Start Drinking at an Art Fair 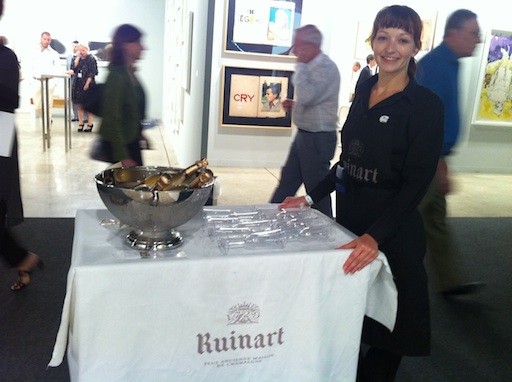 A Ruinart champagne cart at the fair

With art fairs proliferating around the globe at an astonishing clip, each vernissage finds new first-time attendees confronted by a question that has bedeviled countless habitués of these glitzy market events: When is it appropriate to start drinking at an art fair? With champagne flowing freely inside the fair and the sun shining outside, it can be hard for the uninitiated to judge. In the interest of getting a range of expert opinions on this topic, we've sounded out a range of veteran art professionals for their words of hard-won wisdom. Read their takes below (and don't forget to bring the aspirin).

"After you bump into the tenth nodding acquaintance you've seen, à la Ground Hog Day, at every art fair on earth for the past ten years, give or take. Actually, make that after the first sighting." — Art + Auction art-market reporter Judd Tully

"I suggest a bloody mary at breakfast to get you warmed up and in the mood.... then wine with lunch.... a trip to the VIP room for something stronger around 3 or 4 p.m. (preferably with a client), and then starting at 5 p.m. drink whatever you want for as long as you want. Follow this plan 'til Sunday the 9th of December. You will then be in good form for the rounds of Holiday parties you will inevitably go to. Bonne chance!" — Chicago art dealer Rhona Hoffman

"It depends what is being poured, of course. If it's Ruinart, then I'm in for mid-morning deliciousness as the bubbles keep me in a bubbly mood. Anything else and I'm going sober as it's just too hard to keep my energy going through the fair, meetings, parties, dinners, et cetera." — Creative Time director Anne Pasternak (who, it should be noted, is hosting a champagne brunch with Ruinart during the fair)

"There is no food to be had in the city of Miami for the duration. The upside to this is that on an empty stomach, a single absurdly expensive $25 glass of Champagne will get the job done—so splurge early. And good luck finding that mythical falafel place later." — New Yorker art journalist Emma Allen

"When it is free and you want to fit in with the supposed In crowd of societal outcasts." — Artist Hank Willis Thomas

“I never drink at art fairs because I am too busy navigating the endless corridors with trustees to even think about it. But I definitely grab a stiff one immediately after to recover!” — A museum director who requests to remain anonymous

"Being at an art fair without alcohol in your veins is like being in New York during Art Basel Miami Beach—it's almost impossible to bear. So there's no starting time—it's just a continual top-up. Or maybe that's just my British i've-been-at-too-many-art-fairs attitude!" — New York art dealer Helen Toomer Labzda

"Given that I now live on an island where it is a social faux-pas to be not carrying your Tevas to all social events—customized with one's initials or, even better, the name of your boat—and where, when you leave a bar, the bartender asks if you'd like a "traveller" (that is, a top-up to finish off in the car, while you are driving, on your way home), I have to re-adjust my head to mainland thinking: ergo, that there is ever a time when it is actually inappropriate to drink." — Volta Art Fair co-founder Amanda Coulson, who lives in the Bahamas

"The first time I question whether a woman visiting our booth is a collector or a prostitute." — A female New York art dealer, who requested anonymity

"The best time to start drinking is about an hour before going in, as a rule." — Artist Sean Capone

"During about three months of training before December, preferably with a mix of cocktails. And the mix of cocktails should be wide-ranging, more like training for ironman triathlon rather than a marathon." — Artist Franklin Evans

"Write and work the week sober until the Saturday morning mimosas at the Sagamore. Then have three." — Art journalist Alexandra Peers

"The first time a collector asks me who he or she should buy—especially if they ask for a written list—who has never supported our nonprofit organization or artist projects we love. I swear that's not insulting." — The director of an Los Angeles-based nonprofit, who requested anonymity

When to Start Drinking at an Art Fair