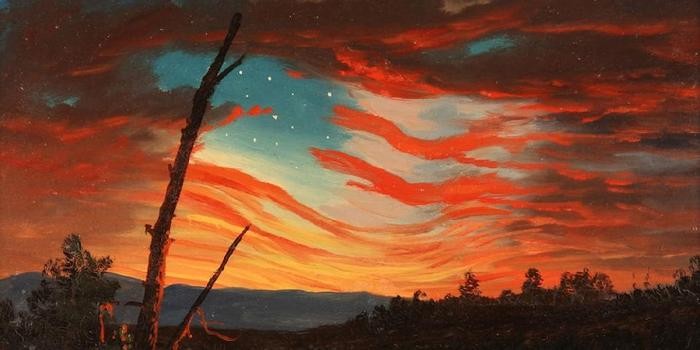 Our Banner in the Sky (1861) by Frederic Edwin Church

“America I’ve given you all and now I’m nothing,” wrote Allen Ginsberg in his 1956 poem “America,” a decidedly unpatriotic ode to his home country in which Americans are closeted Communists and obsessive readers of TIME magazine. Ginsberg was just one of many who felt that America had not lived up to its promise. How did so many artists come to treat America and its culture with such cynicism? The Metropolitan Museum of Art’s “The Civil War and American Art,” which runs through September 2, begins to provide an answer to that question.

“The Civil War and American Art” marks a critical moment in American art history when Americana is no longer nostalgic or light-hearted. Instead, paintings like Frederic Edwin Church’s iconic Our Banner in the Sky, a sunset that forms an American flag with its colors, depict Americana in crisis: Church’s rendition of the American flag seems to have faded away, and the rich reds and oranges appear to have lit the American flag on fire. Other artists in the exhibition take a less symbolic approach. Timothy H. O’Sullivan's and George N. Barnard’s photography shows the antithesis to American landscape painting—destroyed vistas riddled with maimed bodies and discarded armaments.

Whatever approach is taken by the artists of “The Civil War and American Art,” the result is always the same: a disfigured, distorted version of the Americana of the years before the Civil War. The artists’ new rendition of American culture is the result of a search to find an appropriate visual language for a struggling nation in the aftermath of a devastating conflict.

The vision of Americana created during the Civil War continued to persist into the 20th century with the work of documentary photographers such as Paul Strand and Dorothea Lange. whose iconic depictions of the Great Depression show America in the midst of impoverishment and decay. Strand’s American House, Ghost Town, Colorado, 1931, for example, juxtaposes a boarded up house with a picturesque sky above it. The house’s inscription reads, “AMERICAN HOUSE,” suggesting that this failure to achieve the American Dream is an everyman’s plight: this house could belong to anyone. Strand’s photograph memorializes the attempt to achieve a perfect America, a theme artists continue to incorporate today.

Jasper Johns continued Strand’s themes with his 1954 allegory Flag, perhaps the most important work of Americana in art history. Johns’s version of the American flag is made out of newspaper, allegorizing the flag as representing dreams past.

More recently, artists have appropriated iconic symbols of Americana, such as the flag, to address issues of racism and discrimination. Nari Ward, John Outterbridge, and Hank Willis Thomas are among the many artists to rethink distinctly American imagery in order to show the rejection of minorities from a larger American society. Kara Walker even brings this discussion of Americana full circle by appropriating Civil War lithographs and combining them with violent imagery to depict the persistence of racial stereotyping. Towards the end of his career, Andy Warhol turned to iconic symbols of Americana in works such as his screenprints of Teddy Roosevelt and Native American imagery, and Warren Neidich has devoted an entire series to using M.C. Escher-like abstractions to distort the American flag.

Though the Met's show addresses the distant past, the issues of national representation it confronts continue to be relevant in the present.