Wangechi Mutu on Art, Life & Everything In Between 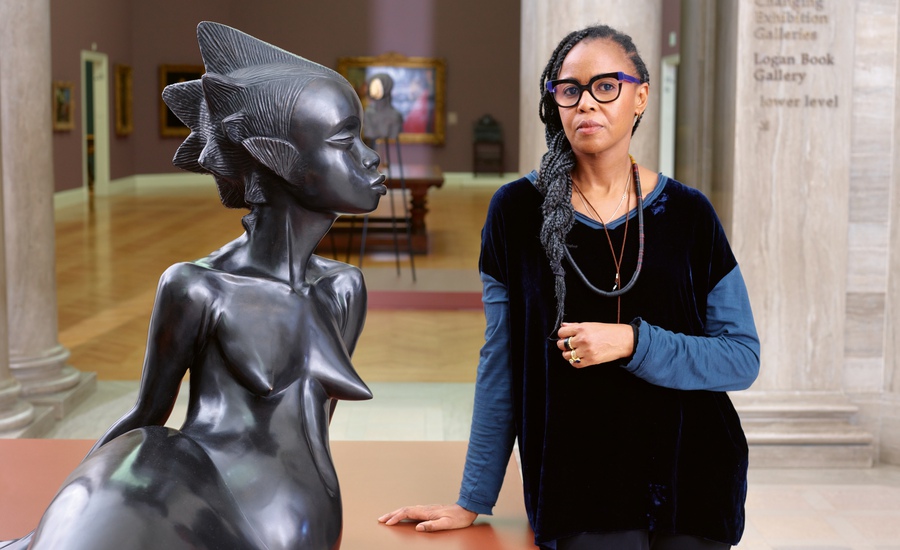 Wangechi Mutu has a problem with art. Or perhaps that should be a problem with the way we think about art. As the Kenyan-American sculptor, painter, filmmaker and performance artist points out, “historically, most of the world’s art isn’t on a canvas, or in a frame.”

“I am very much a believer that the limitations that we've placed upon what art represents – like, ‘Art is a painting’ or ‘Art belongs in a museum’ – have a lot to do with colonization and the attempt to own things that are sacred and un-ownable” Mutu tells the art historian, Courtney J. Martin, in Phaidon’s forthcoming Wangechi Mutu monograph. (You can reserve a signed copy here).

“The most dominant idea of acceptable art is the art of the European canon. Everything else is Voodoo, is lesser than, is craft, is folklore, is anthropology. Who knows who made these terms up?” 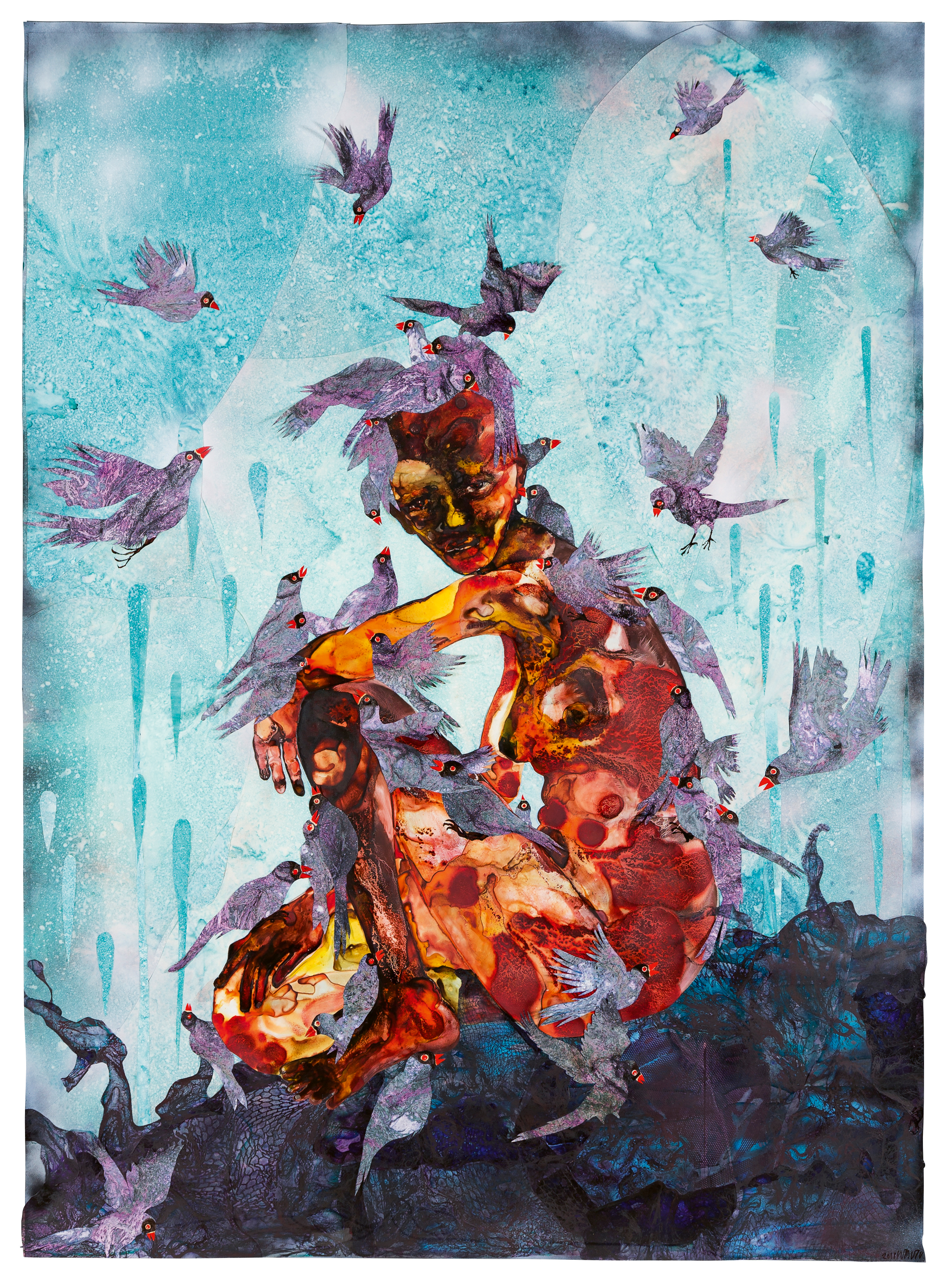 That remains an open question, even if, thanks to Mutu’s work, those terms have become a little easier to ignore. She was born in Nairobi on 22 June 1972, into a middle-class family with some artistic inclinations, as well as some earthier interests and preoccupations that would serve the artist well in later life. Her mother was a nurse and midwife, who worked at a number of prominent hospitals in the Kenyan capital, running the central sterile services departments, before later opening a pharmacy.

“It’s part of why I’m so intrigued by diseases and bodies and biology and scientific illustrations and anatomy and drawing the body,” the artist says in her new monograph. “I think it comes from there.”

The artist’s father studied political science in the United States, and has been a professor, a poet, a teacher and a businessman – during Mutu’s childhood, he ran a paper importer. This paternal conflict between creative expression and financial security animated Mutu. 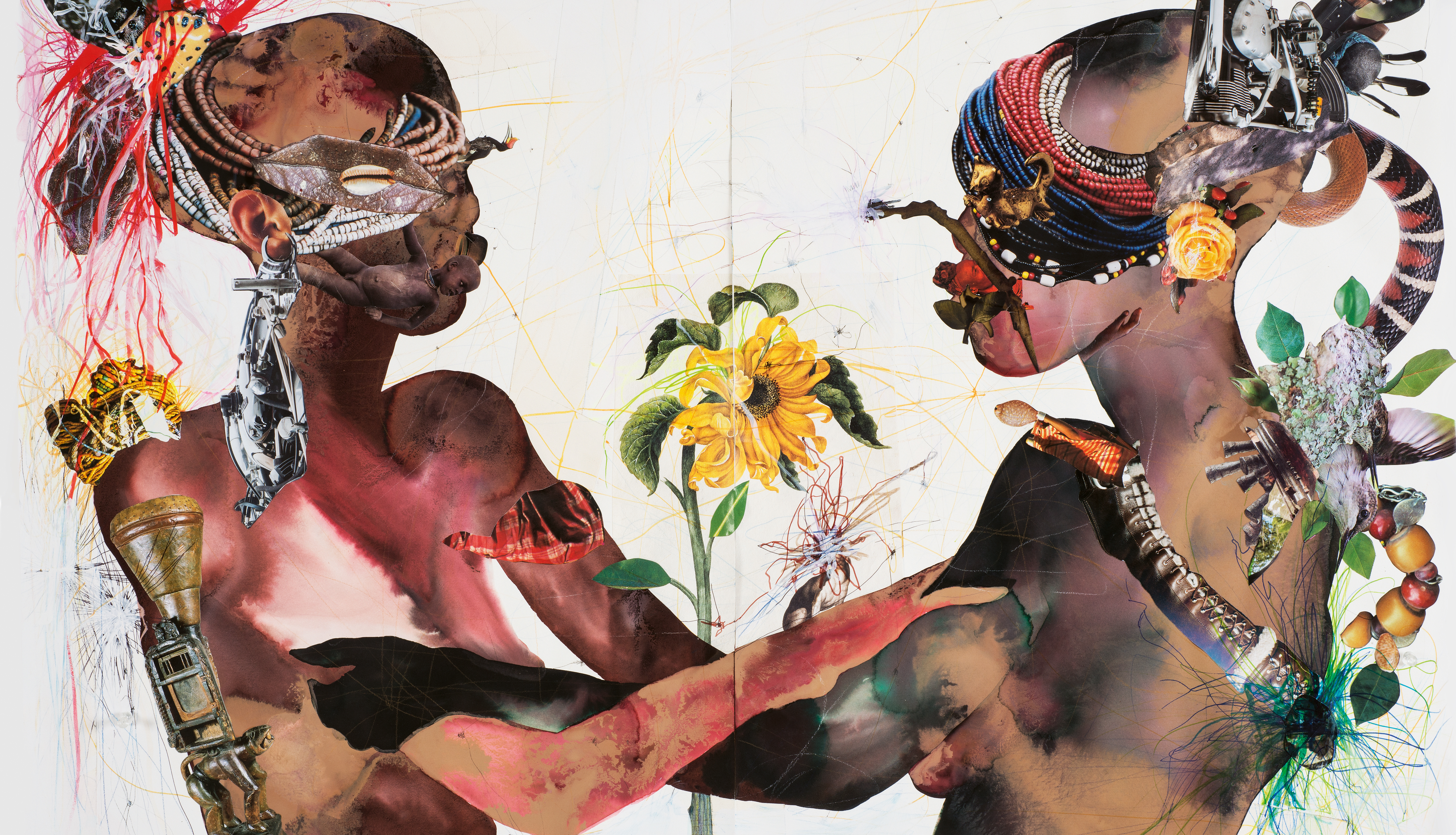 Wangechi Mutu, You Are My Sunshine, 2015

In the new book, she recalls how, as a child, she looked at her father (who at the time was around forty), and thought, “If I get to be as old as him and I’m not doing what I love doing, I’m going to take that steering wheel and do a U-turn and go and figure something else out.”

Adolescent interests in music, synchronized swimming, reading and drama, alongside art were nurtured first in Nairobi, then at the prestigious, internationalist Atlantic College in Wales, where she studied as a teen. Moving to New York in the 1990s, she went on to study at Parsons and the New School, before receiving her BFA from Cooper Union, and completing her MFA in sculpture at Yale.

In the early 2000s, via her hugely accomplished collage and watercolor-on-paper works, Mutu established something of a recognisable style. Here, notions of race, gender and ecological imbalance playout in chimeric, bionic figures that seem at once ancient and prescient. 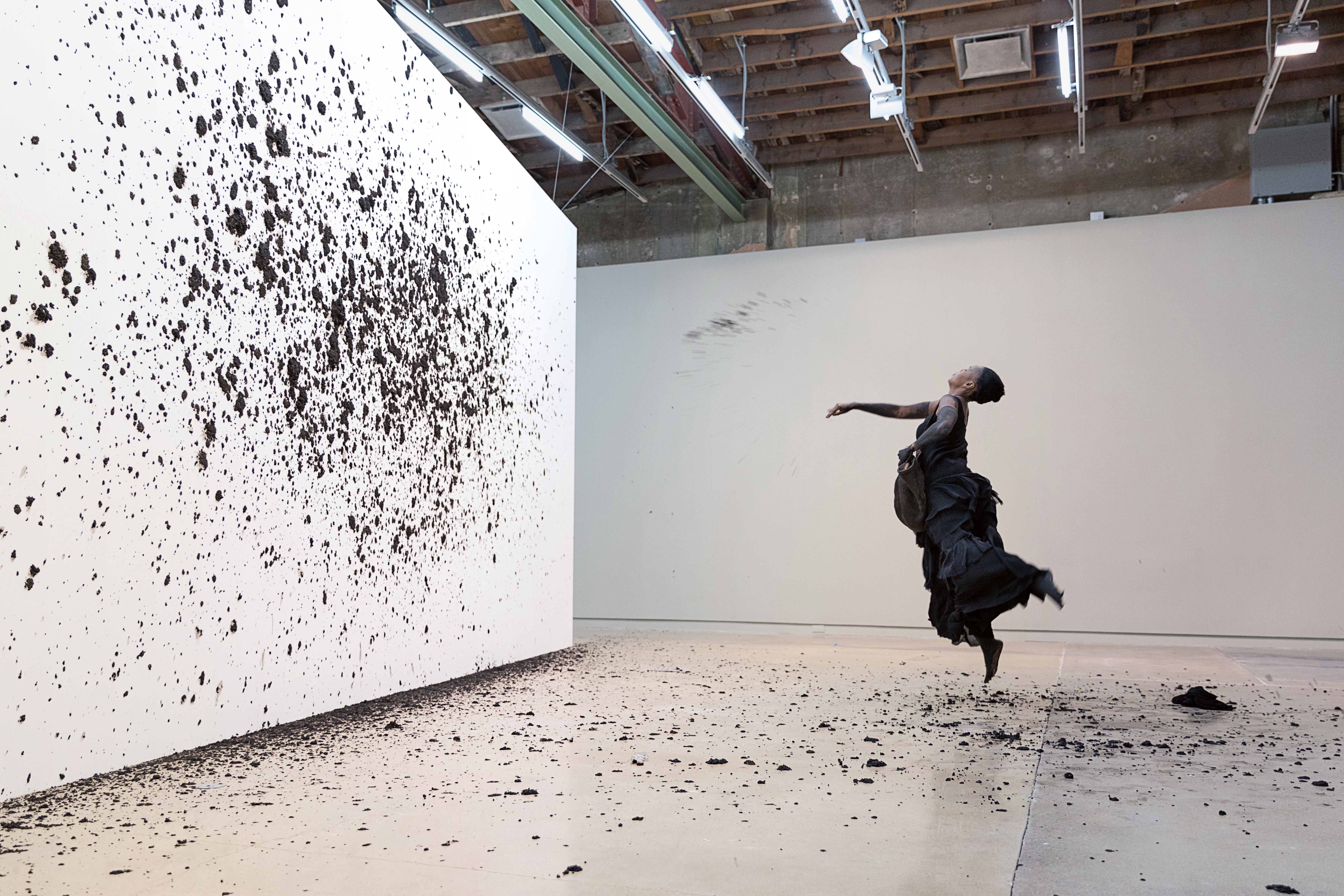 Yet Mutu refused to limit herself to wall works. In her 2006 installation Exhuming Gluttony: A Lover’s Requiem - created in collaboration with the Ghanaian-British architect David Adjaye - she combined animal pelts with wood, wine bottles, packing tape and blankets to create a rich, fetid, decadent, carnal, almost overwhelming installation. For her 2015 sculpture, She’s got the whole world in her, Mutu mashed a stew of old paper onto a monstrous, prone figure staring at a hanging globe. This latter work, chosen by the late Okwui Enwezor for the 2015 International Art Exhibition at the Venice Biennale, seemed perfectly apt for that show’s theme: All the World’s Futures. Having understood and mastered both the art world, Mutu shows what lies beyond the white cubes. 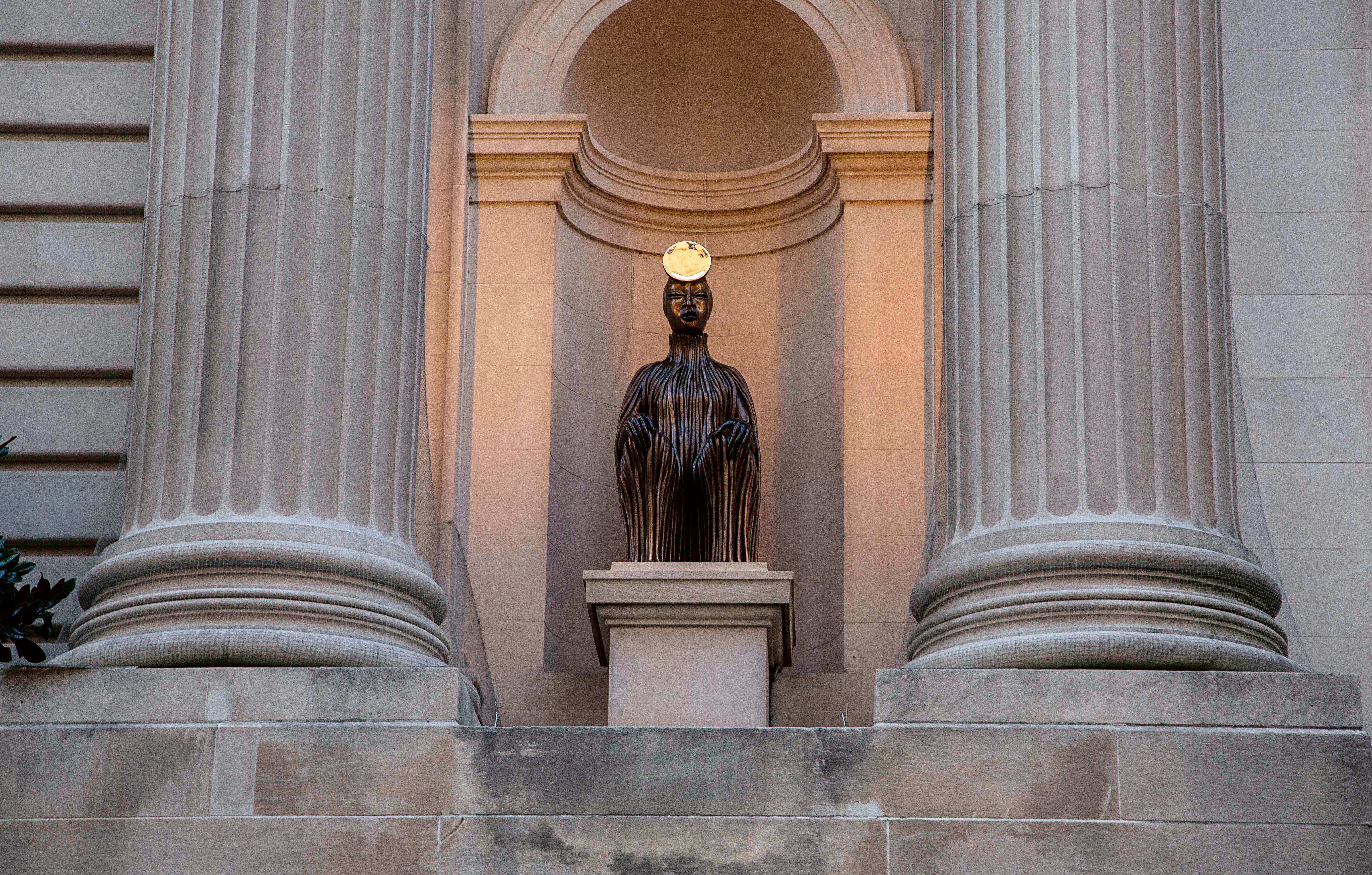 Wangechi Mutu, The Seated II,  from The NewOnes, will free Us 2019

A quartet of equally timely works appeared on the Metropolitan Museum’s facade towards the end of 2019, just before the onset of the Covid pandemic. These bronze works, entitled The NewOnes, will free Us, adopted elevated, regal positions within the Met’s neoclassical exterior, but call the centrality of that ancient, European architectural lineage into question, via traditional, African motifs and status adornments, such as polished head and lip plates, which reflect sunlight back at passers by.

Lockdown and its aftermath meant that these haughty bronze figures were in place for longer than the Met had intended, and, in staying in place, “they had carried the power that this pre-pandemic/post-pandemic moment has exuded,” Mutu says in her new book, “the power of the reiteration of human rights, social justice, environmental awareness, as well as the kismet that came with the severity of the conditions that they were made in.”

Mutu, a mother who both prizes and understands the pain of childbearing, likened these figures to the transformative power of raising sons and daughters. “They are a little bit like children who come at exactly the time, giving you that bridge between the thing that you’re not able to get through and the thing that you must go through,” she says, “They just force you, the viewer, to cross the street and come closer.”

The Met’s bronzes, like much of Mutu’s work, both confront and beckon; equally futuristic and antique, they reveal what the global majority has in store for us. Reserve a signed copy of Phaidon's forthcoming Wangechi Mutu book here.

Marcel Dzama on Art, Life & Everything In Between
Read More ▸

Rashid Johnson on Art, Life & Everything In Between
Read More ▸

Jenny Holzer on Art, Life & Everything In Between
Read More ▸

Ed Ruscha on Art, Life & Everything In Between
Read More ▸

Wangechi Mutu on Art, Life & Everything In Between