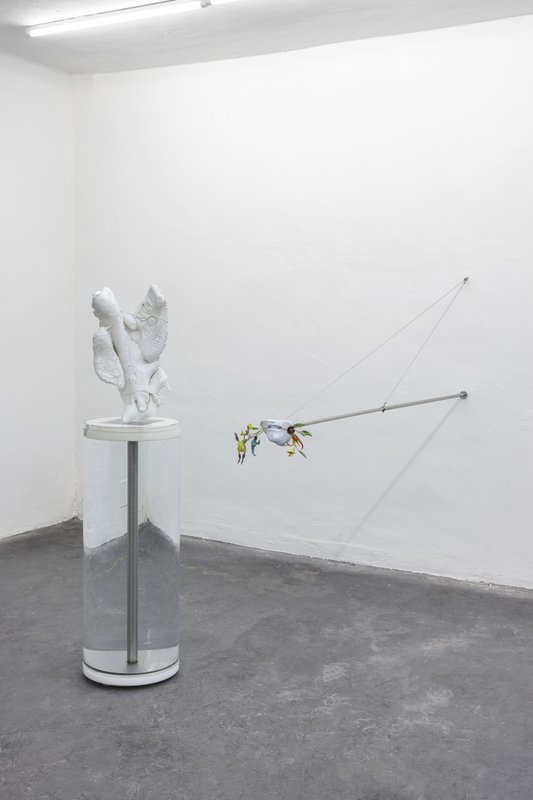 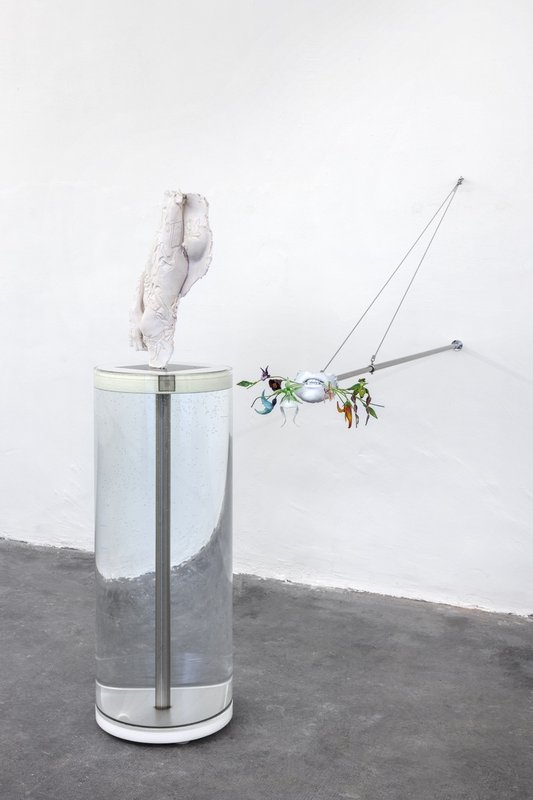 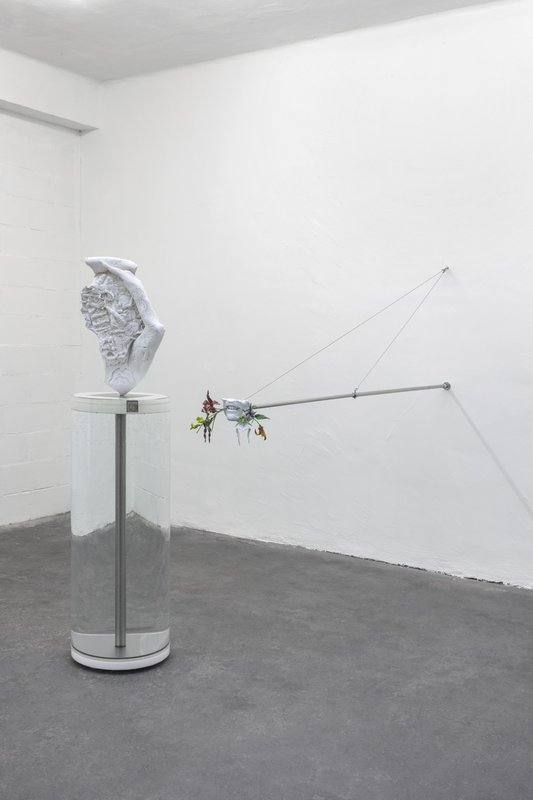 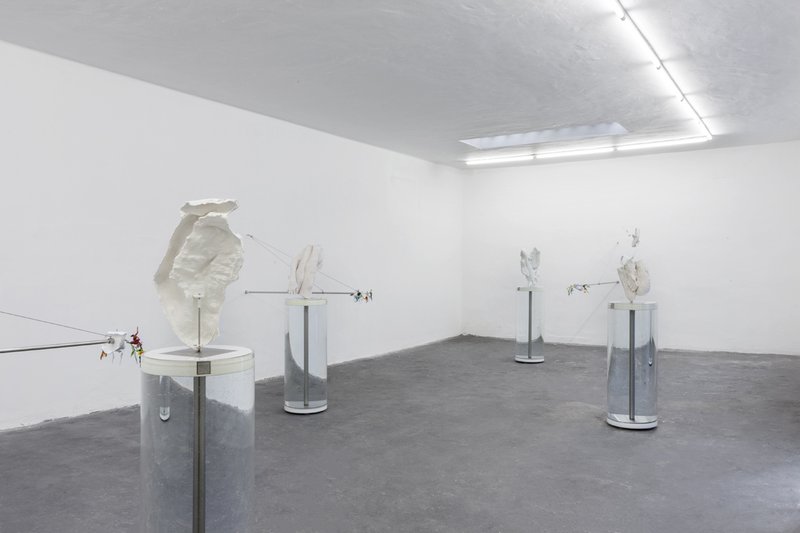 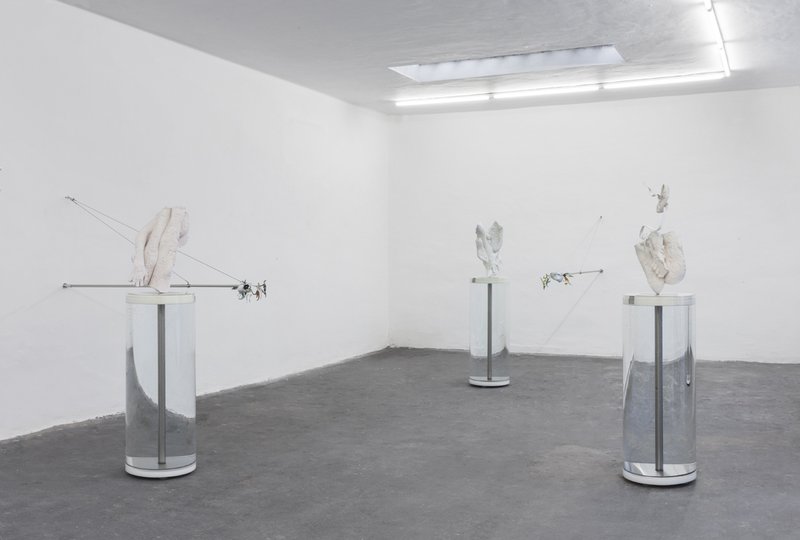 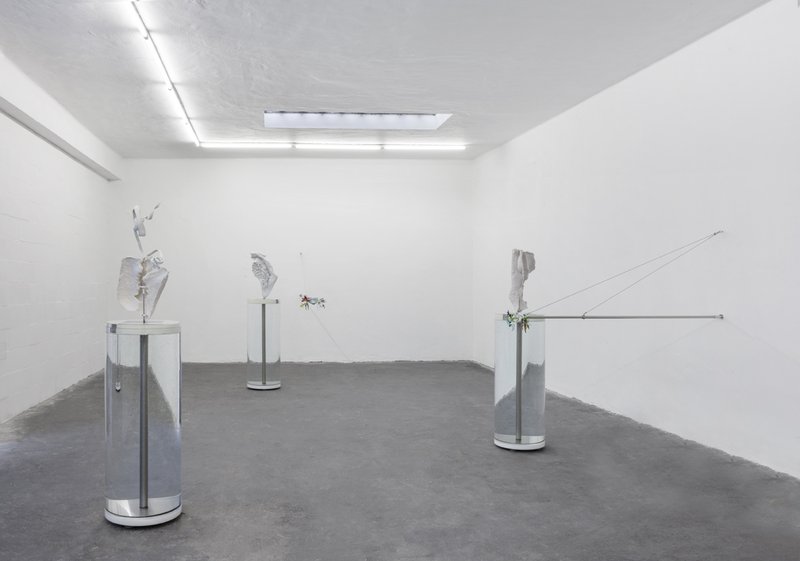 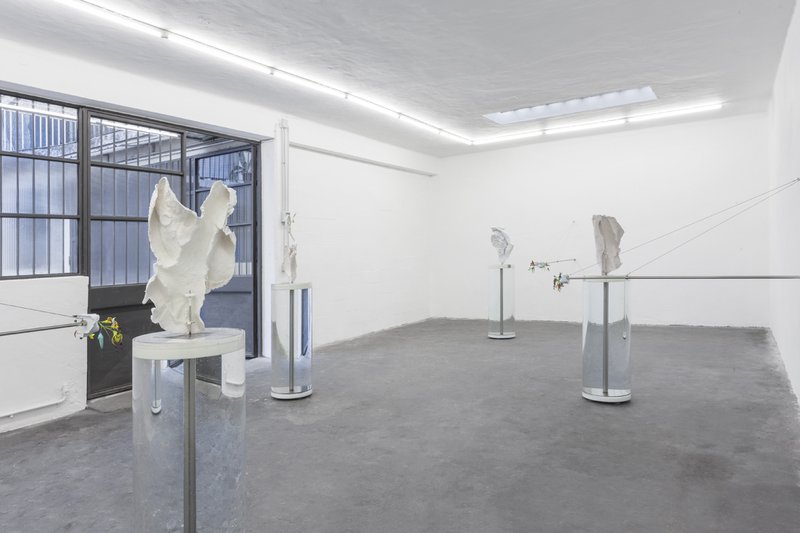 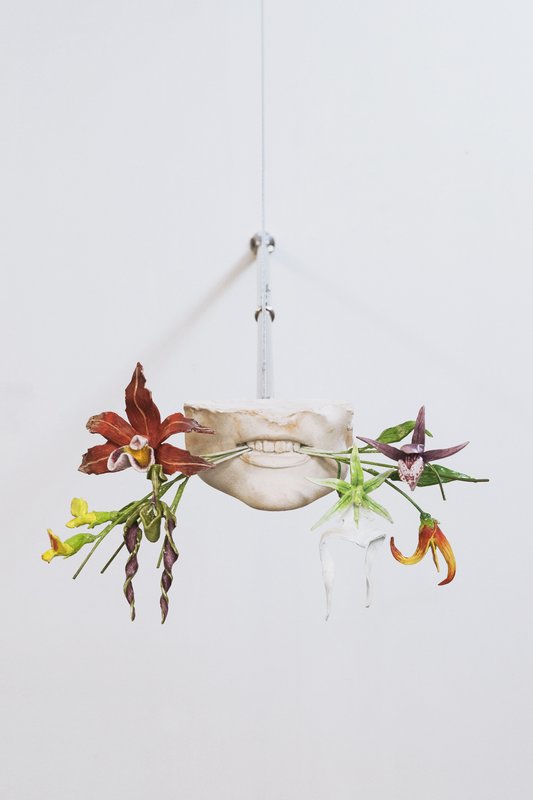 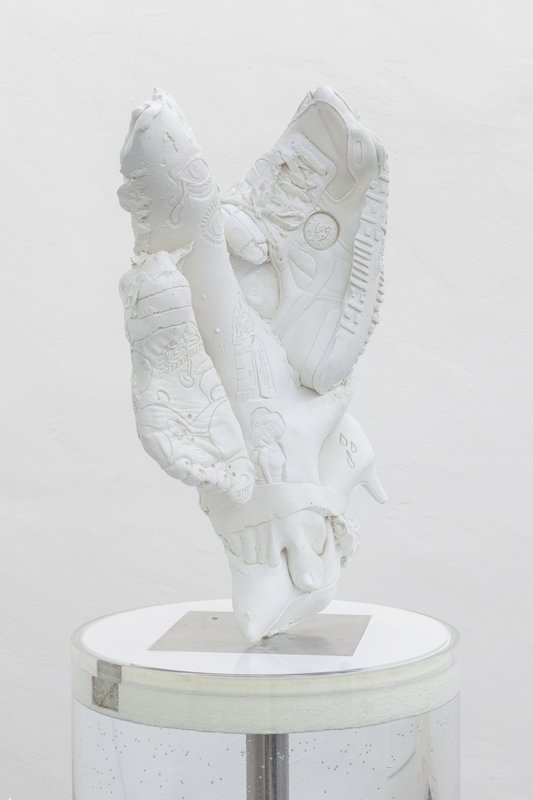 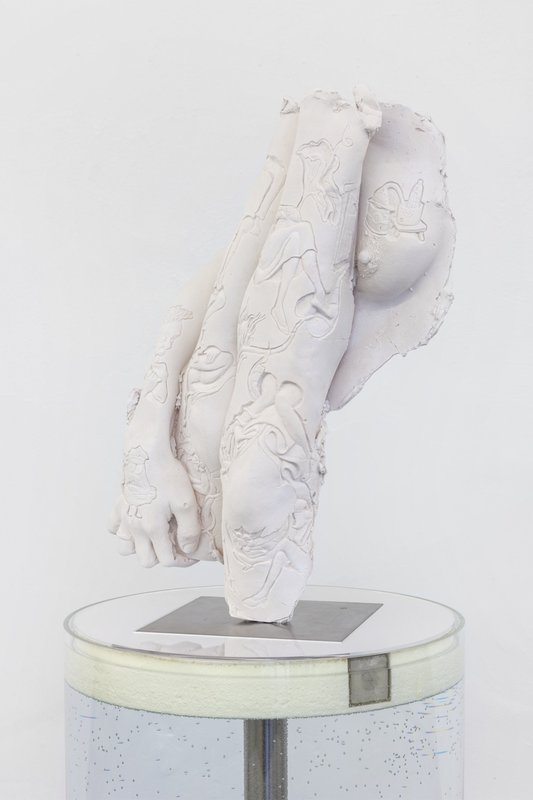 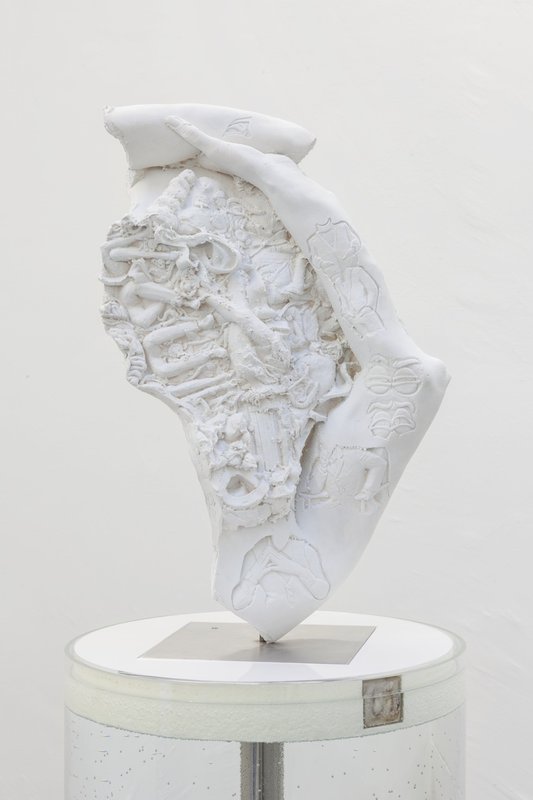 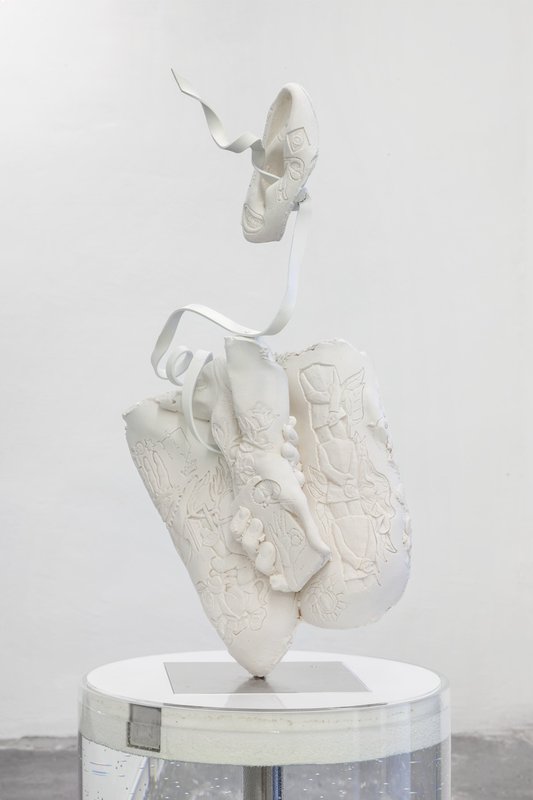 Giorgio Galotti is thrilled to present the first solo show by Anders Holen hosted by the gallery.

Images from the Undercurrent

It is a strange reassurance that the magnetic property of metals echo the magnetic field of the earth. In Agent, magnetism binds individual sculptures together in a relayed sort of relation; when a piece moves, it guides the movement of the others. The front and back of a sculpted surface moves off-center but always reorients itself to this given agency. They build a unity between them that is influenced by a much larger composition than what is immediately apparent. Like the tide or the waves of political affinity, the magnetic field guides our senses and serve as an anchoring concept to hold in place, secure and make stable our idea of what it means to belong. Co-habitation is, in part, a decision to agree to be governed by the same rules. An agreement that makes itself visible to us in the repeated use of a shared word-concept or image-concept, and in our acceptance of its validity and meaning.

Princess Jasmine and Mr.Potato Head have something unexpected in common: Sheltered and unaware of the world beyond the childhood home, they are both forced to confront the unknown as forces from the outside makes their way into their private spheres. Their responses to the readjustment that lies ahead of them however, stand in sharp contrast; as Jasmine’s first true encounter with an outsider, Aladdin provides the right kind of motivational force for her to make change happen. She feels fulfilled, feels love even. This is because of the incalculable, transformative experience of seeing oneself in the other. And the words “I can show you the world”. Mr. Potato Head on the other hand is unhappy. He struggles, he is angry. Change is nothing but a disturbance of life-as-usual. There is a strange irony to be found in that Mr. Potato Head is equipped with interchangeable limbs and features. He is in essence an emoticon made to teach emotional cues to infantile beings. In one memorable scene in Toy Story, we see him emulating what is to be recognised as a Picasso, with the hope of sharing this cultural reference with his friend, Hamm. Indifferently, Hamm says that he doesn’t get it, to which Mr. Potato Head responds “You uncultivated swine”. This to much comedic effect, since Hamm really is a toy pig.

In Agent, amongst a cluster of symbolic imagery, characters like these are found on the surface of a deformed shoe, a hand, a foot, a phone, an ear. They sit on the skin, like branded or carved into it, likening the sculpted surface to palpable flesh. The shoe, the hand, the foot, the phone, the ear, the mouth; a soft, imprintable matter that absorbs and keeps record of all that it has touched. By will or circumstance, or a will outside of itself. Through this familiarity I come to recognise the telling and retelling of lived experience in depictions of the gestural, symbolic and immaterial. But abstraction is, as we soon learn, a complicated affair filled with incalculable cause and effect. Trying to make sense of what this could mean, I look to If I told Him: A Completed Portrait of Picasso by Gertrude Stein in search of answers. A passage looks like this:

A plant lives, it bears beautiful flowers and it dies. The others like it also die. The species of plant dies out, because of deforestation perhaps. Before it died, a herbalist, or a tourist, or a girl living in the neighbourhood, or all or neither, took a picture or made a drawing of it. The photo or drawing finds its way to the internet and is stored in a database somewhere in the USA. Even if, or precisely because, it no longer lives in this world, a cast is made and painted to resemble it. Yet it is not it, nor does it attempt to be it. It just resembles it. Like an object by proxy - a deputy. Withstanding the constant gnawing and carving onto a surface. Impression, impressionable, impressed. Just that mark. This mark, an imprint. It’s specificity preserved, pressed, possessed. And so shared. Therefore shared. Again.

The deformation inherent to both word- and image-language is, perhaps unexpectedly, not emphasised here by deconstructing the symbol. Rather, it is seen through a near cybernetic deconstruction and recomposition of the material itself. When Holen shows us a human body, it is not a body, any body, anybody. No, it is this body or that body. It is a fleshy, imperfect and mortal thing, recorded by a detailed and particular cast. Even in its representation, it is not a stereotype. This mouth, not just anymouth – Your mouth, not the mouth.

The icon is as insufficient as it is repeatable, and the more it is shared the more insufficient it seems to become. Why does Mr. Potato Head struggle? He could very well be a troll in the making. But not only the mushy marshes of the web can tell you that understanding is a listening game. In situations of cohabitation, distortion of meaning is an inherent part of communication – inescapably. In a special kind of repeatable uniqueness, there is still a chance that the message can reach someone who accepts its deformed state, and tries to get it regardless.