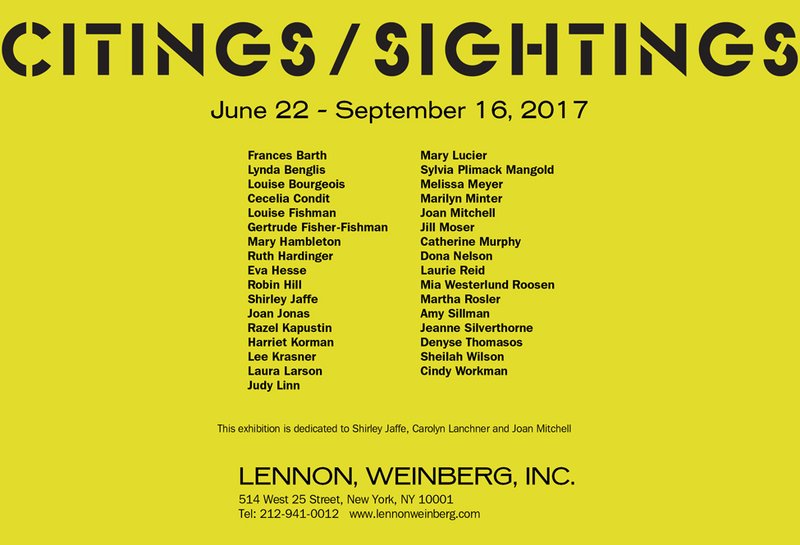 This exhibition was conceived by Jill Moser, and was organized in collaboration with Melissa Meyer. Both have long-standing relationships with gallerist Jill Weinberg Adams, and have had numerous solo shows at Lennon, Weinberg. The gallery opened in Soho in 1988, and for nearly three decades has been stalwart in support of an evolving roster of artists that includes many women, working in a wide range of mediums including painting, video, photography, sculpture, installation and printmaking.

Moser and Meyer reached out to the women artists who either are currently or were formerly represented by the gallery, a group who Moser recognized as

A kind of ‘accidental community’ that provided an opportunity to explore a question. What are the lines of influence and affinities among women artists, lines that cross time, place and medium? We posed this project to each of the eleven artists by asking them to choose both a woman artist who was an early influence and another with whom they feel a current affinity.

This self-curated show is the outcome of a sort of natural experiment to explore the shape of these connections. The results convey a virtual community of influence that is reflected in the contour of the show. It documents the distinct ways that individual women artists have informed one another.

Citings/Sightings is dedicated to three women who were personally important to the organizers and exhibitor, and represent a supportive community unto themselves:

To Carolyn Lanchner, an exceptional, ground-breaking curator in the Department of Painting and Sculpture at the Museum of Modern Art from 1967 to 1998. To Shirley Jaffe, an American artist who was a good friend of Carolyn’s, worked with remarkable independence in Paris most of her life, and was a dedicated mentor to younger French and American artists. And to Joan Mitchell, who also moved to France in the 1950s, was a friend of Shirley’s and had a significant early and ongoing influence on Jill Weinberg Adams. Mitchell was represented in New York in the 1970s and 80s by the Xavier Fourcade Gallery, and was a role model for Jill, a fledgling art dealer just beginning to discern the challenges and celebrate the accomplishments of women in the art world as she launched her gallery career there forty years ago.

We would like to thank the artists for their participation in the exhibition, as well as the galleries and organizations that facilitated the availability of the included works: Cheim and Read, The Louise Bourgeois Trust, David Schweitzer Contemporary, Gavin Brown’s Enterprise, Electronic Arts Intermix, Paul Kasmin Gallery, Alexander and Bonin, Salon 94, Peter Freeman, Mitchell-Innes and Nash, Gladstone Gallery, and Marc Strauss.

For additional information, please contact David Simantov at 212-941-0012 or david@lennonweinberg.com