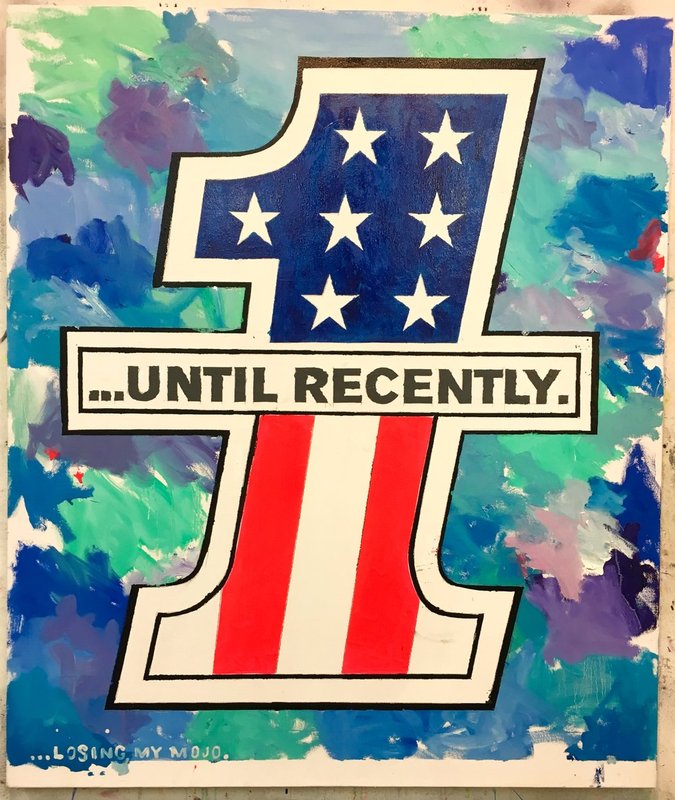 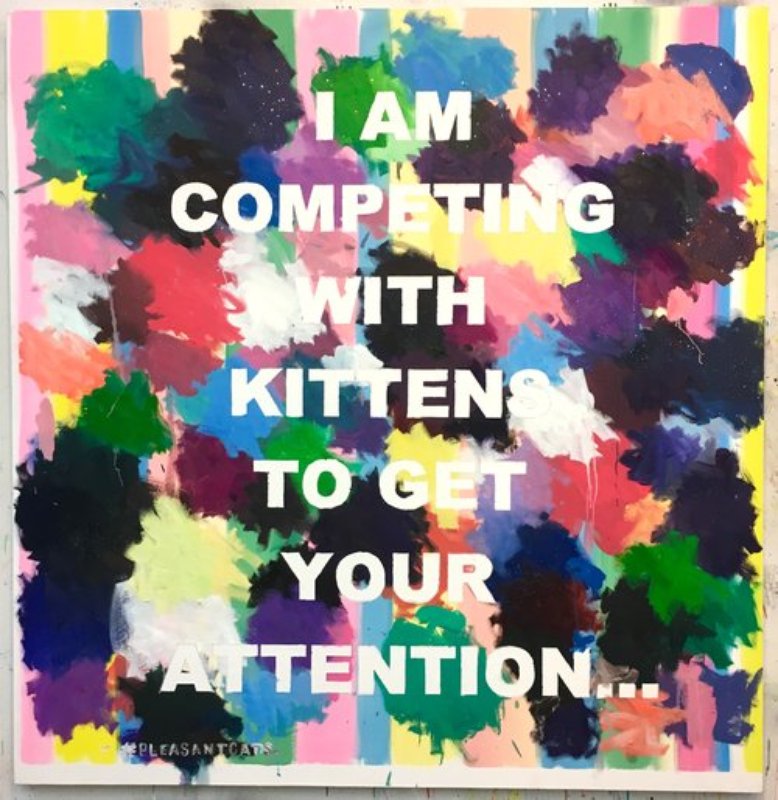 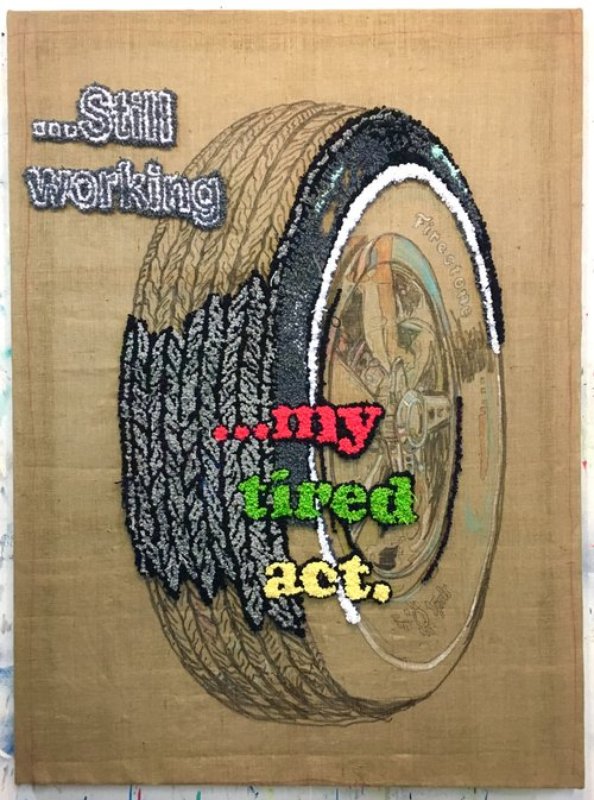 Front Room Gallery is proud to present “Tired Jokes,” new works by David Kramer. In his latest body of work Kramer tackles inequity and disaffection using biting humor and satirical wit. “Tired Jokes” is anything but tired. While Kramer’s style may often borrow heavily from bygone eras, in this show Kramer turns the lens of his “Americana” onto America itself. Unbounded by medium “Tired Jokes” is a multifaceted sculptural installation featuring paintings, drawings, video and the occasional hooked rug. In the past Kramer has been a character himself in his works often featuring third person one-liners and double-entendres. For this exhibition, much of this work is in the first person, with Kramer and us, as a nation, sitting in the same life raft, looking back at the situation in which we are (lamentably) drifting.

From the window of the gallery, guests are confronted with Kramer’s 2019 sculpture, Tire Joke, made out of discarded tires, spray-painted to resemble an American Flag. Perhaps a cringe-worthy roadside monument created out in Trump Ville, upon entering the gallery and viewing the profanity on the back, the text delivers the message and the punch line that the narcissism of our country has ended all possibility of reason. The jokes continue with Mojo, 2019, a canvas that uses a familiar trope of Americana, a red white and blue No.1, only to have its punch line, “Until Recently,” draped across its surface.

#Pleasantcats 2019 is an abstract painting with a message about both the artist’s desire to be relevant in these trying times, and also serves as a reminder of the deep dive we all take into social media instead of looking at the world right before our eyes. Richter Joke 2018 is an art world joke, as written on the bottom left hand corner, while simultaneously a joke about class and the desire of those with power and money to be attracted to the things most easily digested. THE RICH KEEP GETTER RICHTER is written across an acidy painting of a fascist. To top this off Kramer writes, “Everybody knows.” This is an indication of the collective agreement of what is best, if only because it is what we are used too. In Kramer’s video, Welcome to Paradise.” 2019, Kramer shoots a studio visit to his Williamsburg studio, while the whole block seems to be under construction as a foreshadowing that with the high value of real estate, his life as he knows it, is probably soon to be a thing of the past. The Avalanches song, Since I Left You, serves as a soundtrack to the soon demise. The video starts off with another Kramer joke: “…When I first moved to Brooklyn back in the 1980’s and asked people to come to my studio, they would always tell me, ‘I don’t go to Brooklyn.’” “…Now when I tell people that my studio is in Williamsburg, they always say, ‘Williamsburg? Nobody has a studio in Williamsburg.’” Tired Jokes are sometimes still worth repeating.

Front Room first became involved with David Kramer in 2004, when we featured him in the exhibition “Sellout” at Voorkamer gallery in Lier, Belgium (which coincidentally means “Front Room in Dutch). He has exhibited internationally. His work is in the collection of the Pompidou Museum and Museum London, Ontario, and he has screened his videos and performed at the Whitney Museum of American Art and The Brooklyn Museum of Art, Pompidou Museum, and many other institutions and galleries.