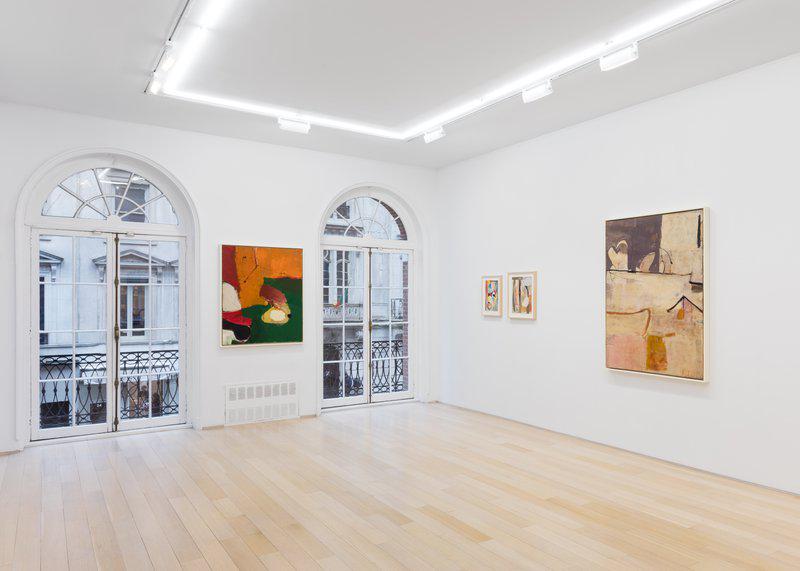 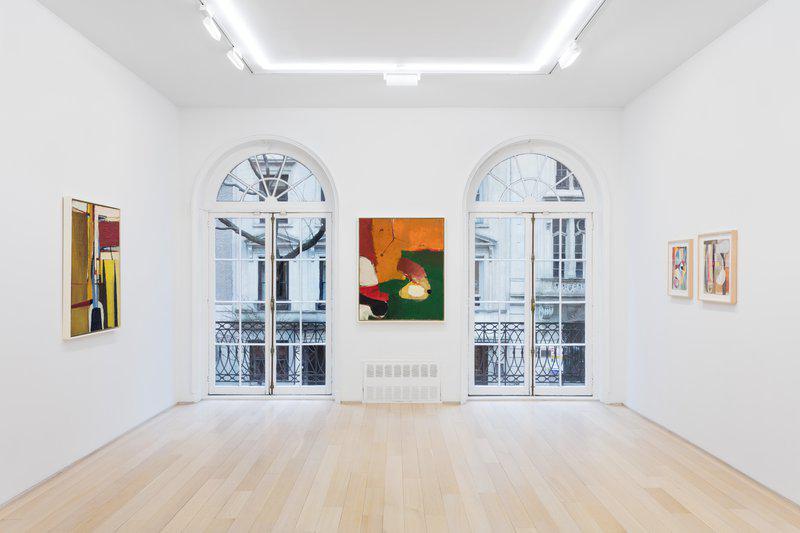 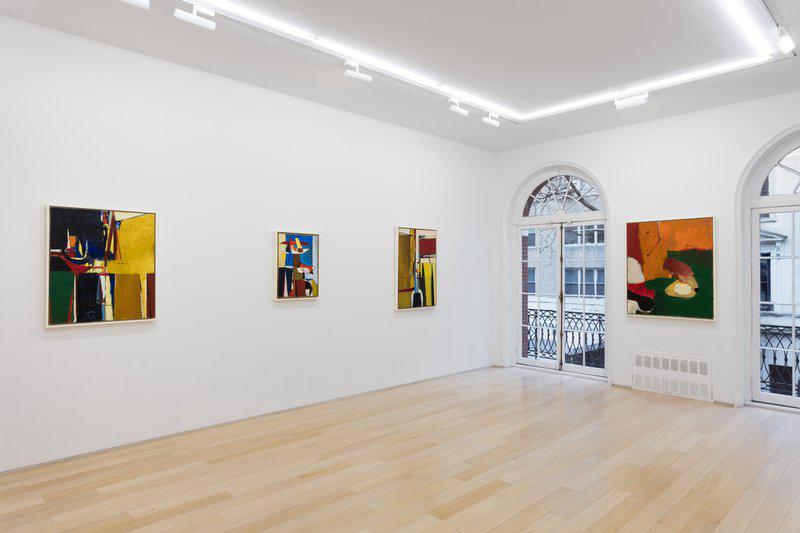 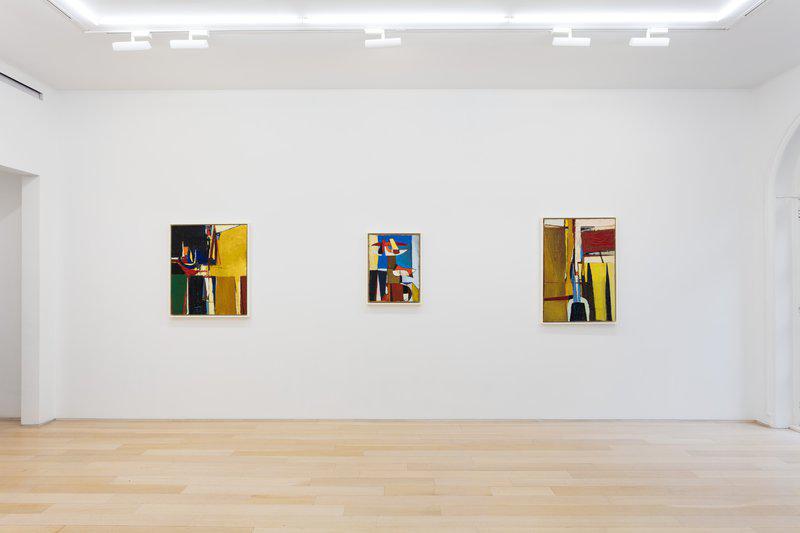 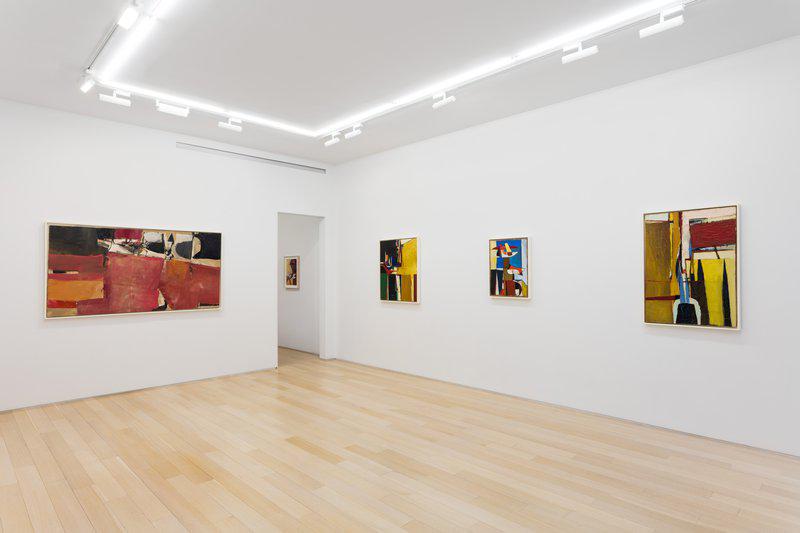 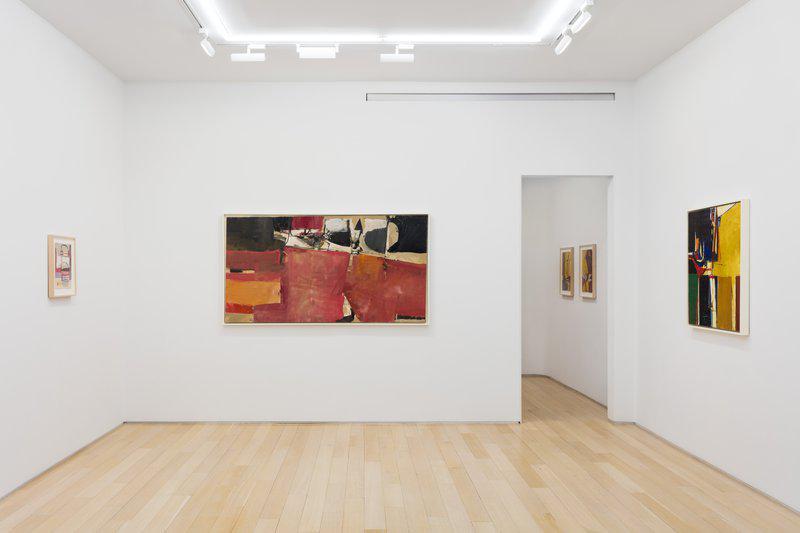 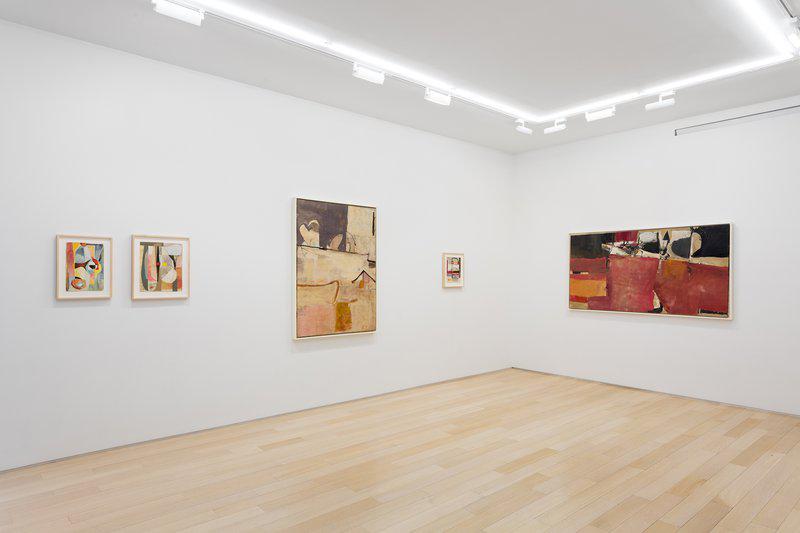 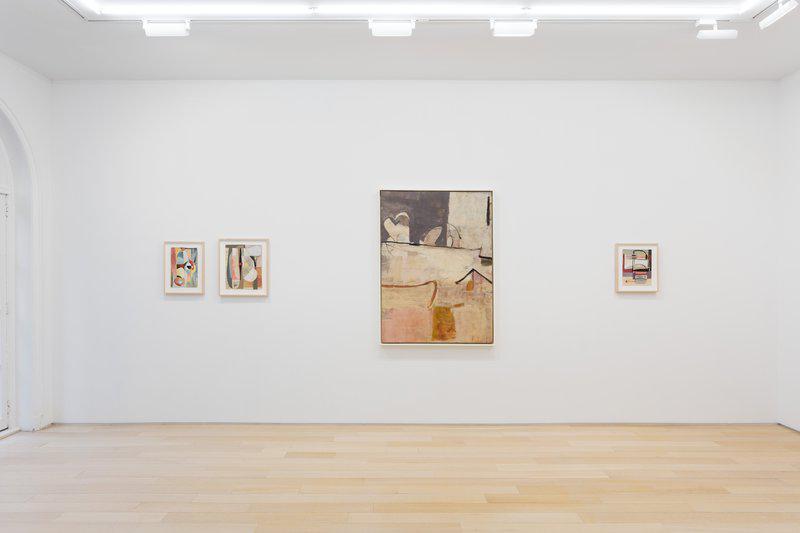 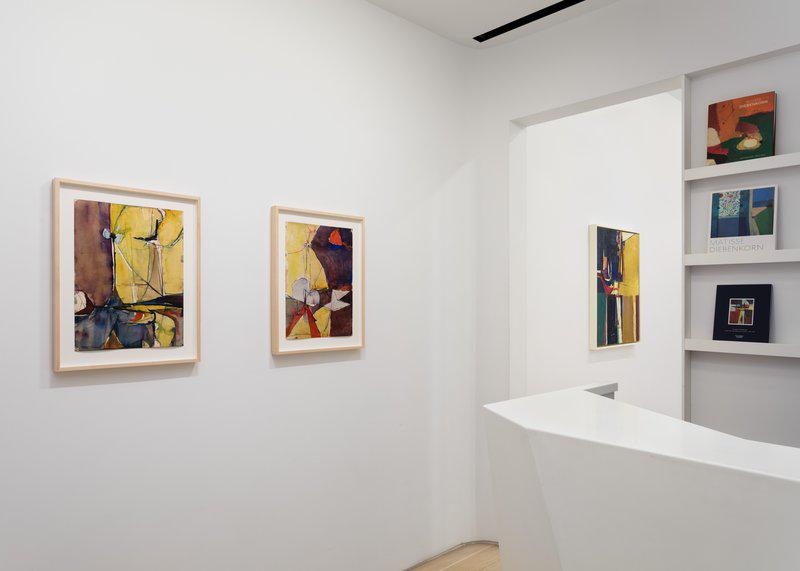 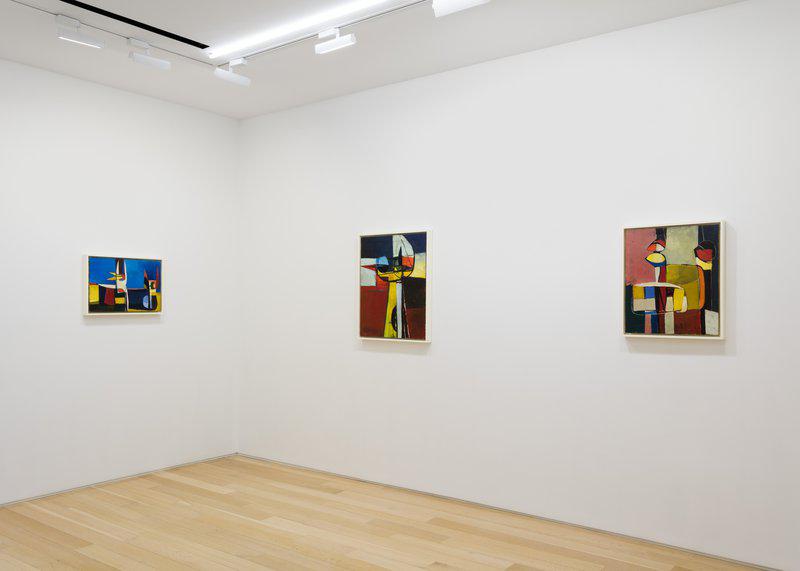 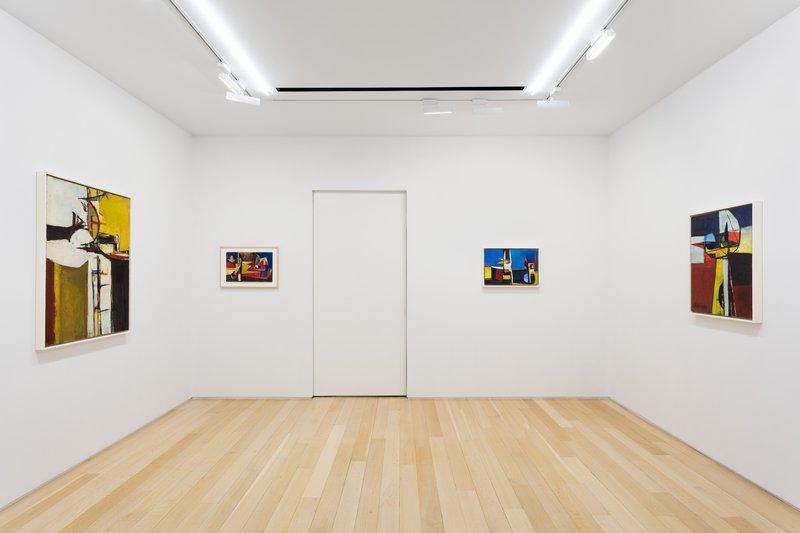 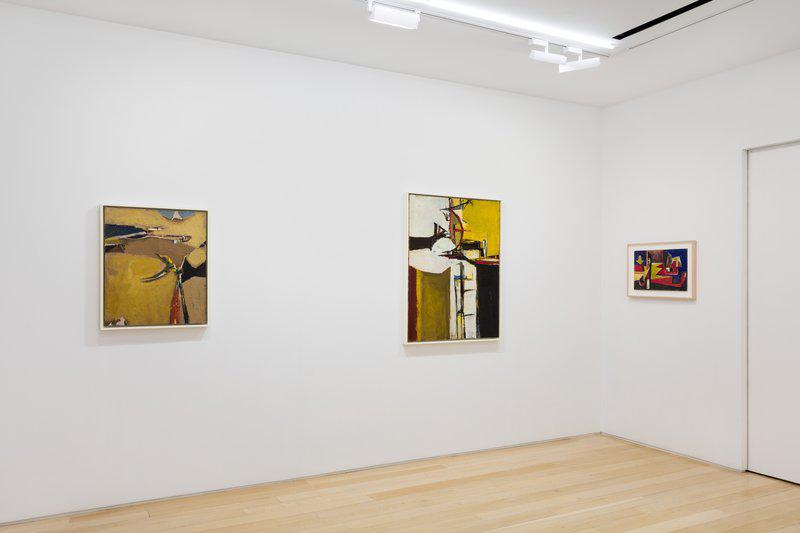 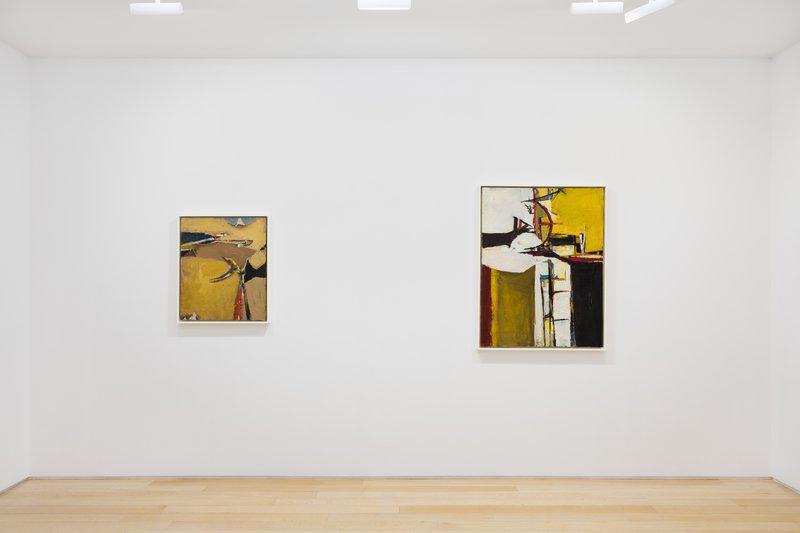 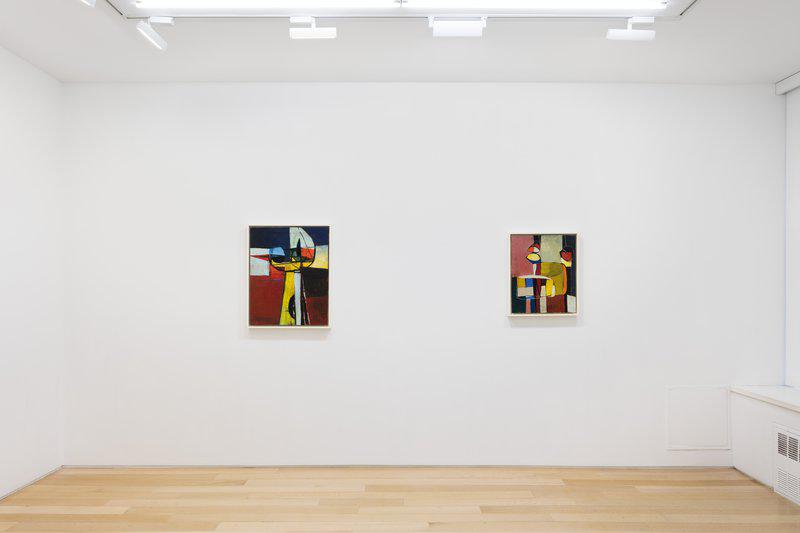 “A successful painting has to have something of you and your experience within it.”
—Richard Diebenkorn

Van Doren Waxter is very pleased to announce Richard Diebenkorn: Paintings and Works on Paper 1946-1952, an exhibition of rarely seen early paintings and drawings made by the distinguished American painter, draftsman, and printmaker on view at 23 East 73rd Street. The artist has been represented exclusively by the gallery since 1999, and this historical exhibition at its 1907 townhouse devoted to the artist’s stylistic and technical origins in oil, watercolor, gouache, ink, crayon, and collage includes work that has never been shown in the northeastern United States but which was recently exhibited in Richard Diebenkorn: Beginnings, 1942–1955 (2017-2019), organized by the Richard Diebenkorn Foundation in conjunction with the Crocker Art Museum in Sacramento, CA. The presentation is accompanied by an illustrated exhibition catalogue containing a scholarly text adapted from the Beginnings essay by Crocker Art Museum Associate Director and Chief Curator Scott A. Shields, who asserts that Richard Diebenkorn is “the greatest artist California has yet produced.”

A young Richard Diebenkorn was influenced by his teachers and mentors, such as the painter David Park, as well as by artists such as Arshile Gorky, Joan Miró, and William Baziotes. The works on view evidence the artist’s journey of self-discovery. Oil paintings produced in Sausalito, California during the late 1940s with their dark, angular forms, invoke both Surrealism and the fractured planes of Cubism. Untitled (c. 1947) and Untitled (c. 1948), both reveal stylizations that were on view in the artist’s first museum exhibition at the age of 26, Paintings by Richard Diebenkorn (1948) at the California Palace of the Legion of Honor in San Francisco. In the essay adapted exclusively for the gallery presentation, Shields remarks that the artist made these works feel alive by avoiding “the natural grace of his line and brushwork, and his easily balanced compositions” and instead used his brush “to scrub on pigment that at times looked messy or retained chunky deposits.”

During this time, the artist, “whose evolution was extraordinarily rapid,” Shields enthuses, experimented with inexpensive materials such as watercolor, crayon, and collage in a small scale which granted Diebenkorn the luxury, the artist said, of “a kind of tryout or rehearsal of general possibilities.” Untitled (c. 1946) is a bright and luminous pasted paper, construction paper, and pasted cardboard work of overlapping forms and a single floating yellow orb. A highly appealing and unusual work for the artist, its buoyant pink palette is an exception to the predominate works in the exhibition that illustrate as Shields posits, the artist’s battle against “the refined, gracious, and elegant.”

Affecting works made in the early 1950s, of “discordant hues… seemingly random forms and energetically meandering lines,” according to Shields, were produced during the artist’s Albuquerque and Urbana periods and before his switch to figuration. A 1952 oil on canvas is a significantly scaled horizontal work measuring nearly four feet across consisting of reds and blacks and repeating edge to edge forms recalling the mesas of western New Mexico. A year prior, Diebenkorn took his first commercial airplane flight, traveling from New Mexico to San Francisco, which left the young artist “absolutely knocked out and thrilled, really taken,” as he enthused in a conversation at the time with Gerald Nordland, the late art historian and curator. Untitled (Albuquerque), an oil made in 1951 and measuring 56 ½ x 41 ½ inches, is characterized by calligraphic forms, cut-out shapes, and “edifying layers…visible revisions” that Shields asserts would become a signature part of his subsequent and acclaimed epic Ocean Park works.

Richard Diebenkorn: Paintings and Works on Paper 1946-1952 will be accompanied by a special presentation of the artist’s “wartime” work loaned by Richard Diebenkorn Foundation. These representational drawings were made during the artist’s military service from 1943 to 1945, a period when he produced sketches and watercolors of soldiers. “It was a happy yet terrifying time,” Shields writes, “as Diebenkorn knew he was to be sent behind enemy lines”—the artist was honorably discharged after the surrender of Japan. A moody 1945 work features its subject rendered in dense, rich ink atop a bright sheet; in another, a young Diebenkorn gazes downward in a graphite on paper (1943) self-portrait striking for its direct likeness and immediacy.

About the artist:
Richard Diebenkorn was born in Portland, Oregon in 1922. He attended Stanford University from 1940 to 1943 and was awarded his Bachelor of Arts in 1949. He studied at the University of California, Berkeley in 1943 and attended California School of Fine Arts in 1946. He received his Master of Arts from the University of New Mexico, Albuquerque in 1951. The artist’s earliest abstractions were made while the artist lived in Sausalito, California (1946–1949), Albuquerque (1950–1952) and Urbana, Illinois (1952–1953). In 1953 he moved to Berkeley, continuing his work in abstraction. The year 1955 marks the beginning of a period of more than a decade that the artist worked from direct observation making figurative works from a model, along with still lifes, landscapes, and interiors. From 1966 to 1988 he lived in Santa Monica, taught at the University of California, Los Angeles from 1966 to 1973, and began his Ocean Park cycle in 1967. He moved to Healdsburg, California in 1988 where he worked exclusively on drawings and prints until his death in 1993.

In 2016, the artist was the subject of Richard Diebenkorn: The Catalogue Raisonné (Yale University Press), the definitive resource of the artist’s sketches; drawings; paintings on paper, board, canvas; and sculptural objects.