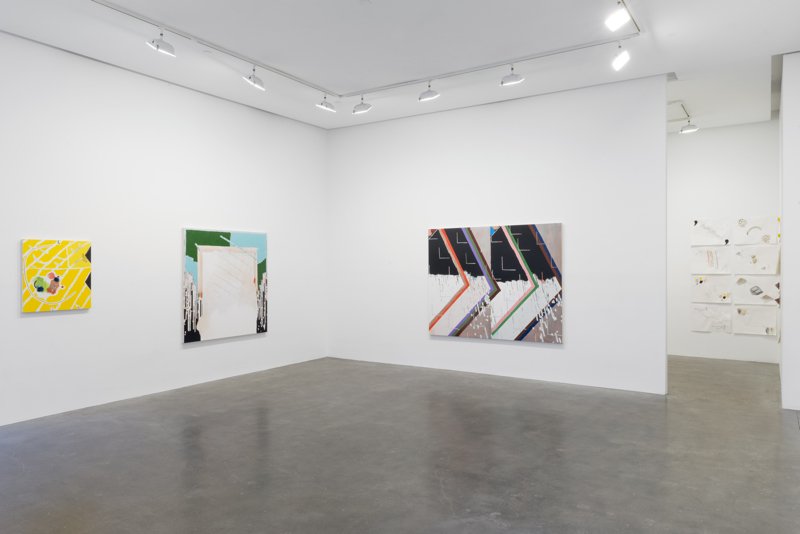 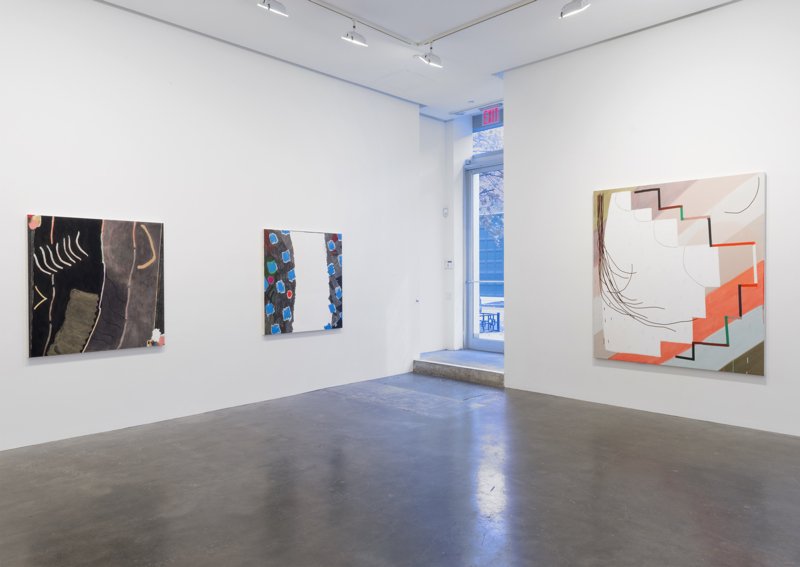 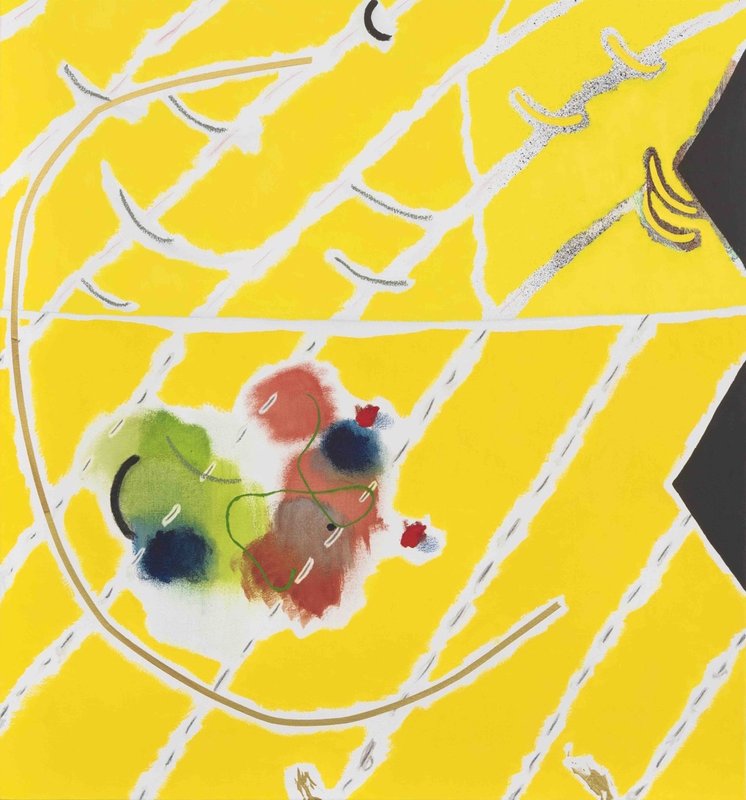 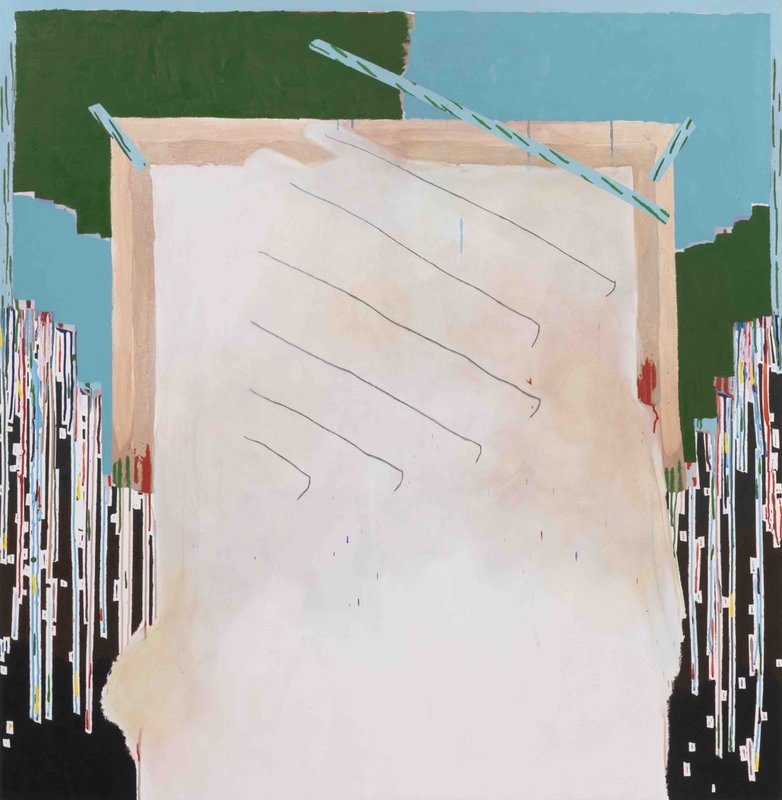 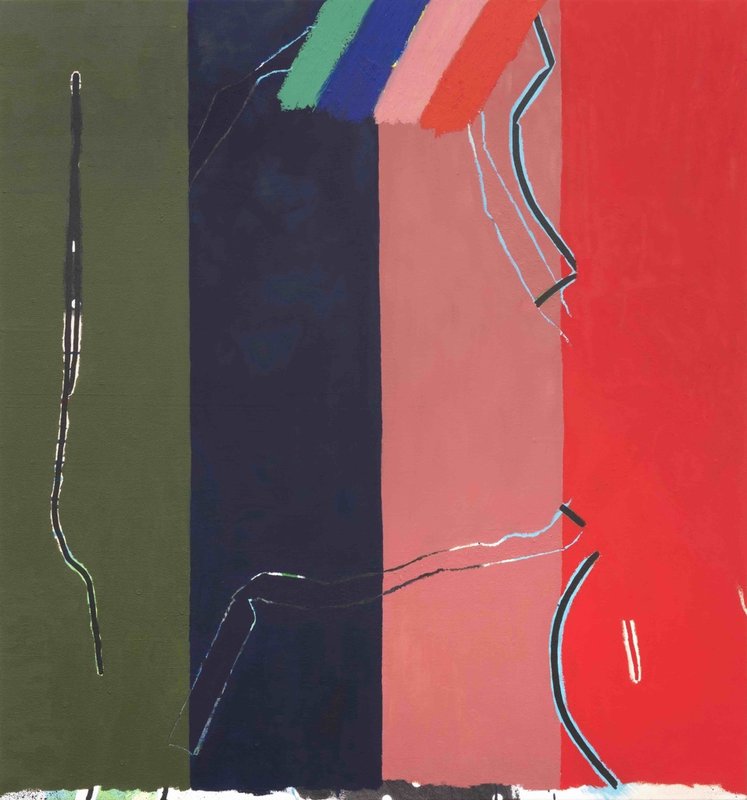 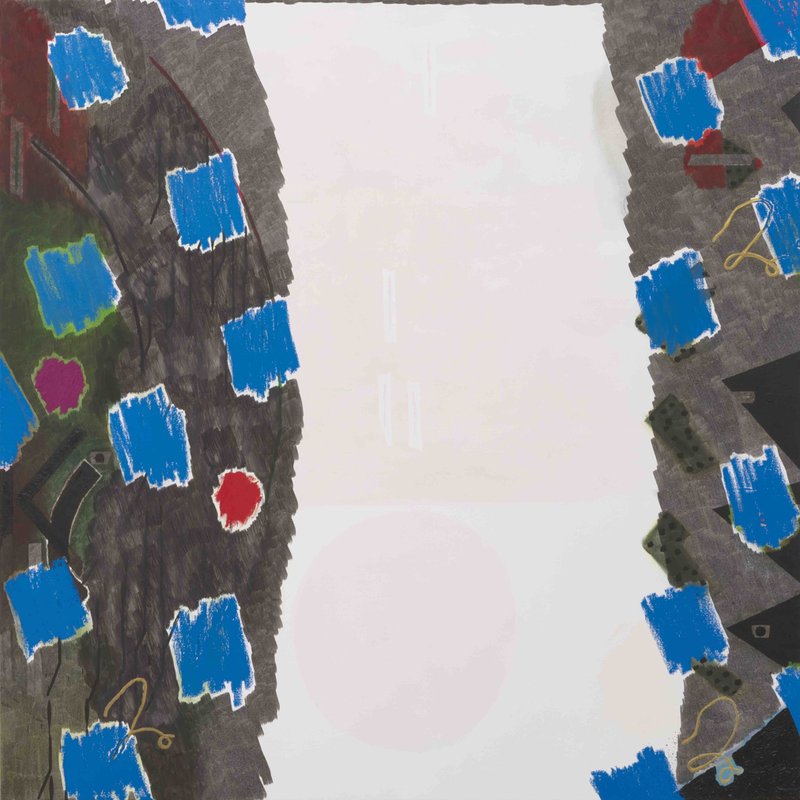 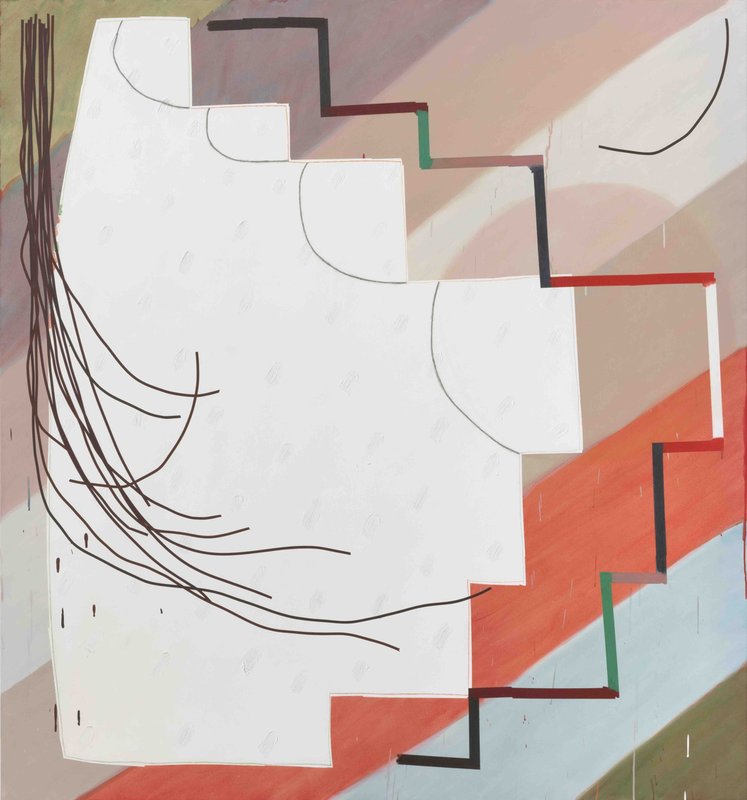 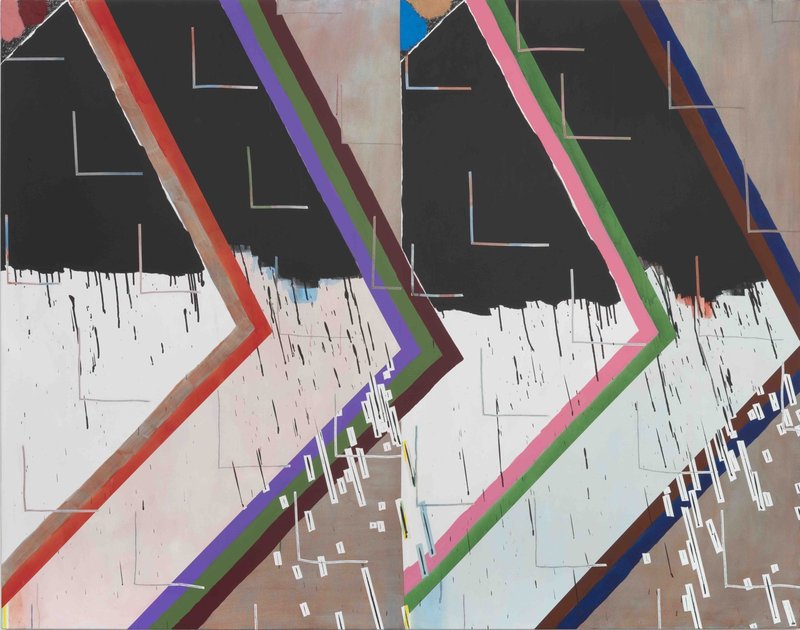 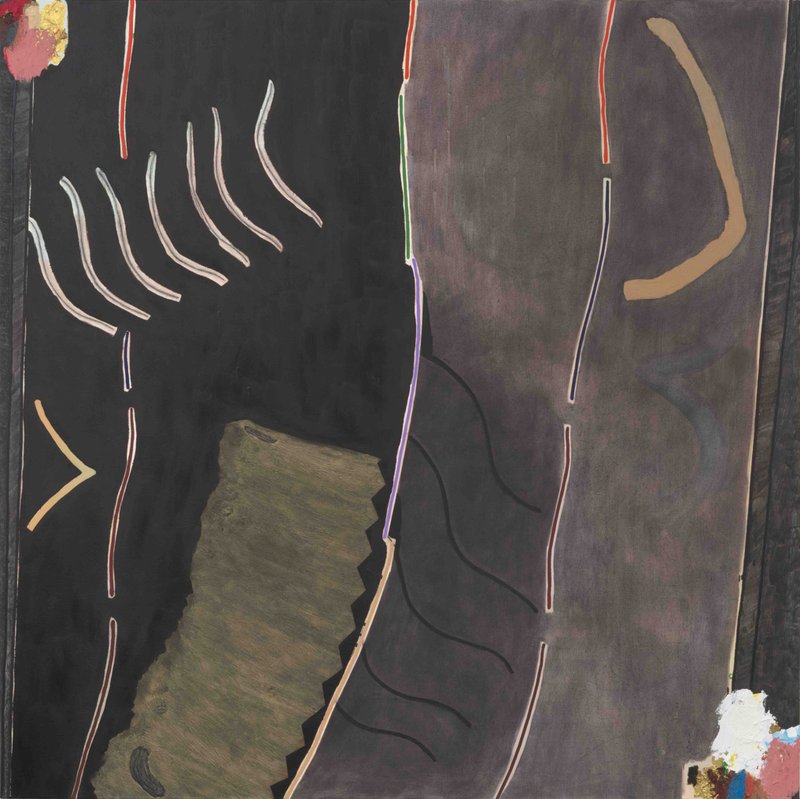 Susan Inglett Gallery is pleased to present Speeds, an exhibition of new paintings and works on paper by Los Angeles based artist Allison Miller in her third solo exhibition with the gallery, on view from 10 December 2015 to 30 January 2016. A reception for the artist will be held Thursday evening 10 December from 6 to 8 PM.

when repetition clicks over and becomes pattern.

when the decorative function of mark becomes structural scaffolding.

when pattern pathologically finds itself in the process of falling apart or coming together.

when systems take hold just to be broken.

when exercising permission to break “rules” (a permission of which I need frequent reminding) suddenly produces recognition of the system that was subliminal or psychically suppressed up to that point.

when right-angle arrows point in the same direction but it turns out they are actually sideways and upside-down carrots trying to interrupt the flow of picture-plane conversation with witticisms and asides about how totally scripted reality is.

when stilted line is the site of silent deviant struggle, laid down so self-consciously, leaking doubt.

when dotted line is simultaneously perforation and stutter, speed and stitched seam—indicating short bursts of energy slipping in and out of composure, tearing through control, pulsing like an animation.

when a tapered stack of slant lines are punctuated by a comma at the break and they become textual.

when paintings are road signs, signaling construction ahead.

when one, two, three, four-lane blacktops pave over the wilderness.

when doubling is about the hilarity and horror of seeing oneself, owning a mirror, loving it best when fogged up.

when doubling betrays its axis of reflection, which determines orientation.

when doubling is about more than one and especially multiples of two.

when coupling is as much about mitosal splitting in two as it is about call and response, dialogue, cooperation, echo, sounding board, and companionship.

when striping as a strategy comes up short, sputters out before the edge of things.

when edges are made major for their last-chance power of resistance and insistence on misfits, marginalia, and the growth of the thing seen in medias res.

when the play of surfaces includes a ripping of pictorial epidermis to reveal a glimpse of past attempts, internal and repressed content, evidence of what is below.

when each drip, each colorful rivulet is archived and highlighted in white, like at a flash-bulb crime scene.

when smudges, smears, splotches, and sores are landmarks around which a map is made.

when focus softens and falls off, sleepy and happily sauced.

when space is a matter of lenses and degrees of clarity and sharpness, fogginess and warmth.

when different types of space get layered and stacked in ways that do not add up.

when line is tape and redaction, thick and crisp and stern.

when line is strip and block and pixelated drip, delivered en masse like rain sheeting at an angle.

when the same form or idea (like raining paint drips or a subtle soft pink circle) pops up on opposite sides of the room on different canvases and contexts, raising questions like is there narrative relation between them and what is it.

when we track and analyze stroke, shape, and sheen like scat on a hunt.

when the act of looking tunnels through and runs up against multiple arches, which are also frames and bandaged bodies; curtain, proscenium and headband.

when a picture wears paint like a mask and opacity is flaunted as erasure.

when paintings operate as after-image and contrast pushes optical buttons to mess and muss and scramble vision.

when a gaping white emptiness surrounded by encroaching black and blue turns out, upon further inspection, to be anything but empty or white.

when opposite extremes sit together in conversation and the high volume of one hides the whisper of the other and you’re glad once again that you took the time to learn to read lips way back when.

Allison Miller has shown extensively with work appearing most recently at GAVLAK, Los Angeles and in the Pizzuti Collection's Now-ism: Abstraction Today, Columbus, Ohio. Earlier presentations include "...six memos for the next," curated by Tilo Schulz and Jorge van den Berg, Bregenzer Kunstverein, Austria; "Painting in Place," curated by Shamim Momin and LAND, Los Angeles; "Stone Gravy," curated by David Pagel, Ameringer/McEnery/Yohe; "Made in L.A. 2012," organized by the Hammer Museum, Los Angeles; the Santa Barbara Museum of Art; ACME., Los Angeles; the Art Gallery of Calgary, Canada; the Las Vegas Museum of Art and the Orange County Museum of Art.

The exhibition will be on view at the gallery located at 522 West 24 Street Tuesday to Saturday 10 AM to 6 PM. The gallery will be closed 20 December 2015 through 4 January 2016. For additional information please contact Susan Inglett Gallery at 212 647 9111 or info@inglettgallery.com