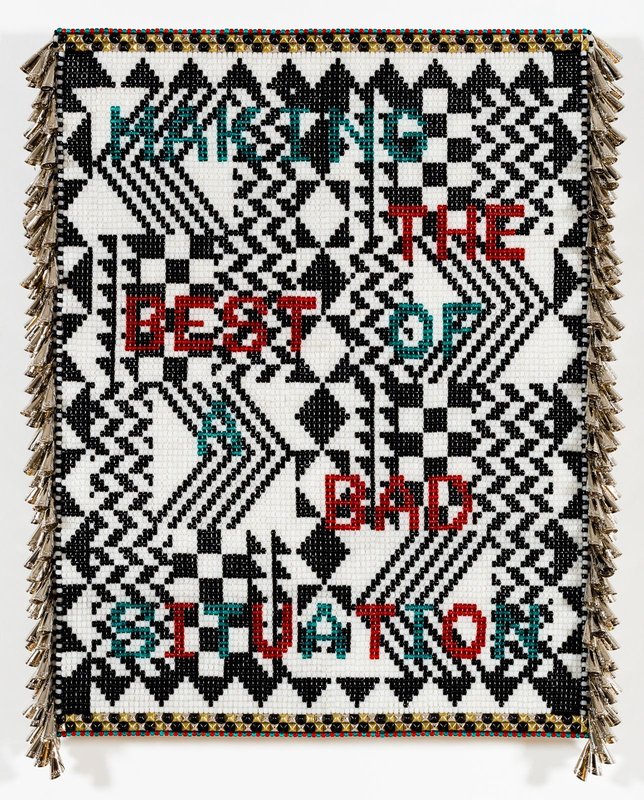 Lehmann Maupin is pleased to present TILL, LIT, Nari Ward’s fourth solo exhibition with the gallery. Ward will debut a series of new work comprised of mixed media paintings, sculptures, and installations. These works examine the ways value is assigned throughout society, with Ward attempting to disrupt existing monetary-based value structures in favor of social enrichment. On the occasion of this exhibition, Ward and Lehmann Maupin will donate a percentage of sales to Housing Works, the New York City-based nonprofit organization whose mission is to end the dual crisis of homelessness and AIDS.

Ward garnered acclaim early in his career with pieces like Amazing Grace (1993), which he produced while in residence at the Studio Museum in Harlem. Ward created a sculptural installation using hundreds of discarded strollers and recycled fire hoses woven to resemble a ship’s hull as a reference to both the history of the transatlantic slave trade and today’s homeless population. The methodologies implemented in this early work can be found throughout his career, with the artist repurposing found objects and placing them in juxtapositions that highlight their functional purposes, cultural associations, and metaphorical potential. Ward lives and works in close proximity to his subject matter: He chooses media sourced from his local surroundings, delicately inserting his own experience in the work. He contributes to socio-political themes, including identity, race, religion, immigration, patriotism, tourism, and consumer culture, by imbuing his work with historic and personal narrative, while intentionally leaving obscured space for open-ended meaning.

The works in this exhibition are organized into two distinct material categories relating to the exhibition’s title; the paintings are collectively referred to as TILL, and sculpture and installation works as LIT. The TILL works directly reference commerce. Ward creates these seemingly minimal paintings out of cash register drawers, referred to as tills, surrounded by faint rectangular forms on a background of metallic colors associated with money—gold, copper, and silver. Other large-scale paintings in the series render the pyramid from the back of U.S. $1 bills as a focal point, where the bricks appear to be laid in a frenetic manner that suggests the structure is on the verge of toppling.

The size and shape of the rectangles that are repeated throughout the works recall a dollar bill. Indeed, Ward has extracted a thin margin from paper money, a segment so small its removal is undetectable to the naked eye, allowing the altered bills to remain legal tender. Ward gives the paintings a distinct patina by pouring and rubbing white rum in a ritualistic fashion that weathers and removes the pigments, producing an ethereal aura much like a color field painting. Ward treats the word “till” with double entendre in both noun and verb form, representing both a receptacle for capital, and allusion to the hidden or unacknowledged labor required in its acquisition.

In the LIT works, artificial lighting is employed to maximum effect. Ward utilizes the exact wattage of the generator-powered floodlights erected by the NYPD on street corners and parks to deter crime. The first piece viewers encounter is a replica of these lights, constructed from collected materials. This light beams across a series of panels that spell out “Reparations,” illuminating the longstanding debate that conflates both economic policy with spiritual atonement for America’s history of slavery and racial subjugation. In another installation, this harsh light flashes at intervals over the low light of candles typically used in street memorials that commemorate the location of a death in the neighborhood. In both pieces, Ward endeavors to bring the experience of living in a community surveilled by the police into the gallery, using everyday objects that create a tangible link to the reality of our current political and social climate.

In essence and action, TILL, LIT engages the value systems found in our relationship with currency, with the artist subverting this system to ultimately benefit those who have been undervalued and marginalized economically and socially. While politically minded, Ward is not an activist, but an alchemist, removing a small part of the transactional economy to add tangible value to the social transformation that takes place in art making.

Running concurrent with TILL, LIT in Chelsea, Socrates Sculpture Park in Queens will exhibit Nari Ward: G.O.A.T., again, through September 4, 2017, a series of newly commissioned outdoor artworks created on site by Ward, while a recent commission of his piece, We the People, is on view at the New-York Historical Society on the Upper West Side. His mid-career survey, Nari Ward: Sun Splashed, will be on view at The Institute of Contemporary Art/Boston, through September 4, 2017.

Housing Works is a vibrant, healing community of people living with and affected by HIV/AIDS. Our mission is to end the dual crises of homelessness and AIDS through relentless advocacy, the provision of lifesaving services, and entrepreneurial businesses that sustain our efforts. Housing Works is the largest grassroots AIDS organization in the U.S., as well as the largest minority-controlled AIDS organization.