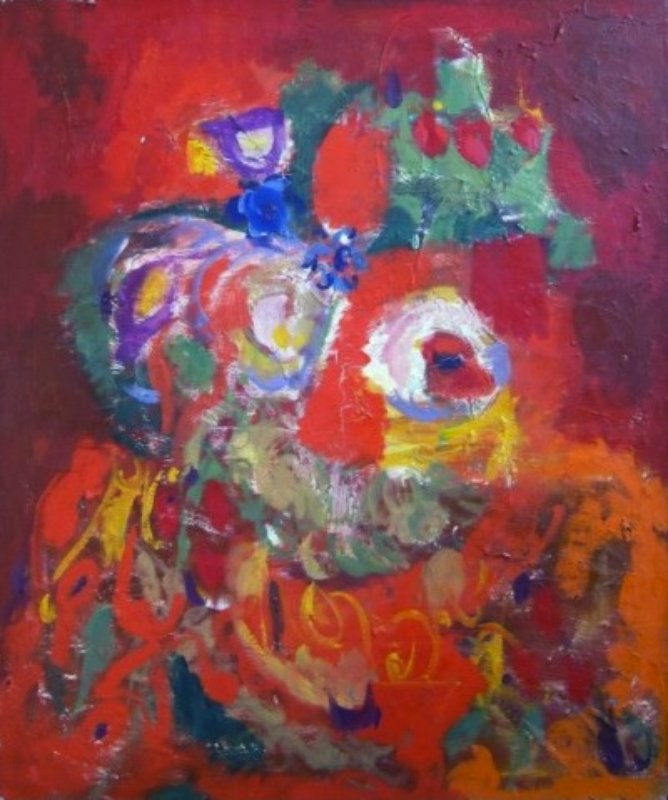 Before any exhibit on “Women” or “Older Artists” was on the horizon, the Anita Shapolsky Gallery celebrated them with the exhibition “Over 85 – Still Creating” (Amaranth Ehrenhalt, 88, Sonia Gechtoff, 89, and Liz Whitney Quisgard, 86) from December 10, 2015 through March 18, 2016.

Sadly, there were no reviews even though our gallery has been in existence since 1982 and we feature abstract artists of the ‘50s.

The Anita Shapolsky Gallery is pleased to present Women! Women! (of the ‘50’s),a comprehensive collection of works by women abstract expressionists who exhibited in the 1950’s. The fifteen women in this exhibition acted as pioneers in their field, each of them carving a unique space in a male-dominated art world. The Anita Shapolsky Gallery has been exhibiting these artists since the ‘80’s. More than sixty years after the emergence of Abstract Expressionism, the art produced by these women remains relevant, modern, and highly individualized. Women! Women! is a celebration of these influential artists. The Gallery is proud and excited to devote a show entirely to showcasing their talents and innovations. Two of the artists in the exhibition, Ethel Schwabacher and Sonia Gechtoff, are currently featured at the Denver Art Museum as a part of its Women of Abstract Expressionism show, which will be traveling for two years. All of the women represented in the show are in major museum collections.

Gallery One will feature the work of Ethel Schwabacher, a New York artist who studied independently under Arshile Gorky. Her surrealist-inspired abstract paintings explore themes of nature, maternity, and psychology. Using a bold palette of complementary colors and loose brushstrokes, Schwabacher’s paintings are explorations of her own psyche. She drew her influences from Greek themes and myths, Freudian theories of dream states and the unconscious, as well as Surrealist canons. More than just a painter, Schwabacherchanneled her creativity through writing as well. In 1951, she wrote the catalog for the Whitney Museum’s memorial exhibition for Arshile Gorky, and in 1957 she published the first comprehensive monograph on the artist, which included a biography and her personal critiques. She also published various writings on her own paintings in which she elaborated on her process and motivations.

Gallery Two will display the works of fourteen female abstract expressionists, whose artwork ranges from painting to sculpture to mosaics. Lynne Drexlerwas a vibrant colorist who favored primary colors. Her short, clustered brushstrokes give the perception of luminosity and airiness. Amaranth Ehrenhalt lived for many years in Paris. Her action paintings appear dynamic and playful, marked by a loose and energetic handling of paint. Emerging from the New York School, Grace Hartiganexcelled at finding new approaches for depicting light, space, and form. She was considered one of the most accomplished women painters of her time. Claire Falkenstein and Sonia Gechtoffwere both west coast-based artists. Falkenstein was a prominent sculptor, printmaker, painter, and jewelry designer. One of her greatest accomplishments was the construction of The New Gates of Paradise, located at the entrance of the Peggy Guggenheim Museum in Venice, Italy. Gechtofflearned how to paint from her father, and her early works are done in a Social Realist style. Around 1950, however, she familiarized herself with the work of Clyfford Still and became influenced to create highly abstract, large-scale, gestural paintings. Ernest Briggs, a student of Clyfford Still, guided Gechtoffin Still’s unique approach to abstraction. Perle Finederived much of her inspiration from Hans Hoffman and Piet Mondrian. Consequently, her work is characterized by combining two opposing styles: loose, gestural brushstrokes, with sharp, geometric forms and patterns. Buffie Johnsonwas a versatile artist who produced a range of styles during her lifetime. The common thread uniting her work is a powerful sense of spirituality, and an intense and focused use of color and form. Also a spiritualist, Jeanne Miles created highly geometric mandalas that reflected her interest in mysticism. Her circular paintings and vivid colors invite the viewer to contemplate universal mysteries. Louise Nevelson is considered one of the most significant American sculptors. Using primarily old pieces of wood and found objects, her abstract arrangements appear complex yet rhythmic. Betty Parsons, thought to be the “godmother of Abstract Expressionism,” created paintings in the fifties that showcased her avant-garde influences from the late forties. Her artistic process went through many evolutions during her career. In the early 1950’s she began making abstract constructions using pieces of wood that she found near her home in Long Island. Liz Whitney Quisgardfinds her inspiration from Oriental carpets, Byzantine mosaics, and Navajo textiles. Her final pieces are executed with dazzling pointillism, creating a visual energy out of miniscule details, patterns, and shapes. Jeanne Reynalrevolutionized the art of mosaics by thoughtfully leaving spaces of varying widths between the tiles, instilling her pieces with a sense of light. She believed that “the medium of mosaic is not painting with stones and not sculpture, but an art the essential quality of which is luminosity.” Yvonne Thomas was born in France and moved to America to study at Cooper Union, the Art Students League, and the Subject of the Artist school. She studied alongside renowned abstract painters such as Barnett Newman, Mark Rothko, and Robert Motherwell. Her paintings combine aspects of both color field painting and gestural abstraction. Finally, Stella Waitzkinstudied painting under Hans Hoffman and Willem de Kooning, however she took her work in another direction. Pursuing her interest in installation art and sculpture, Waitzkin used resin to make molds of objects from her personal life, most often books. By producing beautiful books that could not be read, Waitzkin forced the viewer to reevaluate the object as a more complex, multi-dimensional construction.

Despite their drive and artistic abilities, these women too often slipped into the shadows of their male contemporaries during the height of Abstract Expressionism, which was falsely considered a “man’s movement.” We are delighted to put in the spotlight these artists who were ignobly treated and dismissed for being women, and give them the attention and exposure that they deserve.