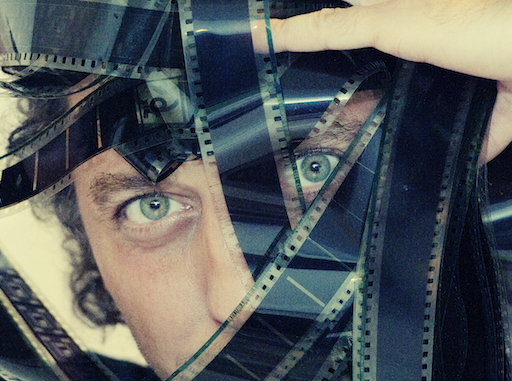 An artist and activist who works to expose human-rights abuses, Serge Hamad creates photographs that cast light on the human realities of censorship, imprisonment, and persecution. French-Algerian by birth, he was exposed to both Western and Eastern culture at a young age. "I feel that an artwork is successful when once injected into the communication channels it manages to awake a dialog," the artist says. "I use art to inform about sociopolitical situations."

Yet Hamad also makes room in his oeuvre for more light-hearted fare, including his Relax series, which depicts sun-soaked moments on Venice Beach. To learn more about his work, we spoke to the artist about his engaged approach to photography.

When and why did you decide to become a photographer?

When I was four years old I used to catch butterflies armed with a net in our garden. One day I didn't just release the specimen I caught from the net as my father (a ranger) taught me to do. I picked the butterfly out of the net and remember running inside of the house to the dining room and placing it on our buffet to admire it closely. It couldn't fly, and crawled in such an awkward manner as if it was injured. Its wings had lost of their beautiful color, and my fingers where full of pigments. I panicked and knew that I harmed the butterfly. I started to cry, which made our dog bark and howl. The result was waking up my dad from his nap.

I remember my dad understanding my dilemma, although I didn't say a single word. "You shouldn't have touched its wings," he said. "All I wanted was to look at the butterfly closer because it was so beautiful," I replied. My dad's answer was: "If you want to see them from close then take a picture." He then gave me an old Kodak bellows camera, and I took a gazillion pictures the entire summer not knowing that a camera needed film.

As we moved from our villa located in a forest to the center of the city, the camera was lost and so were my butterflies. Six years later, I received an instamatic camera for my birthday and since then I click like a happy child again.

You are walking down the street and realize you're about to walk in front of someone taking a picture and interrupt their photograph. Do you keep walking or stop and wait for them to take the shot?

I am a New Yorker, so I keep walking! Just kidding… I generally wait for them if I notice the situation.

What is your process when you shoot? Do you have any rituals?

I think I do what every pro photographer would do, check my gear and get in the frame of mind. The last one differs depending on what kind of photography I am doing. In war zones for instance, I used to totally clear my mind and rely on my instinct to tell a story in one click. For portraits and fashion being social is very important, as you have to lead and motivate sometimes an entire team to get the best result.

You shoot in both color and black and white. How do you decide which to use for a project?

When I want to scream a message, I try to create a minimalist visual impression not to distract the viewer. And that's when I chose black and white. I don't believe in rules like that street photography, for instance, has to be in black and white only. X-Rays, maybe?

You are a human rights activist as well as an artist. Do you think artists have a social responsibility?

I happen to be both, but I don't really think that an artist has to have a social responsibility as such. To me, every citizen should have a certain amount of social responsibility and civil courage. On the other hand, art can be a powerful weapon—for the good as well as the bad, unfortunately. Think of what "art" was used for in the Third Reich and, the total opposite, how Ví­ctor Jara has used his talent in Chile. But I am not a communist!

Last year you started the "Take a Stand" project, which protests human rights violations in Iran. What was your motivation for this project?

I took a stand against human rights atrocities at a young age when I decided to cover war zones. The Iran dilemma became part of my everyday life since I met my Iranian wife 23 years ago. Last year my wife edited a documentary concerning an Iranian citizen who was condemned to death by stoning. That's when we decided to start the "Take a Stand" art project.

My goal is to inform people of the social and political situation in Iran, as well as how some human rights organizations like International Campaign for Human Rights in Iran and Omid Advocates for Human Rights are helping and even saving the lives of many Iranian people. I don't have a political agenda, as I think that we need a peaceful dialog to make a change rather then a call for useless sanctions and phobia.

My main artwork and message is called OMID, which means "hope" in Farsi. Click here to find an example of it with Robert Wilson. During the exhibitions, I take the same portrait of the guests who are willing to send this message.

What's in your camera bag?

Seol Kwon ‘My earliest creations were female faces, my way of trying to manifest a reflection of myself not visible in the world around me’
Read More ▸

Cheryl Humphreys - ‘I've always been interested in color. Color is vibration in the same way sound is’
Read More ▸

Hilary Pecis - 'I think of painting as an endurance activity, a series of small movements that add up to a finished piece'
Read More ▸