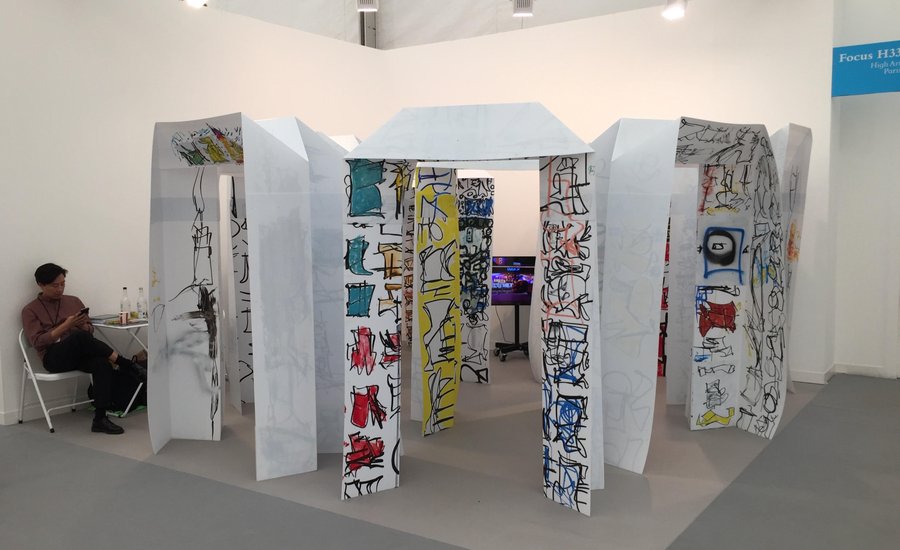 Among the blue-chip showpieces and historical treasures at this year's Frieze Art Fair there are plenty of green shoots of emerging artists making their way into the landscape, and with collectors and curators scouring the booths it's an excellent place to make a debut. Here are five up-and-coming artists from the fair to keep your eye on. 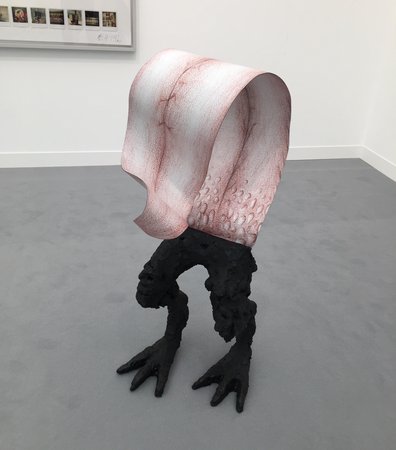 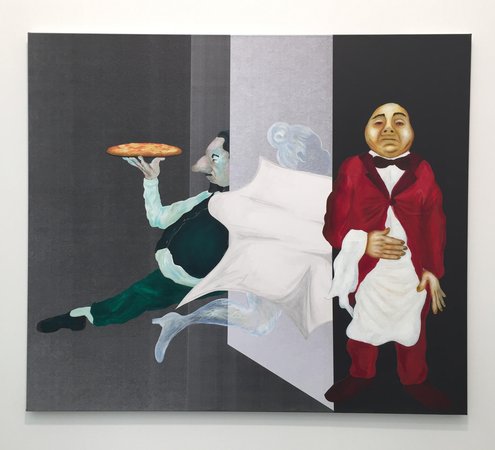 What is the most important sense that we employ in appreciating art? An easy answer would be vision, but the Vienna-based artist Anne Speier has been making a clever case in her recent work for a different mode of perception: taste. In sculptures and painting, she has been playing up the gustatory metaphor for savoring art by literalizing it, sometimes with portraits of chefs (artists) whipping up wonderments in the kitchen that waiters (dealers, curators, critics) furiously ferry out to the waiting diners (viewers, collectors); other times, she simply creates hybrid creatures with lewd, waggling tongues sprouting from from bestial hindquarters. In her solo booth at the fair, one of these lingual sculptures (€3,000) wiggles in the light breeze, threatening to lap up collectors as they walked by. 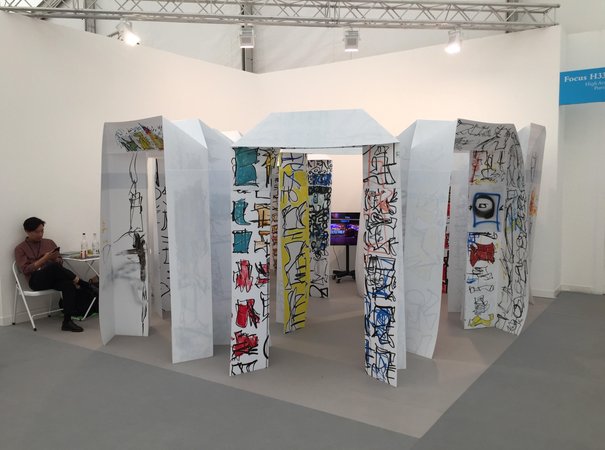 A little Stonehenge of painted, polyfluted plastic beckoned passersby to enter at the far end of Frieze’s Focus section, and inside these connecting archways viewers could find two videos, one of a bearded man making odd hand gestures outside a strip mall, the other of this same person chanting wordless incantations while dancing a bizarre pas de deux with a tree. Presented by Paris’s High Art, the booth amounted to a re-introduction to the work of the Los Angeles artist Aaron Garber-Maikovska, who became renowned during the Zombie era for his exuberantly free-handed abstract paintings that gained a collector following and a considerable amount of speculation. 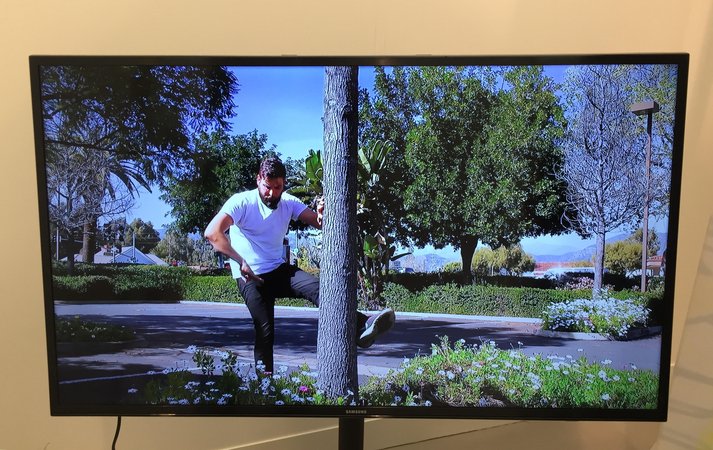 Behind these paintings, his dealers are now stressing, lies a much weirder and more comprehensive artistic program that is rooted in an interest with language, empirical knowledge of the world, and performance, which he has been doing for a decade under the influence of L.A. theater-of-the-absurd (Chris Burden, Paul McCarthy) and avant-garde dance. There’s more to the art than appealing objects, in other words, though at the fair the archways were available in nine separate sculptures (€25,000 apiece) and the videos were selling for $10,000. 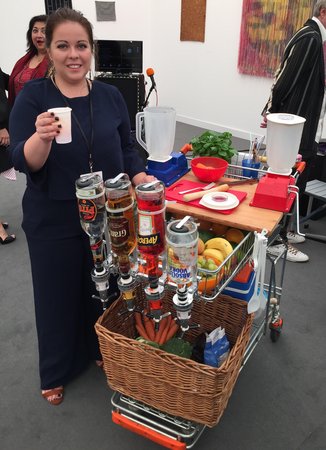 It can be refreshing when art is fun and not too complicated, and refreshment is what fairgoers literally found at A Gentil Carioca’s booth, where the rambunctious Brazilian collective known as Opavivará! had installed a miniature bar cart, where a dealer was doling out freshly made caipirinhas with the delightful addition of tangerine slices. Active since 2005, Opavivará!—whose exuberance is accurately reflected in that exclamation point—has embraced an approach to art that is all about creating vibrant experiences of all forms and getting people to interact with the work. Museums interact with their work too, apparently—the Guggenheim bought five of their cart installations at the fair, priced at €18,000 each. 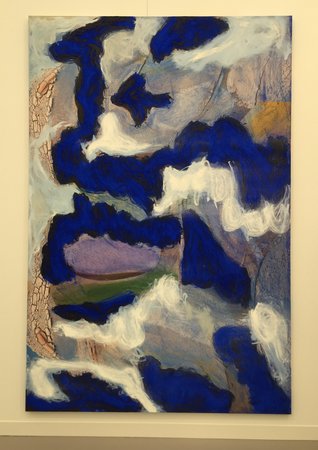 One of the most talked-about sensations of this year’s Frieze Week, the Bolivian-American artist Donna Huanca had collectors surrounded on all sides with her canny fusion of performance, painting, erotics, politics, figuration, and abstraction—in other words, everything you could ask for, all in one place. Here’s how she does it. At the Zabludowicz Collection, the artist presented a solo show that featured naked performers whose bodies were painted, draped, adorned, positioned on plinths, and otherwise transformed into living artworks on display, though ones that aggressively returned the viewers gaze rather than passively being viewed. 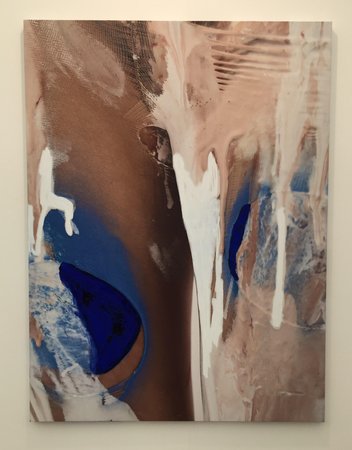 At Javier Peres’s Frieze booth, Huanca presented a series of paintings that arose from her performances, made by taking ultra-high-res photographs of her performers’ decorated skin, printing them on canvas, and then painting them over with the same oils and raw pigments that she uses in her live work.(She calls these paintings, at €17,000 to €22,500, “skins.”) Born in Houston, Huanca fits somewhere in the legacy of Yves Klein and the Viennese Actionists but also draws on Latin American culture (she spent some time studying in Mexico City on a Fullbright). Now she lives between New York and Berlin, and at 36 appears to be on the verge of becoming a major star, with another big museum show in Europe planned for next year. 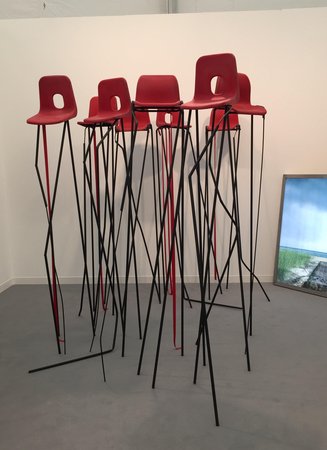 The artist and writer Jesse Darling is a very thoughtful, intelligent creative figure, making work that explores notions of the body and gender (Darling prefers to go by “they” rather than “he” or “she”) across performance, sculpture, photography, and other mediums. The Central St. Martins graduate also makes really, really fun things, like sketches of a wearily beleaguered Batman wondering why he was drawn with a hole in his midsection, and these sculptures of British primary-school chairs hoisted aloft by spindly metal legs and dangling down long red graduation ribbons. Strangely anthropomorphic and touching in their teetering fragility, those chairs, at £24,000, were among the most arrestingly original sculptures at the fair. 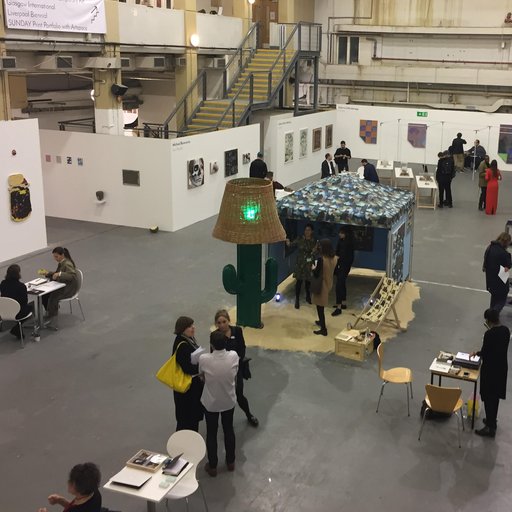 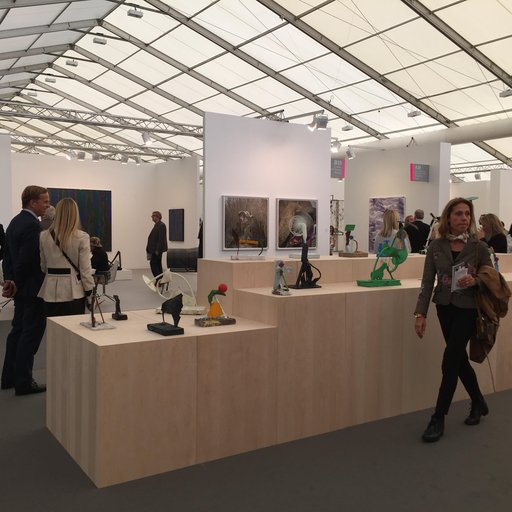 10 of the Best Artworks at Frieze London 2016
Read More ▸ 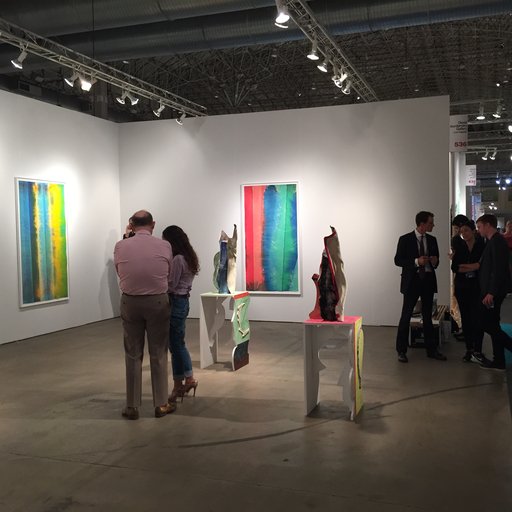 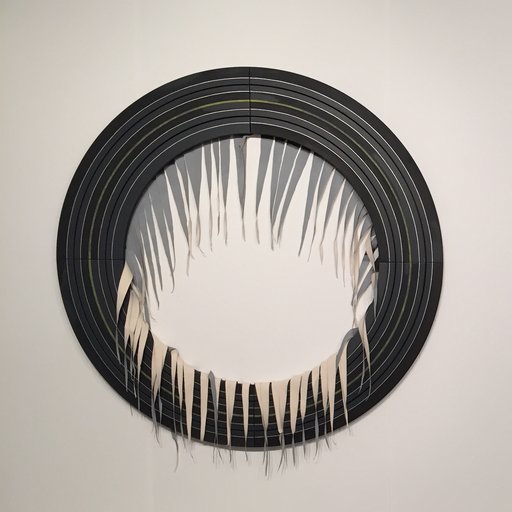