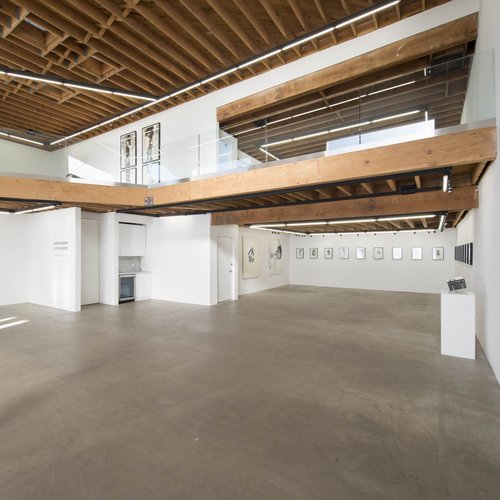 101 Exhibit
You are following
Follow this partner
Los Angeles

101/EXHIBIT was founded by architect/collector Sloan Schaffer in Miami, FL. Named after the original location at 101 NE 40th St. in Miami’s Design District, the gallery was launched in 2008. 101/EXHIBIT originally staged exhibitions highlighting figurative and Realist painting, design, ceramics, and object-based works, while transitioning towards the exhibition of contemporary art exclusively by 2011. Having produced over 20 exhibitions by the fall of 2012, the gallery opened its second location in West Hollywood, CA that winter.

The gallery’s presence in Miami was subsequently discontinued the following summer, at which point, staff relocated to West Hollywood to continue year-round programming at 8920 Melrose Ave. The gallery added a second location in the same neighborhood in January of 2016, a two-story, 3,500 square foot exhibition space with anterior courtyard at 668 N. La Peer Dr.

In the fall of 2016, 101/EXHIBIT officially closed 8920 Melrose and shifted programmatic focus to the N. La Peer Drive building. This allowed the gallery to streamline daily operations and regularly perform more ambitious projects and exhibitions. Located at the intersection of Santa Monica Blvd. and N. La Peer Drive, the space is located in the heart of West Hollywood, a vibrant and purposeful neighborhood with a long-standing patronage of the arts. Our mission is to serve as a nexus for contemporary art discourse between Los Angeles and the international art scene.

The program represents national and international emerging, mid-career artists, and numerous artist estates, with experimental programming occurring at regular intervals throughout the year. Performance, screenings, special projects, and architectural interventions are explored, often developed in response to regular dialogue with our community concerning their interests and artistic queries. Featuring a bi-level layout with anterior courtyard and seating, the gallery serves as a space where local and visiting arts advocates may find respite for reading, relaxation, and observation of the current exhibitions.

Moving into the future, 101/EXHIBIT aims to further grow as a cultivator of the greater ideas of our city’s talent and potential. Paired with artists from outside Los Angeles to broaden our vision, programming is based on, but not limited to, the traditional visual arts. We strive to put our concepts into practice within the greater scope of the art world through public exhibition, fair participation, material distribution and networking, catalog publication, experimental projects, and private events.

101/EXHIBIT seeks to highlight the exploratory relationship between artist and audience. The gallery puts an emphasis on the creative process and its potential to challenge the assumption that the traditional divisions of intellectual inquiry (formalism vs. abstraction, science vs. art, reason vs. emotion, etc.) are still adequate to deal with the meaningful questions of our time. It is our pursuit to strike a balance between such polarities in the art we exhibit, and in majority, the gallery focuses on the potential for advancements in contemporary painting to do so.