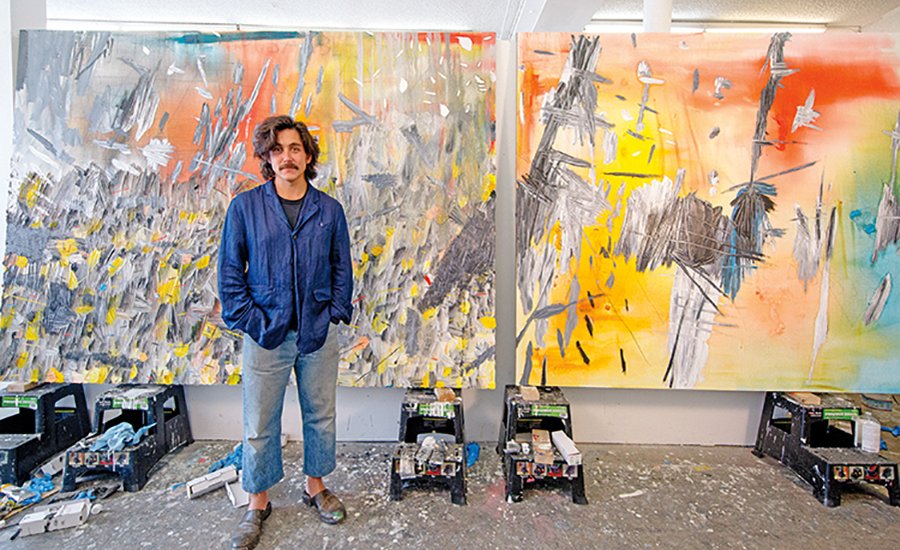 Two years ago, as a direct response to his acclaimed New York Times and Various Sources paintings, L.A.-based artist Dashiell Manley made the first foray into oil on canvas with a body of work simply titled Elegy.

“I was dealing with the content of the world, all this information and news as it was reported on the front page of The New York Times and that process was very overwhelming because it was this slowed down consumption of repetitive, redundant information,” says Manley of the works which depicted every story (with amplifications of words like ISIS, Ebola and the highlights from the 2016 election) from selected front pages of the Gray Lady written out in pastel watercolor pencil and gouache in every direction on eight-foot canvases finished with a silver wash to blur the news of the day. In the fall of 2014 he began the Various Sources works, painted in a similar manner, which were abstracted from political cartoons found in The New Yorker and Charlie Hebdo. “When I did the first show of Times paintings the attacks on Charlie Hebdo happened so all of a sudden these works that were kind of funny became pretty dark. It felt like the cartoons removed from context furthered their ability to be misunderstood, the caricatures blatantly tried to instigate.” 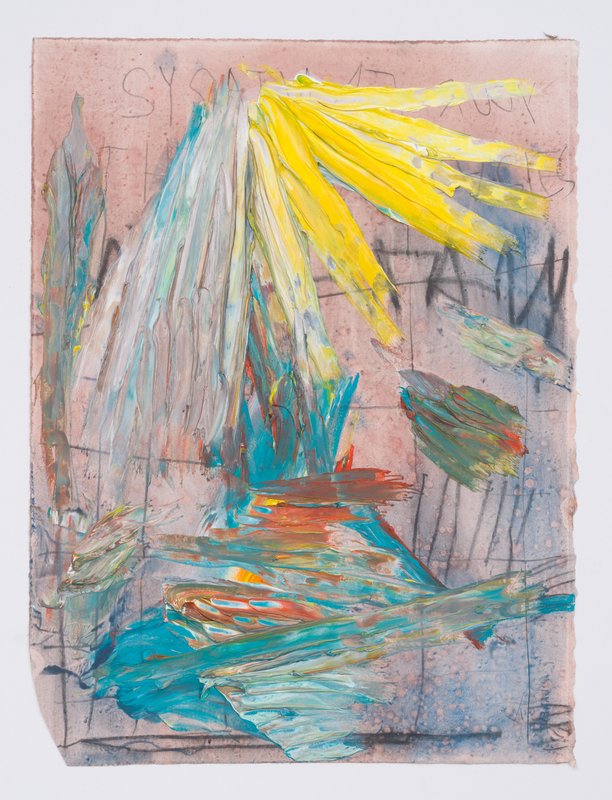 To combat the frustrations of working with real time news and satire that literally cost people their lives, Manley began a “DIY Buddhist meditation” and started making his elegiac paintings as an artistic reprieve in the studio. By establishing a set of problems on the canvas—“I’m going to try to make something ugly, then make it pleasing”—he would attempt to solve them with a series of meditative marks in oil impasto on linen that resemble zen gardens, impressions of foliage, seashells, dirty rutted roads or slashing cuts depending on perspective and palette.

“I was thinking about the three series as dealing with the same content just in three different ways; textually, pictorially and emotionally,” says Manley, who considers the Elegy paintings the last part in a trilogy, which were all shown together in his recent solo museum debut at Stanford’s Cantor Arts Center. While he agrees that they mourn the deaths of the first two series and represent a Rorschach of all his previous work, the act of making them is not completely psychological. “I want to figure out the simplest mark I can possibly make that when repeated over the entire surface, the picture plane still holds up,” he says. “How can I strip this down to the simplest gesture possible?” 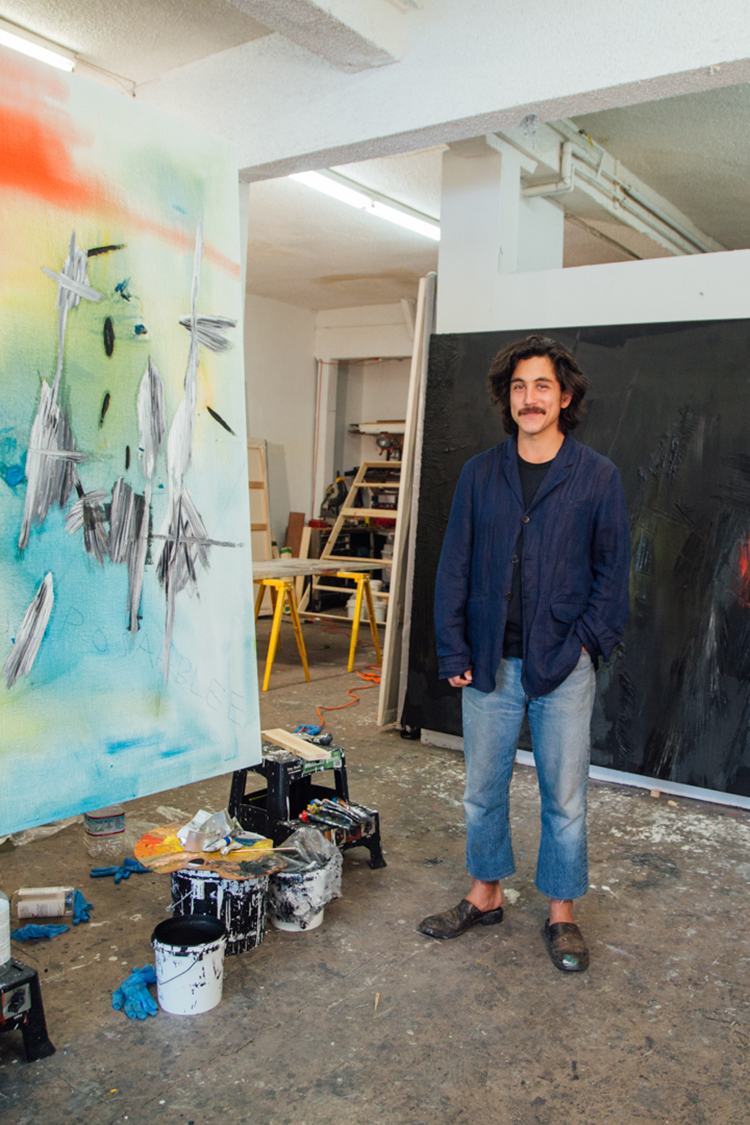 Stacks of oil-coated palette knives—his preferred tool for the works—are scattered about the studio floor and the low register vibrato of cars passing on the 101 Freeway hums in the background. Walking around his 1,700-square-foot Echo Park studio dressed in black New Balance tennis shoes and a black t-shirt tucked into oversized jeans, while his bushy mustache and ponytailed hair bloom from beneath a weathered 2016 US Open cap, he points to two 85×110-inch canvases that will be exhibited at the Los Angeles Nomadic Division this month. They mark a shift from his earlier pastels and his more recent black elegies with bright underpaintings that reveal frenetic scrawls in pencil and the phrase, ‘THE DISSSSSSPOSAABLEE.’

“I had no intention of these ever being seen,” he says of the series walking into a storage room with his private collection of early elegies. “It was this thing I was doing in this back room.” Since he graduated from UCLA in 2011, Manley’s history-mining work (featuring stop-animation, video and two-sided film still style paintings made from sets and floorboards from his studio referencing everything from texts he’d written to Edwin S. Porter’s 1903 film The Great Train Robbery) has been a lightning rod for collectors and curators. His early work was included in the Hammer’s 2012 Made in LA Biennial and the 2014 Whitney Biennial, so it was only a matter of time before his recent studio secret got out. 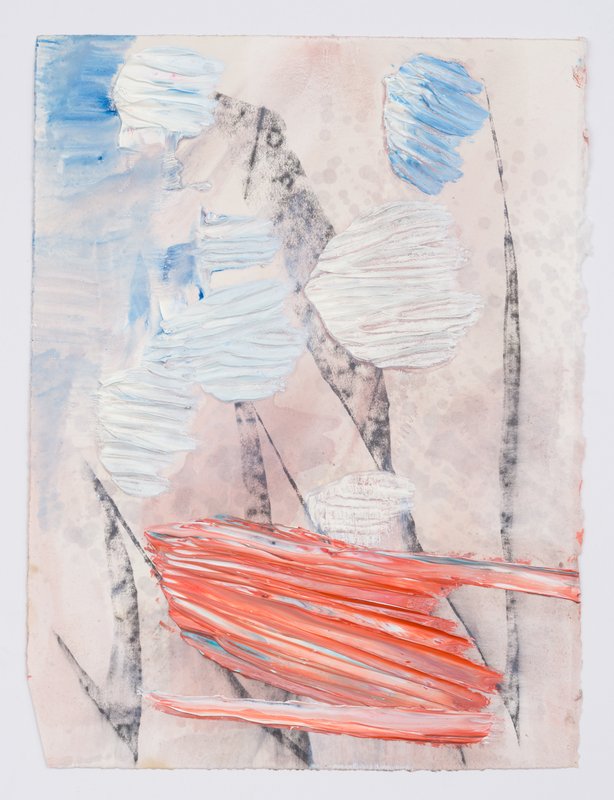 Toward the end of our visit, Manley pulls a 2×10-foot horizontal panel from a corner and mounts it on a wall in a small viewing room/office in the front of the studio to show his latest evolution. From left to right the painting moves from bright fans of colors that devolve into a series of sharp black slashes, and then concludes in a choppy sea of grey swirls that resolve in a cleansing expanse of blank white. He isn’t certain it’s finished, and not really sure he even likes it, but there’s some ineffable quality about the hypnotically chaotic work that just won’t let him go.

“There’s something about my makeup or my intuition that is fundamentally flawed in that when I think I’m going to like something forever, in a year I’m like, ‘God, what a piece of shit.’ In other words, my judgment is just fucked,” he says with a grin. “This will become my favorite painting." 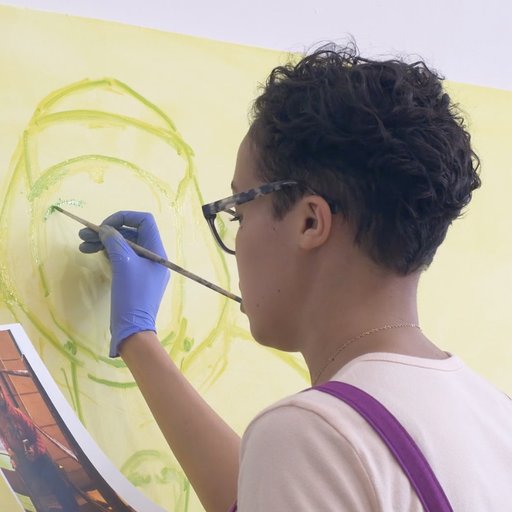 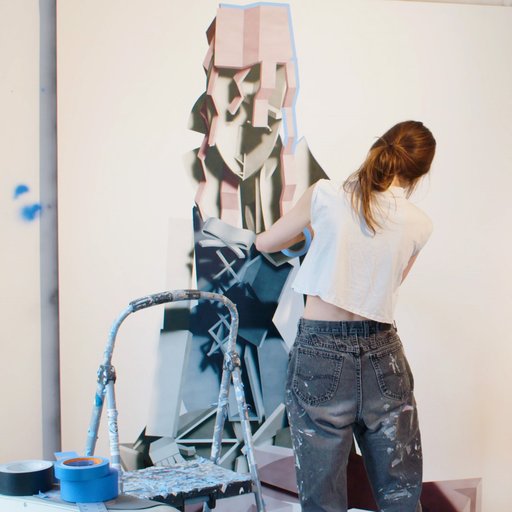 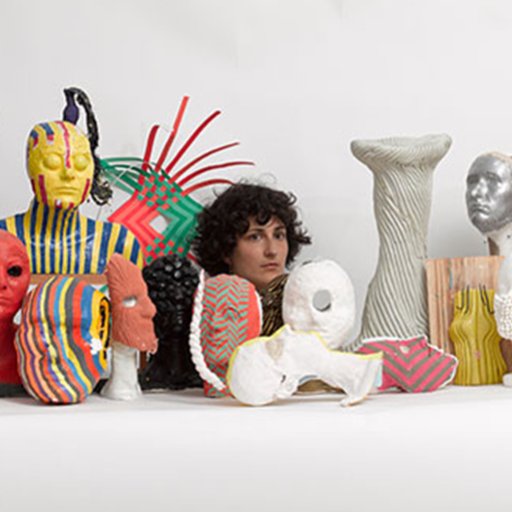 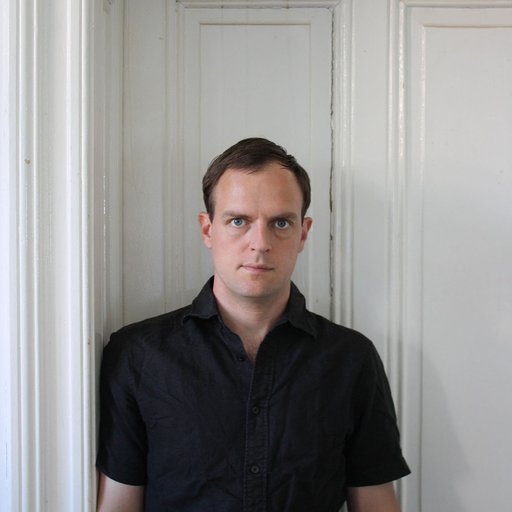