What Was Dada? Our Primer on the Revolutionary Roots of the Original Anti-Art Movement 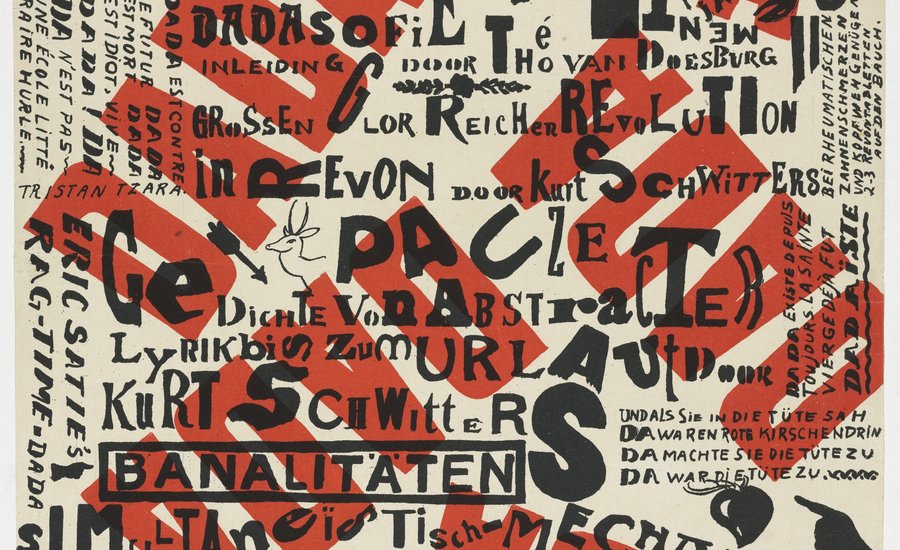 The early twentieth century positively lousy with radical art movements, most trying in one way or another to reckon with the culture-shaking shifts of that heady period. Few had as much fun with this self-serious task as the artists behind Dada, the international “anti-art” group dedicated to challenging the strictures of good taste and the sanctity of art itself. Before heading to MoMA to check out “Dadaglobe Reconstructed” (featuring works by 50 artists from Tristan Tzara’s unfinished anthology Dadaglobe), brush up on your Dada history with this brief essay from Phaidon’sArt in Time.

“Dada means nothing,” wrote Tristan Tzara in the 1918 Dada Manifesto. Indeed, Dada is definable more easily by what it was not than by what it was. It was not a cohesive movement, but a mentality that was taken up in a variety of ways: chaotic, experimental performance in Zürich from 1916; satirical collage and painting in Berlin and Cologne; playful poetry and “Ready-mades” in Paris and New York. It was not about formal aesthetics or skill, unlike even such movements such as Cubism or Futurism. It was not about conforming: class, religion, war, and art itself were all under scrutiny and attack by often humorous and always incisive artists who sought to break down barriers between art and everyday life. 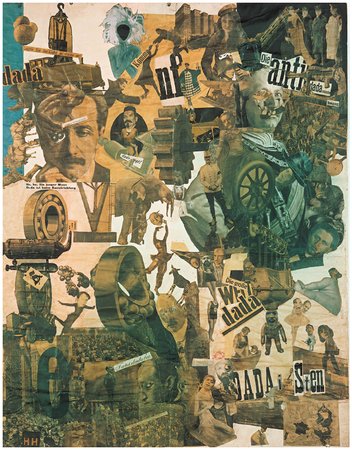 For post-war Germany, everyday life was wrought with anxiety and a sense of wounded loss; both Cut with the Dada Kitchen Knife, by Hannah Höch (1889–1978), and The Worker Picture, by Kurt Schwitters (1887–1948), speak to this with painful eloquence. Höch used photos from newspapers and magazines to create a montage in which the placement of image and text is telling: Kaiser Wilhelm’s face appears surrounding the word “anti,” and Höch’s own face is next to a map of countries with female suffrage. The domestic kitchen knife suggests the abilities of female artists to cut through the gluttony at the heart of the war, symbolized by the male-gendered “beer-belly” of the title. 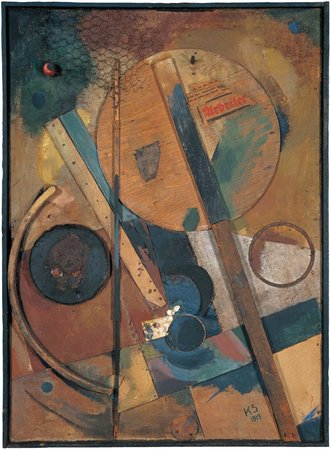 The title of Schwitters’s piece comes from a fragment of newspaper text pasted into the composition: Arbeiter (“worker”). Indicating the working class, the word is also a pun, suggesting that the picture itself might “function” with its system of cogs and pistons. However, this is no slick, well-oiled mechanism, but one created from fragments of wood, wire, and newsprint, seeming to stutter and grind; both picture and worker are vulnerable and struggling. 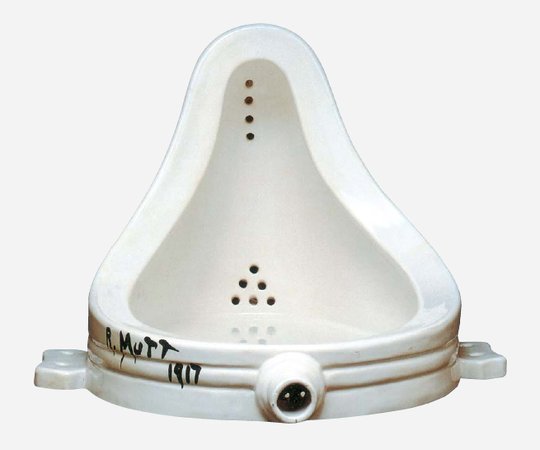 The Dada work produced in Paris and New York may appear whimsical in comparison, but it has an important legacy in Surrealism. Marcel Duchamp (1887–1968) used an upturned urinal in Fountain—signed with the pseudonym “R. Mutt”—transforming it into a “Ready-made,” an existing object, manipulated subtly if at all, and claimed as “art.” It was rejected from the 1917 Society of Independent Artists exhibition in New York, despite the promise that all works submitted would be shown. Fountain was dismissed as “immoral” and “pure plumbing,” but the repost in a New York publication The Blindman is clear: “Whether Mr. Mutt with his own hands made the fountain or not has no importance. He CHOSE it. He took an ordinary article of life, placed it so that its useful significance disappeared under a new title and point of view.” Duchamp thus questions what art should be, defying the importance of originality and transforming the everyday into something inherently dysfunctional and yet far from decorative. 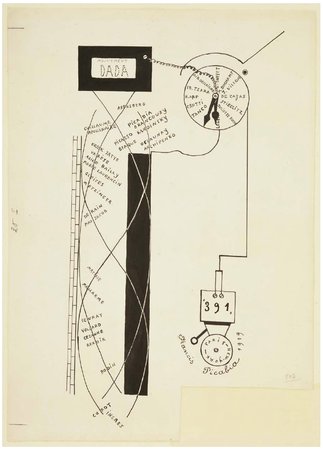 Dada’s place within art history is the subject of Dada Movement, by Francis Picabia (1879–1953): the image of a battery-operated clock mechanism marks the endpoint in a succession of attempts to define what modern art should be, from Ingres to Kandinsky. Dada acts as a transformer, redefining both art and the measurement of life itself: the clock face contains the names of several key Dadaists, and the pendulum weight is labeled “391,” after his New York Dada publication. 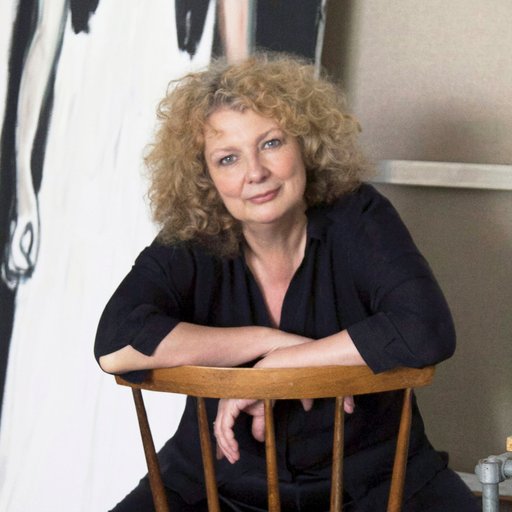 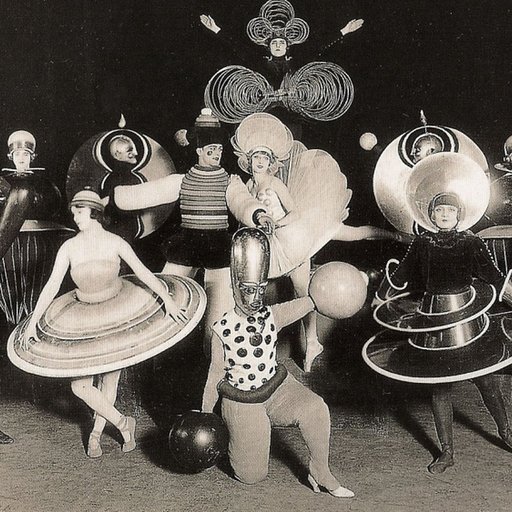 What Was the Bauhaus, Anyway? A Brief History of the Trailblazing Modernist Movement
Read More ▸ 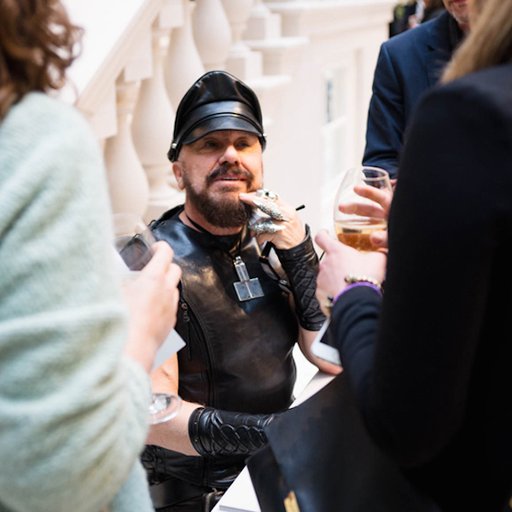 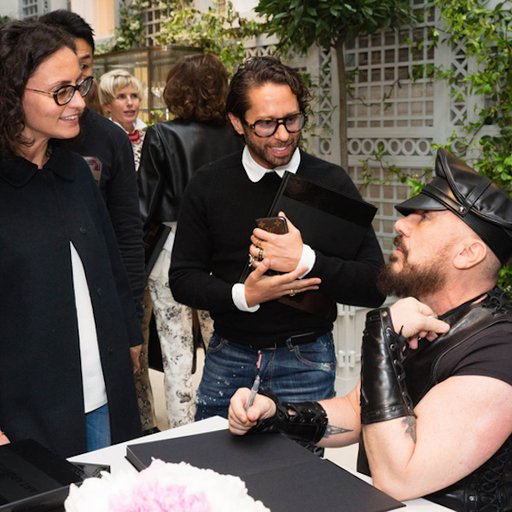 Brought to You By Peter Marino: 5 Top-Tier Artworks Commissioned by the Starchitect
Read More ▸

What Was Dada? Our Primer on the Revolutionary Roots of the Original Anti-Art Movement