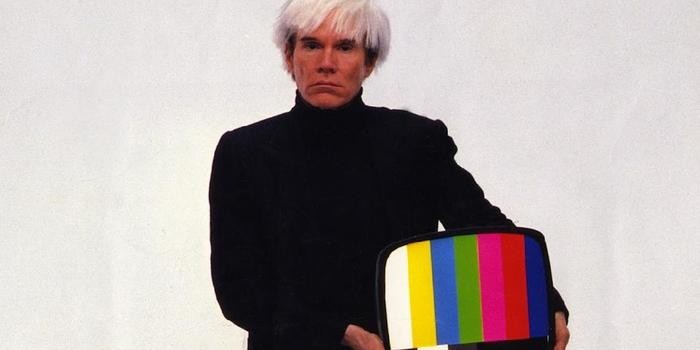 The youngest of three brothers born to two Slovakian immigrants in Pittsburgh, Pennsylvania, his birth name was actually Andrew Warhola. Andy dropped the extra “a” after college while submitting to design firms.

Warhol's trademark "blotted-ink" style, best seen in his early commercial illustrations of shoes for magazine advertisements, was an elusively imitable technique. When asked about how he developed the idea, the artist replied, "Well, it was just that I didn't like the way I drew … I realized you can do an ink blot and do that kind of look, and then it would look printed somehow."

Though obsessed with making money as a fine artist, Warhol didn't want financially. Following his first assignment as a young graphic designer, fittingly for an article in Glamour called "Success is a Job in New York," he went on to have a rather lucrative career as a commercial artist, doing everything from designing album covers and Christmas cards to his signature shoe ads for I. Miller.

He managed the Velvet Underground.

Ever so briefly for a period in the mid-60's, Andy Warhol actually co-managed the Velvet Underground, a band he had adopted to be a part of his "Exploding Plastic Inevitable" multimedia performance show. Along with introducing the band to Nico, one of Warhol's "superstars" who would perform with the band at his request, the artist even produced their debut album, "The Velvet Underground & Nico," and created the record's iconic album art.

On and off for about 10 years, Andy Warhol designed book jackets for the independent book publisher, where he was apparently a hit with all the secretaries for sneaking origami sculptures on their desks. It was at New Directions, the first American publisher of Henry Miller and Jorge Luis Borges, that Warhol met artist Ray Johnson, an influential Pop and Fluxus artist.

Andy Warhol had a “wife.”


Well, nominally, at least. The artist became so preoccupied with capturing all of his conversations that he carried a portable tape recorder with him everywhere he went. The device became such an attachment that Warhol began referring to it as his “wife,” and some of the recordings were used as material to supplement his later books.

He published an absurdist cookbook.

Collaborating with his friend Suzie Frankfurth, Andy Warhol published Wild Rasperries in 1959, a cookbook full of inedible recipes, its title a humorous reference to Ingmar Bergman's film Wild Strawberries, which was released two years prior. The faux cookbook included hand-colored illustrations by Warhol, along with unusually specific instructions, like "take the Carey Cadillac to the side entrance and receive the pig at exactly 6:45."

He curated a show at RISD.

After being invited to organize an exhibition at the Rhode Island School of Design's art museum in 1970, Andy Warhol was unsurprisingly untraditional in his role as one of the first artist-as-curators. His show, "Raid the Icebox," was not only comprised of unusual objects Warhol selected from the museum's cold storage areas, including cabinets of shoes, Navajo blankets, and costume accessories, but its arrangement—paintings stacked on the floor, spare Windsor chairs hung on the wall—broke a number of unwritten rules regarding the hierarchical importance of works of art.

He was supposed to be on the cover of Life magazine.

Warhol's near fatal shooting by Valerie Solanas in June of 1968 received front page coverage from the local New York newspapers, but his planned appearance in a cover story on that week's Life magazine was bumped for a piece on the Robert F. Kennedy assassination. In fact, the magazine's managing editor accused Warhol of contributing to the Senator's untimely death, accusing him of “having injected so much craziness into American society that it was leading to the killing of the country’s political heroes.”

Knowing Warhol's sense for showmanship and his prescient thinking regarding the evolution of visual culture, it should come as no surprise that his four-minute video, "Andy Warhol Eats a Hamburger" has reached almost 700,000 views on YouTube.

Click here to read an introduction to 11 of Warhol's most iconic series.