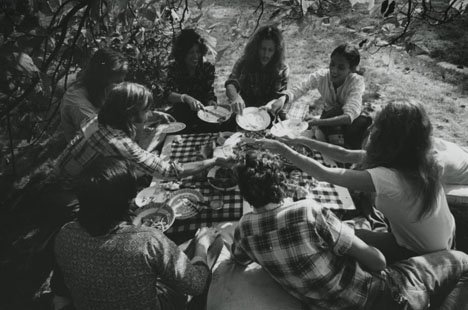 Universal Limited Art Editions was born out of one woman's necessity to make a living and driven by her desire to make a contribution to the world. Born in Ekaterinburg, Russia, Tatyana Grosman spent almost half of her life fleeing war and revolution that pursued her to Japan, Dresden, Paris, and finally New York where she settled in 1943. When her husband, Maurice, suffered a severe heart attack in 1955, the responsibility fell upon her to support them. She decided that she would publish illustrated books, bringing the French tradition of livres d'artistes to America. For money, the Grosmans began reproducing paintings by artists such as Marc Chagall and Grandma Moses from their small cottage on Long Island. However, in 1957 during a visit to William Lieberman, then a curator at the Museum of Modern Art, Mrs. Grosman learned that although he was impressed by the quality of the work, he was not interested in collecting reproductions. He encouraged her to consider collaborating with artists to create original prints.

By chance, the Grosmans discovered two Bavarian lithographic stones in their front yard, a neighbor willing to sell a lithographic press, and a local printer ready to demonstrate how to use the press. Mrs. Grosman approached a friend at Grove Press, a publisher of contemporary poetry, and asked him to suggest a poet that she should work with. He suggested Frank O'Hara. She then took the idea to Larry Rivers whom she had met in 1950 on a transcontinental voyage. O'Hara happened to be visiting Rivers that day and Mrs. Grosman saw it as divine providence. They started a project immediately. Stones, a thirteen page portfolio/book, took two years to complete and became known as the first ULAE publication.

Understanding her commitment, Rivers encouraged other artists such as Grace Hartigan, Helen Frankenthaler (married to Robert Motherwell), and Marisol to make prints at ULAE. The Grosmans also began seeking young talent on their own. They went to countless galleries and museums, keeping an eye on the young artists that were emerging; making a list of artists to approach. In 1960, Mrs. Grosman wrote to Jasper Johns and invited him to the studio. Through Johns she met Robert Rauschenberg. At their suggestion she invited Jim Dine. Rauschenberg then brought Cy Twombly and Johns brought James Rosenquist and Edwin Schlossberg. Schlosseberg brought Buckminster Fuller. William Lieberman suggested Barnett Newman. One by one, they came to make their mark.

Make their mark, they did and so did Tatyana Grosman. Only seven years after ULAE published its first edition, ninety-seven of its editions were chosen for the exhibition that inaugurated the new graphic galleries at the Museum of Modern Art. From that point on a series of grants were established enabling MoMA to acquire the first print of every ULAE edition, a tradition that still continues today.

As ULAE's reputation grew so did the list of artists and their needs. Until 1966, the studio had only focused on lithography. But artists were becoming interested in working with intaglio. Responding to their growing interests, Mrs. Grosman applied and received a grant from the National Endowment for the Arts in 1966, allowing her to hire another printer and establish an intaglio studio. Within the year, Johns, Bontecou, Frankenthaler, Newman, Marisol, Rosenquist, Motherwell, and Twombly all worked within the new medium.

But finances remained grim and ULAE needed to find another outlet for making money to support their limited editions. At the encouragement of Bill Goldston, a student of printer Zigmunds Priede originally brought to ULAE in 1969 to work on photo-sensitive stones for Rauschenberg, Mrs. Grosman bought an offset press. Goldston convinced Mrs. Grosman that they would be able to produce high quality posters and books that could subsidize their limited editions. However, the artists were intrigued by the new equipment and it wasn't long before the offset press was used to create editions. Johns used it to complete Decoy in 1971. Dine used it for Flaubert's Favorites and Rosenquist for Off the Continental Divide.

The next technical challenge became relief printing from wood blocks. For years Frankenthaler had loved the traditional woodcuts of Japan. In 1973 after seeing a woodcut show, she decided to try her hand at the new medium. With Goldston by her side, Frankenthaler's experimentation resulted in East and Beyond. And Savage Breeze. These prints are often attributed to causing the revival of woodcuts in the United States.

Because Goldston was the first printer to really dedicate himself to intensive technical experimentation at ULAE, he quickly moved into a leadership position. Impressed by his abilities, Mrs. Grosman encouraged Goldston to take charge of running both the studio and the business when her husband died in 1976. From that point, she guided him until her death in 1982 when he assumed responsibility for the business. By then, he was familiar with all aspects of ULAE and was ready to move the studio in a younger direction. He purchased different and larger presses, established additional studios, hired more printers, and invited a new group of young artists to work at the studio.

No new artists had joined the ULAE "family" since the early '70s so Goldston approached a group of artists whose work he had seen around the country. He invited Terry Winters, BBill Jensen, Susan Rothenberg, Carroll Dunham, and Elizabeth Murray. Their work was painterly and indicated a move away from the pop sensibility that dominated ULAE in the early years. The only aspects they had in common with their predecessors was that they were young, eager to work, and had never made a print. The expanded range of equipment allowed prints to be made that were unimaginable in the early—three-dimensional prints, screen prints, and photogravures. The '90s saw yet another group of artists arrive at ULAE—Jane Hammond, Kiki Smith, Julian Lethbridge, and Suzanne McClelland. The work of each was strikingly different from that of the other but they found a similarity in the need to work on copper, stone, or aluminum.

In guiding ULAE's expansion, Goldston has maintained the sense of community and spirit always associated with the house on Skidmore Place. Only one artist is scheduled to visit the studio on any given day. Lunch is still served to the staff, artists, visiting collectors, curators, and writers, and prints are still shown upstairs at the house in a small attic room. The vision and determination of Goldston and the veteran artists and printers have sustained Mrs. Grosman's memory through their work and their own dedication to quality and the necessity of experimentation