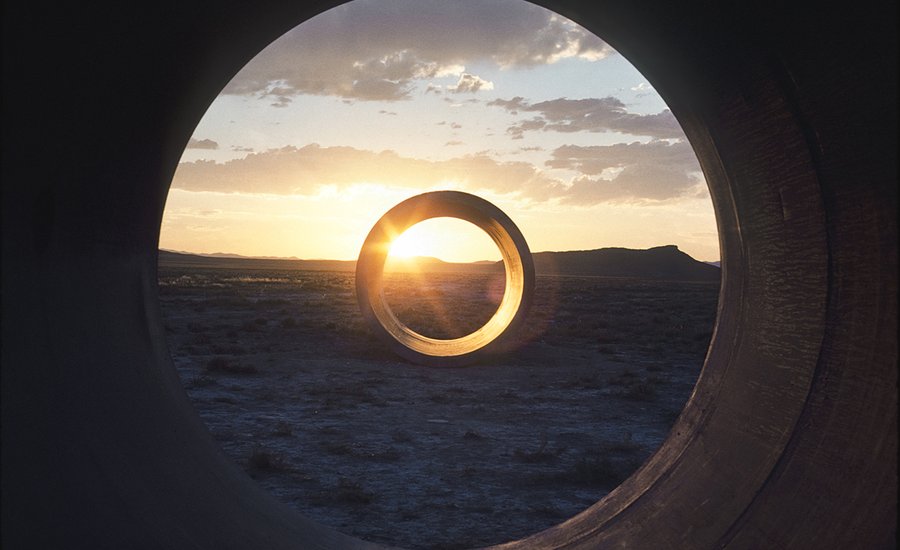 For the third installment of our cross-country road trip—tracking the best of American Land Art with exceprts from Phaidon’s site-sepcific art anthology Art & Place—we head west to the barren deserts and saline lakes of Utah to find Nancy Holt's Sun Tunnels in the Great Basin Desert and Robert Smithson's Spiral Jetty at the Great Salt Lake. If you find yourself wandering this part of the country, veer off the beaten path and check out these two Land Art legacies. 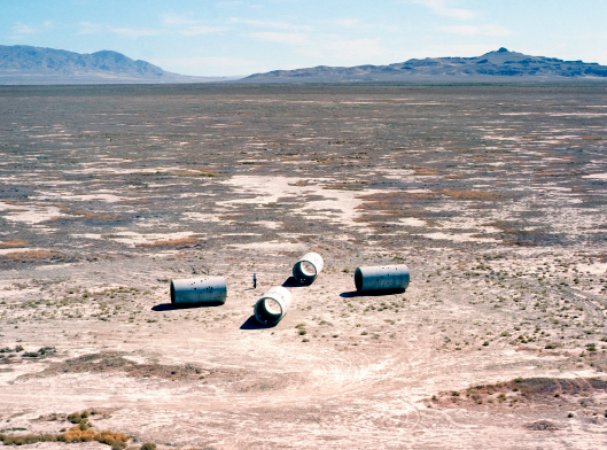 Like so many 1970s works of American land art, a visit to Sun Tunnels requires a pilgrimage of sorts. Situated in the Great Basin Desert, which lies between the Rocky Mountains and the Sierra Nevada range, this work by Nancy Holt (b.1938) is about 8 km (5 miles) south of the ghost town of Lucin and 64 km (40 miles) from the nearest active town. Venturing out on Interstate 80 in Utah, just a few miles east of the Nevada border, visitors turn onto Route 30, and later turn south onto a dirt road. After about 16 km (10 miles) Holt’s work becomes visible in the east. Four large cylinders are arranged on the ground like an open ×, in the middle of miles and miles of open desolate terrain with occasional sparse brush. In the distance, majestic snow-capped mountains barely pierce the horizon; even they seem minuscule in comparison to this expanse of desert and the canopy of sky above. The four tubes are made of concrete highway conduit, normally used in underground drainage systems for road construction. Above ground, however, the tunnels form a frame of reference in a region whose openness is awesome and disorienting. 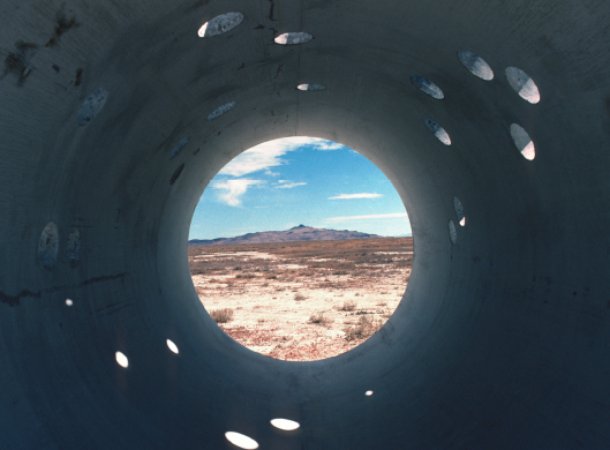 The work is made complete by its interaction with the sun and stars. One axis of the × lines up with the rising and setting of the sun during the summer solstice, the other with the winter solstice. Twice a year, at their respective dawns and twilights, each circular tunnel frames the circle of the sun and becomes ablaze with golden light. The sun seems for a few moments to exist at the viewer’s level, sitting on the horizontal plane of the desert as it communes with the viewer through Holt’s cosmic conduit. The artist drilled a series of holes into the tunnels so that each lines up with a constellation: Capricorn, Columba, Draco, and Perseus. During the day, sunlight casts the stellar patterns on the curved floor of the tunnels’ shadowed interiors. Like Neolithic monuments from millennia past, Holt’s Sun Tunnels do not exist simply as sculptures in and of themselves, but act as vehicles that connect the viewer to the larger cosmos. 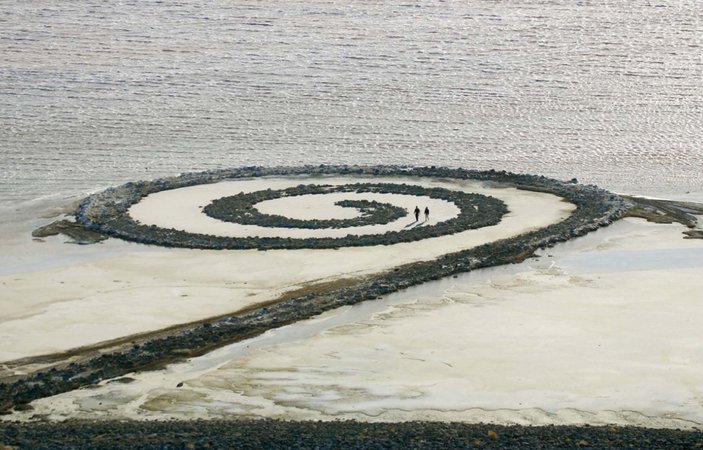 Disenchanted with the gallery system and museums, which he called “mausoleums for art,” sculptor Robert Smithson (1938–73) moved his work outdoors in the late 1960s, becoming one of land art’s major figures in the process. His 457 m- (1,500 ft-) long Spiral Jetty is not a commodity to be sold, like a painting in a gallery, but a site far away from urban and commercial worlds—a place where the viewer can re-experience nature’s vast scale by walking out on a coil of earth the artist created by bulldozing material from the shore into the lake. Smithson had wide-ranging interests, including geology and other sciences. He was fascinated by red-hued lakes in Bolivia, about which he had read; the red algae of the Great Salt Lake offered him a chance to mimic those color effects. Smithson also had a lifelong interest in crystals; the inevitability of salt crystal growth made the lake an ideal site.

Its spiral form and horizontal orientation detach Spiral Jetty from the tradition of figurative sculpture. The scale, too, renders the human spectator insignificantly small. The work is sometimes partially submerged, depending on the lake’s water levels, and the salt crystals that grow on it represent a process of inorganic growth. Smithson was looking beyond human subjects for inspiration. Like his counterparts in the Minimalist movement in sculpture, such as Donald Judd, he felt that sculpture had been tied to the human figure for too long, often having a latent anthropomorphic reference even when the work was completely abstract. 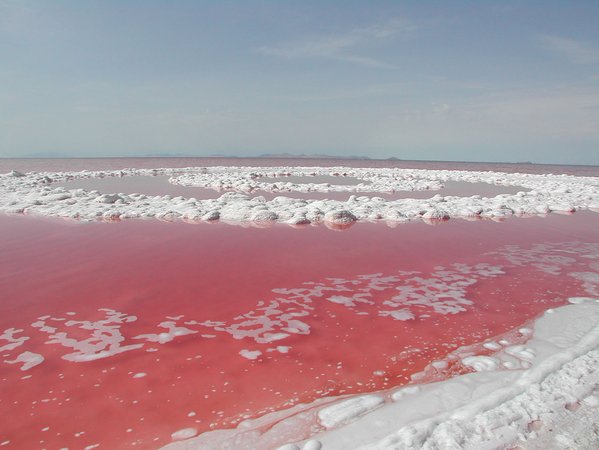 Walking from the shore to the center, following the spiral of the artwork, the viewer travels in an anticlockwise direction. This suggests a movement backwards in time. Thus Smithson invites the viewer to ponder geological time as he or she stands on the rocks and earth of the spiral and look out at the lake and the surrounding landscape. The viewer is also invited to think about cosmological time as the shape recalls the spirals of galaxies. In 1970, a year after the first moon landing, outer space and our place within it was at the forefront of consciousness.

The Dia Foundation, who maintains the work and holds a lease on the site, received Spiral Jetty as a gift from the artist’s estate in 1999. 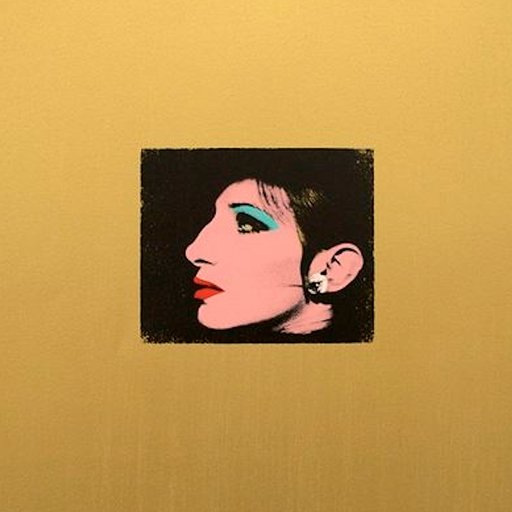 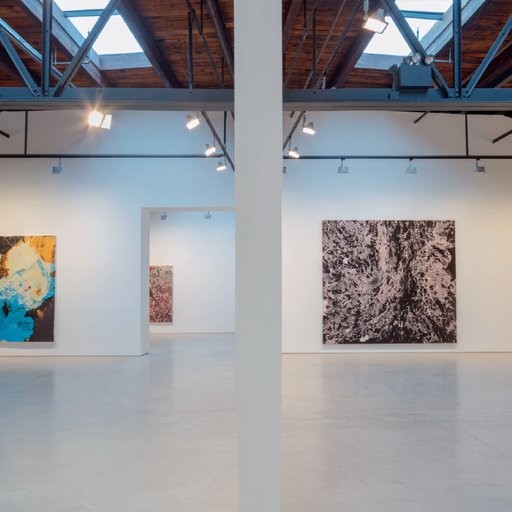 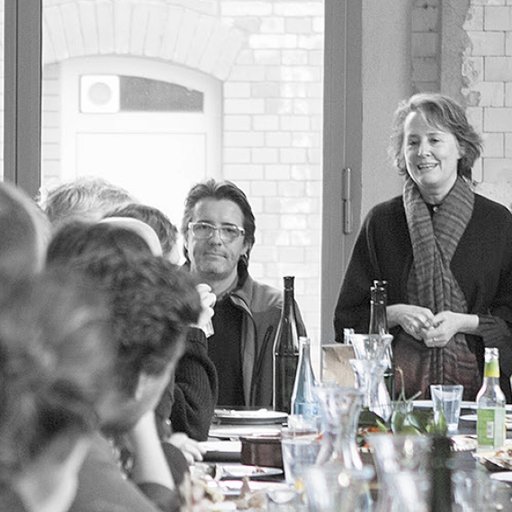 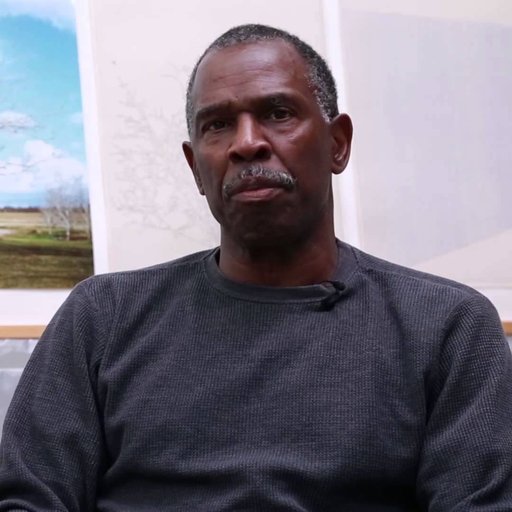 "Don’t Do Anything Illegal": Charles Gaines on How to Stay in the Game as an Artist
Read More ▸