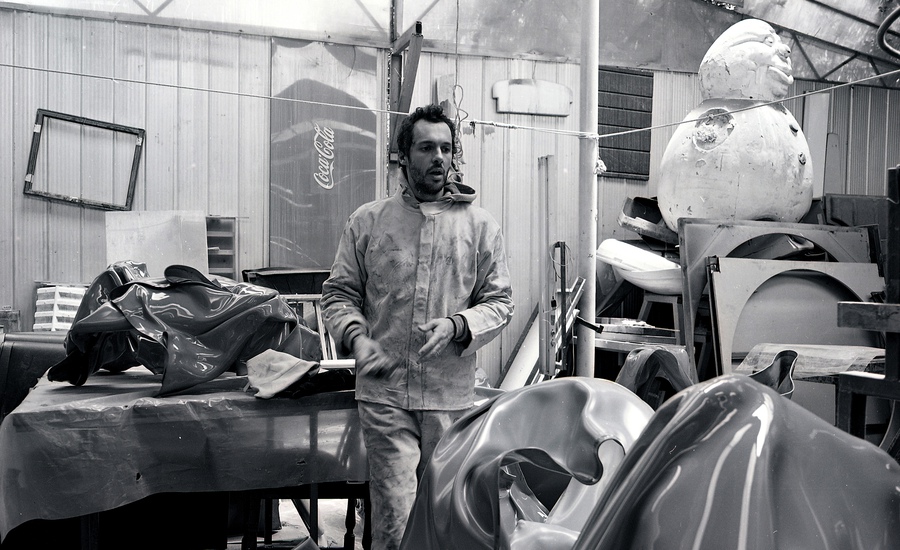 Benjamín Ossa’s work concerns the relationship between the human body, time, and space, write Hana Noorali and Lynton Talbot in Phaidon’s new book Prime: Art’s Next Generation. "Ossa employs light as a principal material, activated by structures, images, and interventions that remain ephemeral and unstable. The technical and formal precision Ossa employs to create his pieces belies the seemingly natural and organic interactions the works generate. In Cuba, towering above head height and installed outdoors on the Malecón (the esplanade that stretches along Havana’s seafront), a shimmering spectacle of dancing orbs of light formed part of the 13th Havana Biennial in 2019. Titled Un invisible faro [An invisible lighthouse] (2019), it is a monument made up of an open network of metal triangles that form a circular, architectural structure.

Metal disks, some of them painted in bright colors, hang from the bars of the structure, rendering it at times translucent and at others reflective. Harnessing the natural elements that surround it, this quasi lighthouse occupies a space between reality and perception, dancing in the interstice of materiality and the imperceptible. The disks that continuously spin in the wind simultaneously amplify their surroundings and are consumed by them, paradoxically confronting the environment while being absorbed by it too. Like a lighthouse, this work signals its presence to others, but, as a house made of light, it vanishes into its immediate environment. Impervious to the time of day, weather conditions, or proximity of people, the tower becomes what it sees and sees what it becomes. At night, it is the stars and the moon, in the day, the hot, hazy sky and bright sun. 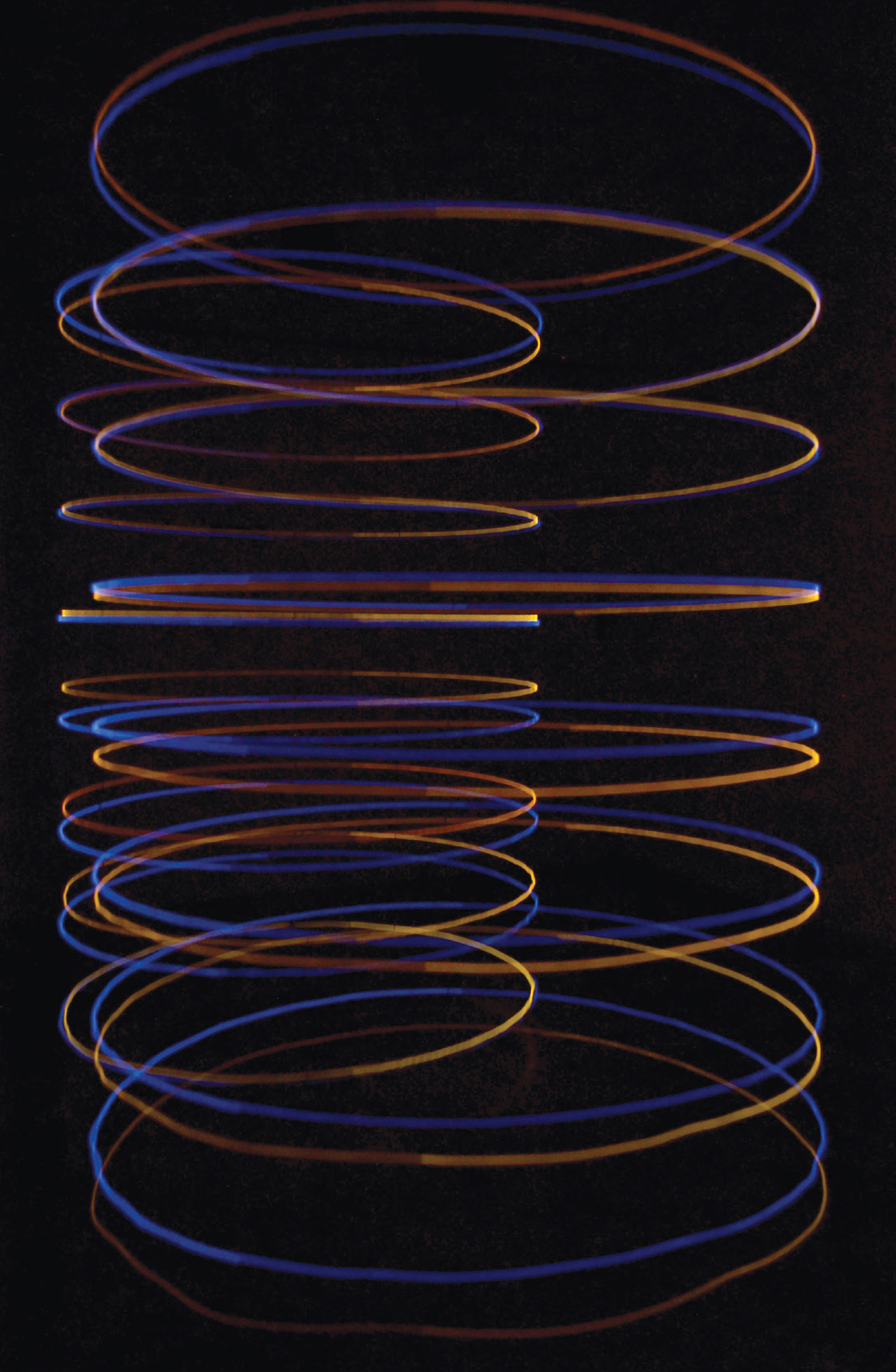 For En la luz [In the light] (2011), Ossa took the existing architectural environment of a room and masked the windows with graphic drawings made from cut-out paper. The ephemerality of this installation is similarly brought to the fore, and a paradox emerges: as light beams through the papered windows, the detailed cuts vanish due to the brightness of the sun saturating the panes. The drawing occupies the room’s interior instead, as the now invisible structures manipulate the flow of sunlight, emanating patterns that stretch across the floors in a golden hue. En la luz prompts the viewer to consider the Earth’s own movement around the sun as it alters how the image appears throughout the day.

This interplay between structure and disorder, cause and effect, the stable and the ephemeral, intention and chance, speaks to a deep-rooted interest in phenomenology, embodied experience, and perception. To encounter and experience Ossa’s work is to see how light can be manipulated at the same time as it can erode its own function; trapped in this perceptual anomaly, the viewer must consider their own relation and proximity to the work and to the world itself." - Hana Noorali and Lynton Talbot. 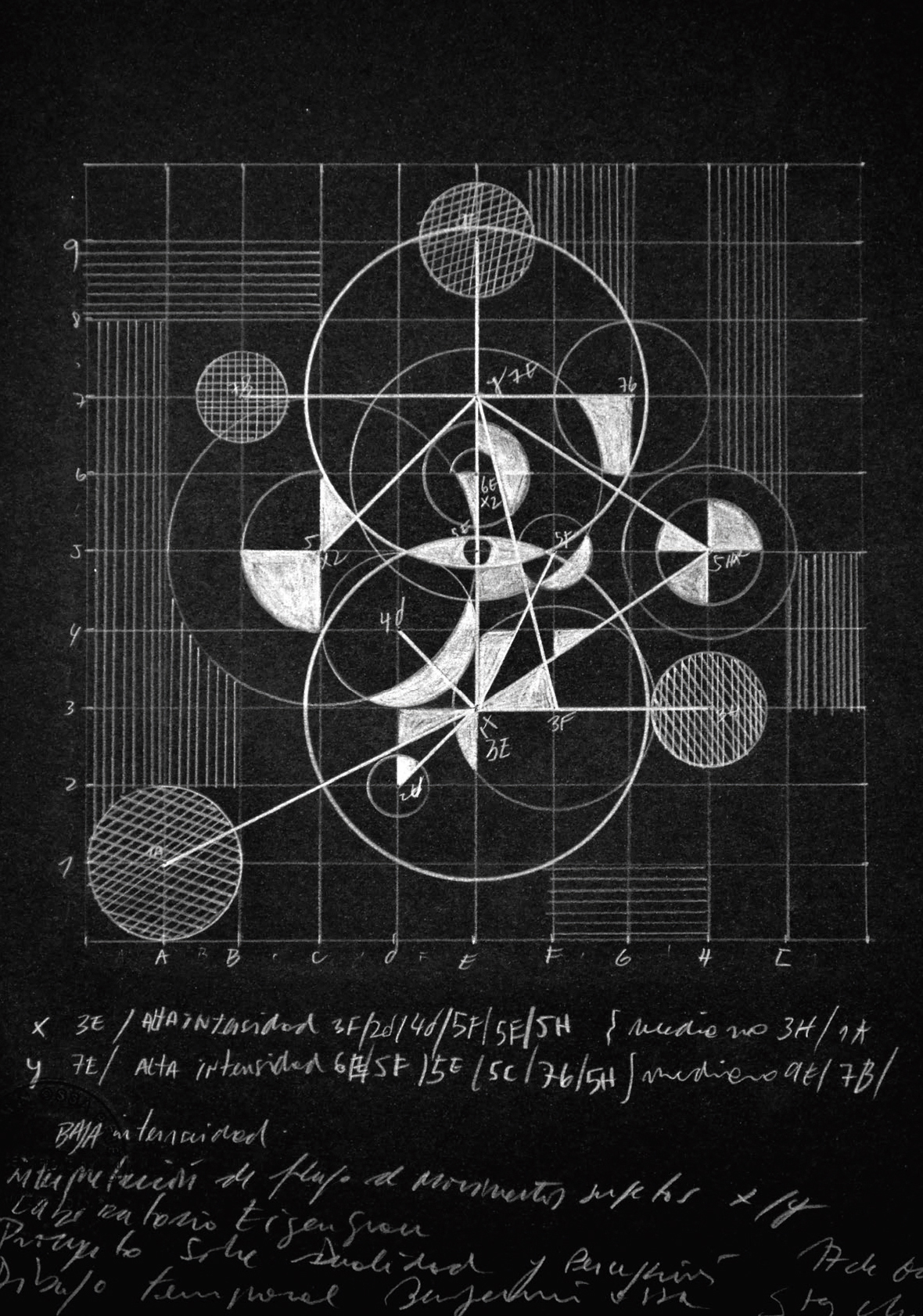 Ossa is one of over a hundred contemporary artists to be featured in Prime: Art's Next Generation, Phaidon's new survey of promising contemporary artists. We asked him a few questions about his life and art. When you've read the story take a look at Ossa's artist page on Artspace.

How would you describe what you do? My work deals with relational and perceptual dimensions between body and space through installations and events that stimulate experiences, using light as a medium and tool. I am attracted to systems of interaction, thermodynamics, mathematics and temporal principles. My artistic research addresses the creation of unique experiences through phenomena that transit in time and through sensory stimuli to activate perception, seeking to promote an enhanced awareness of your surroundings. Drawing is a constant in my work; it has slowly become a means of exploration and a precedent of almost all of my projects.

What are the hardest things for you to get ‘right’ and what are your unique challenges? The most difficult thing is trying not to lose focus on what you are doing. The world today more than ever is moving fast, the amount of information circulating presents a challenge, it is easy to get lost and behave erratically.  Keeping calm and giving time for ideas to develop naturally is something that the current environment does not stimulate. I'm constantly reminding myself to stay focused and not lose track of the ideas that have made me become an artist. 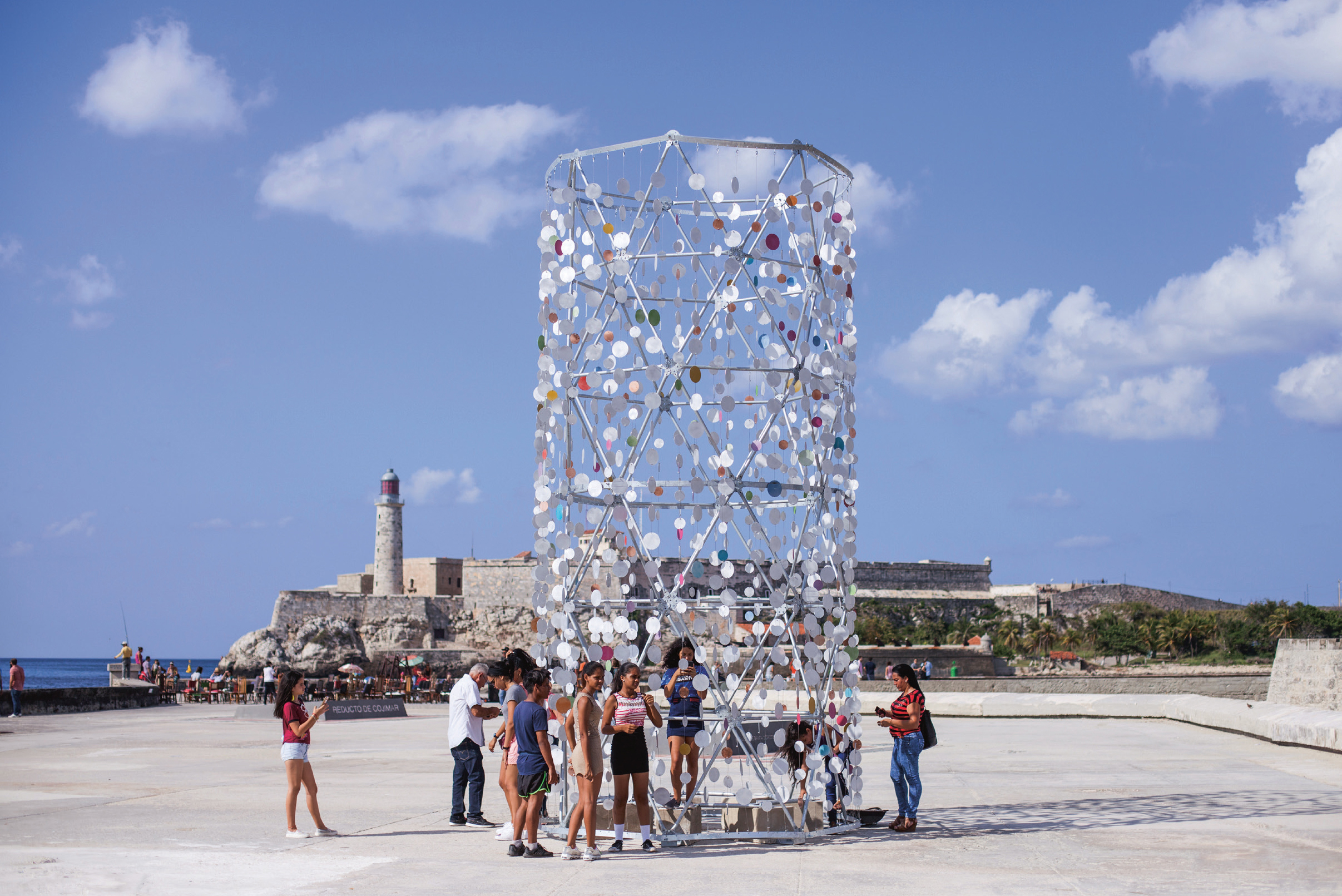 What’s the most exciting thing about where you are in your career right now? I think that for some time now I have been able to see how different projects are beginning to converge with each other. Ideas that manifest themselves in completely different scales, forms, and materialities, but still share a sort of underground waterway that allows them to navigate through common waters. It's very exciting to see that this is happening and that it works, sometimes I think it's natural!

What is a typical working day for you? Strangely enough, I don't have typical days, they are always different. I see and do different things every day. I don't have the habit of entering the studio in the morning and leaving in the afternoon. I like to keep it that way, changing. One day you can be worried about a small drawing on paper and the other day be in a workshop calculating the weights of a structure that will be installed in the public space, or picking up my kids from school, even throwing the bone to our dog. I think those differences are what stimulate me and make each day have a different flavor.

In an Instagram age do art books still matter to artists? Art books, and books in general, remain, and will forever remain, the most important thing. Instagram is a tool, books are knowledge. I have always been captivated by the idea that a book can be left aside for a long time, kept on a shelf, but when that book is reopened, its contents emanate again. It returns to meaning and echoing in the time or culture from which it is read and studied. It is almost like magic.

To see more of Ossa's work, and that of the art world's most gifted next generation, order a copy of Prime: Art's Next Generation here. 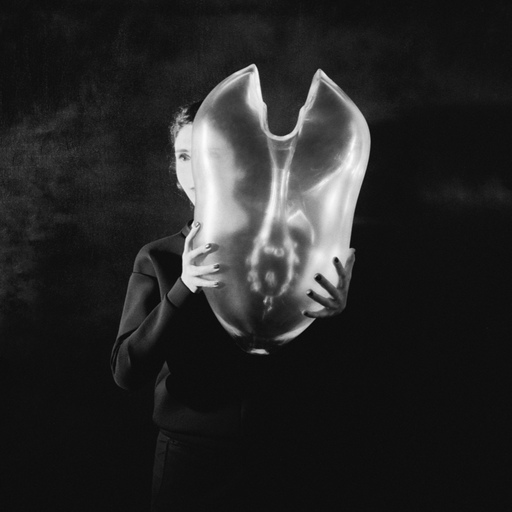 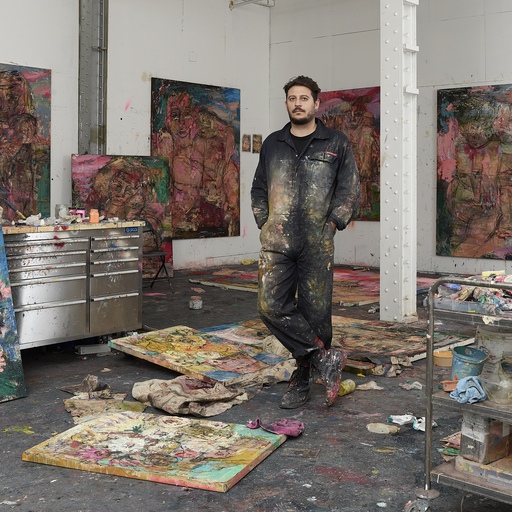 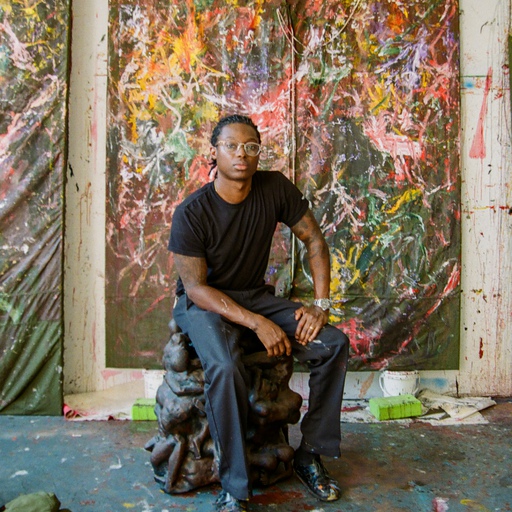 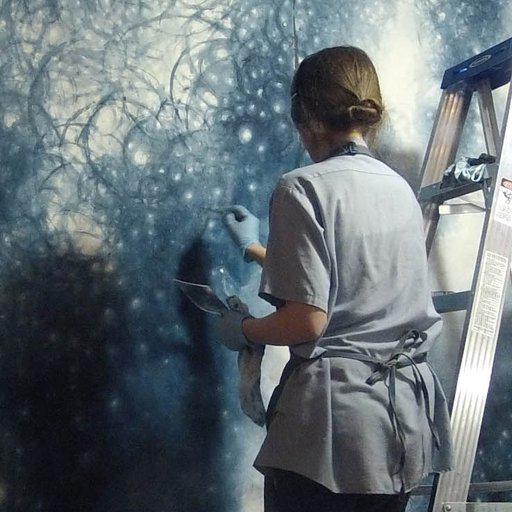