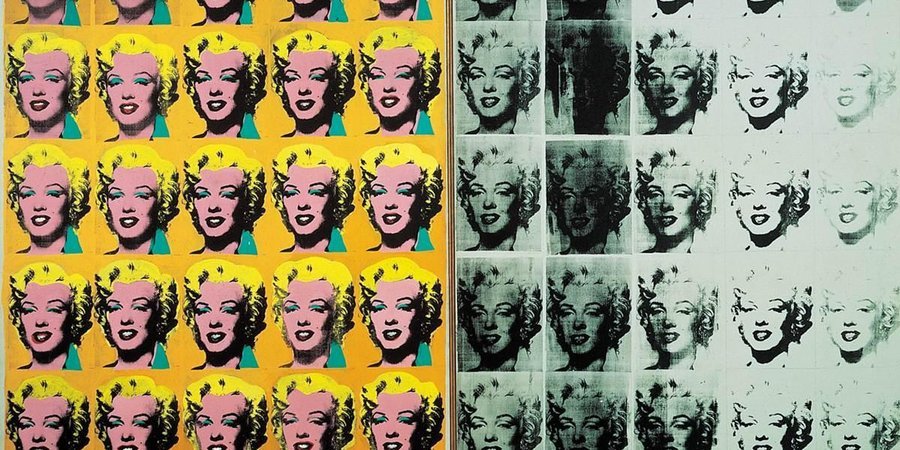 Andy Warhol's "A Shot of Marilyn"

In Some Like It Hot, Marilyn Monroe's character complains that she's always "getting the fuzzy end of the lollipop," and the iconic starlet herself similarly went through life with the stinging perception that Hollywood gave her the short shrift, never accepting her as a serious actress. The art world, however, has always taken her seriously—as a beauty, as a muse, and as a symbol.

From Richard Avedon to Andy Warhol to Cindy Sherman, artists have made the ‘50s actress an indelible part of American art history, with her image—and the way that her image has entered the visual culture—influencing Magnum photographers and street artists alike. So while the blonde bombshell may be more widely known for her sultry performances in movies like The Seven Year Itch, here are five reasons why her afterlife in the art world may be just as important as her movie-star presence.

After a revelatory performance in 1950 Best Picture winner All About Eve, Monroe was propelled into the world of Hollywood stardom. As with any major star, she had a group of photographers that followed her, snapping photos at any chance they could get. Unlike other stars, however, Monroe’s horde of shutterbug groupies included some famous names—and Magnum Photos, the legendary collaborative known for its reportage-style photography, fell in love with Monroe’s star persona. Bob Henriques, Philippe Halsman, and Elliott Erwitt’s photographs of Monroe were published in Life Magazine, which was then the most important outlet for professional photographers. Among the other lensmen to obsess over Monroe were Richard Avedon and Frank Worth. Today, Monroe is still believed to be the most photographed woman to have ever lived.

Despite Monroe’s breezy onscreen presence, the actress had a turbulent personal life, something that Magnum photographer Eve Arnold was determined to show in her work. Arnold’s photographs are intimate moments found during downtime on the set of The Misfits, Monroe’s final film and an ill-fated collaboration with her playwright husband Arthur Miller. Instead of her usual toothy, ecstatic presence, the actress seems contemplative, at times even confused. In these photographs, Monroe is less Marilyn than Norma Jean Mortenson—the trouble-beset girl whose tumultuous childhood she chose to forget when she became a star.

At the beginning of the ‘60s, Monroe was at the peak of her fame. She had just starred in Some Like It Hot, and only three years later, tabloid magazines were flooded with rumors that she had trysted with the president, John F. Kennedy. By then, photographers had begun to capitalize on the blazing potential of Monroe’s sexuality, particularly Bert Stern, who famously photographed Monroe in the nude for a 1962 fashion spread in Vogue. Just six weeks later, Monroe died of a drug overdose, and the public went into mourning. Stern’s photos, which were published in a book called The Last Sitting, are still prized today for the photographer's honest depictions of Monroe’s almost-desperate vivaciousness and overripe glamour.

Because Monroe died at a young age and was so beloved by America, her image was inevitably the target of the Pop artists. Andy Warhol’s silkscreen prints are among the most well-known images of Monroe to have ever been produced, but other Pop artists, including James Rosenquist and Richard Hamilton, also worked with Monroe’s image. Each Pop artist seemed determined to transform Monroe into an icon of tragically impermanent beauty—the believed America would soon forget the starlet, who had died so young. For Warhol, this meant repeatedly reproducing a photograph of Monroe using a silkscreen, a process that degraded the image each time it was duplicated. Warhol’s portraits, made in the aftermath of her death, test the lasting power of Marilyn’s visage while also questioning the way her the Hollywood culture of commodification and image-creation may have contributed to her fate.

MARILYN IN THE PICTURES GENERATION: 1968-PRESENT

As Pop art was phased out by Minimalism and Conceptual art, obsessive art-making about Monroe briefly went out of style. The major exception to this was Richard Pettibone, who appropriated Andy Warhol’s Marilyn as a conceptual critique of originality (building upon Warhol's conceptual critique of originality). It was only inevitable that as the ‘80s brought the rise of the Pictures Generation, depictions of Monroe returned to vogue—though, in the circuitous spirit of the times, these images often referred exclusively to Warhol's work and not Monroe herself. Today, however, artists continue to return to Monroe’s celebrity persona: Cindy Sherman transformed herself into Monroe in one of her most famous photographs, while street artists continue to appropriate and destroy images of Marilyn, most notably in the case of Zevs, who obscures her image as a way of blotting out her iconography. Even Stern himself returned to images of Monroe in 2008 when he photographed the actress Lindsay Lohan as Monroe in an update of The Last Sitting, proof that Monroe's vitality as an freighted image persists undiminished.