7 of History's Most Mouth-Watering Artist-Run Restaurants 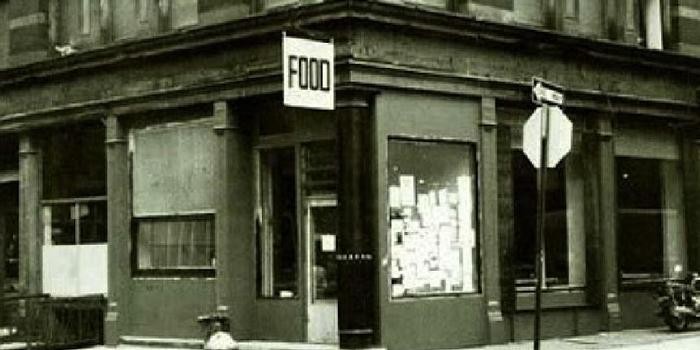 The original FOOD opened by Gordon Matta-Clark and Carol Goodden in 1971.

In recent years, food has staked out its place as a legitimate fine-art medium. Rirkrit Tiravanija, who has been known to cook curry at his openings, and Jennifer Rubell, who once roasted 150 rabbits as a tribute to Joseph Beuys, are among the artists best-known for exploring food not just as a material but as the heart around which so many of society's most significant rituals circulate. As a result, much food art falls within the realm of relational aesthetics and, in many cases, owes a debt to FOOD, the pioneering artist-run restaurant opened by Gordon Matta-Clark and Carol Goodden in 1971. The much-mythologized Soho haunt lasted just three years, but its spirit is about to be revived at the Frieze New York fair this weekend, when artists such as Matthew Day Jackson and Jonathan Horowitz will join Goodden and fellow FOOD founder Tina Girouard in the kitchen at the Randall's Island popup eatery.

In the spirit of FOOD, Artspace looks back on a few of our favorite artist-owned restaurants, edible installations, and other culinary inquiries in art history.

FOOD
Donald Judd, Robert Rauschenberg, and John Cage all prepared meals at Matta-Clark and Goodden’s Soho restaurant. Some dishes were more edible than others—Matta-Clark’s $4 “bone dinner,” a marrow-filled feast that ended with diners wearing the bones of their prey, was among the menu's more memorable experiments—but the concept restaurant was a pioneer in the Soho art boom of the 1970s.

PHARMACY
In 1998, Damien Hirst co-opened the restaurant Pharmacy in Notting Hill and decorated it with bar stools shaped like aspirin tablets and medicine cabinets stocked with hemorrhoid suppositories. It looked so much like the real thing that the Royal Pharmaceutical Society threatened to sue the owners, and Pharmacy changed its name to the anagram Army Chap before changing hands and ultimately shuttering in 2003.

THE DOUBLE CLUB
In 2008, the impish installation artist Carsten Höller transformed a London warehouse into a restaurant and nightclub that was split in half between Congolese cuisine, decor, and music and a vaguely euro-centric “Western” hot spot.

PARK AVENUE (WINTER, AUTUMN, SPRING, SUMMER)
In partnership with Creative Time, the restaurant—the name of which changes with the seasons—has commissioned artists such as Marina Abramovic, Michael Rakowitz, Paul Ramirez Jonas, and Janine Antoni to collaborate with chef Kevin Lasko on avant-guard edibles, which have ranged in the past from Volcano Flambé to venison served on Saddam Hussein’s china.

LA TAVERNA DEL SANTOPALATO
The Futurist ringleader F.T. Marinetti opened this anti-pasta restaurant in Turin in 1929 to serve dishes that broke with Italian tradition. The fare ranged from the unpleasant (deep-fried roses) to the dangerous (chicken stuffed with ball bearings) to the patently ridiculous (kumquats served with strips of velvet, sandpaper, and silk, plus a waiter who sprays carnation perfume while a Wagner opera plays in the background and a giant fan blows on the diner). The menu ultimately informed Marinetti’s famous Futurist Cookbook of 1936.

ZAGREUS PROJEKT
Chef and curator Ulrich Krauss allows invited artists to do pretty much whatever they want at his ongoing Berlin gallery and restaurant. Multimedia artist Philipp Geist paired seafood with projected scenes of the bodies of water from which it was sourced, while performance artist Karl Heinz Jeron has supplied patrons with headphones playing the diary of a mental patient.

7 of History's Most Mouth-Watering Artist-Run Restaurants