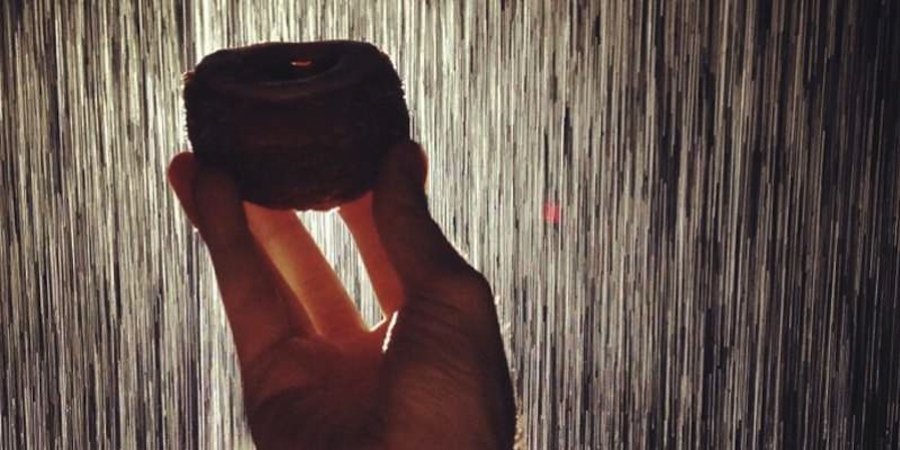 Is this a photo of the Artspace Special-Achievement Award? No, it's the cronut someone Instagrammed inside the "Rain Room"

Well, it's been quite a year. Ups and downs, lefts and rights, you name it. Galleries got bigger, art got more Internet-y, collectors put more skin in the game, and celebrities got artier. At Artspace, we closely monitored the art landscape throughout 2013 with an eye toward our prestigious first annual Artspace Awards, and today we are pleased to announce the winners across a panoply of categories. Drumroll please….

Best Christmas Miracle: The Annenberg Foundation's anonymous $530,000 purchase of 24 Native American artworks at a controversial Paris auction this month, which it then returned to the rightful owners in the Hopi Nation and Apache tribe

Most Conflicted Christmas Miracle That We'll Take Anyway: Vladimir Putin's sudden decision to release the two imprisoned members of the protest art collective Pussy Riot before Christmas—and, more importantly, before the Winter Olympics in Sochi—even though their sentences were almost up anyway and it was a transparently calculated political move

Funniest Hollywood Art Collab: The paintings in James Franco's art collection in the movie This Is the End, which the actor made with the artist Josh Smith over two days in his studio (and which, humorously, blare the name "James Franco")

Most Harrowing Evocation of the Ineluctability of Death in a Cold, Godless World:Rudolf Stingel's honestly bone-chilling dirge for his late friend Franz West at Venice's Palazzo Grassi

Biggest Big Show in a Year of BIG Shows:Paul McCarthy's "WS" at the Park Avenue Armory

Most Expensive Painting:Francis Bacon's There Studies of Lucien Freud, which sold for a world-auction-record $142.4 million at Christie's (in case you hadn't heard)

Best Blast From the Fairly Recent Past: Jeffrey Deitch's buzzy return to New York, following his tenure at Los Angeles's MOCA, with an immersive recreation of fabled 1980s art nightclub AREA at the Hole, the Bowery gallery run by Deitch Projects alumna Kathy Grayson that became a nonstop party destination for the show's brief run

Best Wish Come True: The Metropolitan Museum of Art increasing its hours, opening its formerly VIP-only Tuesdays to everyone and making it crystal-clear to all that its $20 admission fee is suggested, i.e. essentially waivable for art lovers on a budget

Best Art-Related Twitter War: Jerry Saltz's grudge match with conservative Twitter trolls over the New York magazine art critic's comments on the painting by George Zimmerman that recently sold for over $100,000 on Ebay

Best Reason for an Art Selfie: A tie between Random International's Rain Room at MoMA and Yayoi Kusama's infinity rooms in the "I Who Have Arrived in Heaven" show at David Zwirner (runner-up: James Turrell's Aten Reign at the Guggenheim—if you were lucky enough to sneak a pic past the vigilant guards)

Best Meme-Crossover Brain Explosion: When that guy Instagrammed a cronut in Rain Room

Least Expected Crossover:Ai Weiwei's "Divine Comedy," a heavy-metal protest album that he recorded with the Chinese musician Zuoxiao Zuzhou, which was led by the single titled Dumbass that blasted the government for its ongoing harassment of the artist (sample lyric: "Stand on the front lines like a dumbass, in a country that puts out like a hooker")

Most Convincing Reason for Why We Really Do Need More Cats in Art: "The Cat Show" at White Columns

Best Sonic Youth Reference in an Exhibition Title: "1993: Experimental Jet Set, Trash, and No Star" at the New Museum

Best Performa Commission That Added a Welcome Note of Risk, Improvisation, and Hell-Bent Unruliness to the Biennial:Marianne Vitale's crypto-Western burlesque The Missing Book of Spurs

Best "Durational Performance" by a Musician Who Isn't Jay-Z:Ragnar Kjartansson's A Lot of Sorrow at MoMA PS1, in which the artist had the National play their song "Sorrow" over and over for six hours straight

Best Venice Biennale Pavilion for a Country You Probably Couldn't Pick Out on a Map: Angola's "Luanda, Encyclopedic City," which won the Golden Lion for best national pavilion

Squirmiest Exhibition That Became Both More and Less Squirmy the More You Thought About It: The Met's "Balthus: Cats and Girls"

Weirdest Art Thing Involving a Celebrity: Tilda Swinton taking a nap in a glass box in MoMA's lobby for her ongoing performance piece called The Maybe

Best Gallery You Don’t Actually Have to Enter to Appreciate the Artwork: Allison Gingeras’s OKO Gallery in the East Village, currently hosting paintings by Ella Kruglyanskaya

Most Rigorously Objective Analysis of Art and Culture Today: "I’ve been connected to the most culturally important albums of the past four years, the most influential artists of the past ten years... I will be the leader of a company that ends up being worth billions of dollars, because I got the answers. I understand culture. I am the nucleus." — Kanye West

Best Use of In Situ Classical Statuary by a Contemporary Artist: Nicole Eisenman's Carnegie Prize-winning installation at this year’s Carnegie International for her show within a show interspersing her own paintings and plaster sculptures among marble figures in the museum's permanent collection

Best Evocation of the Art World as a Community, Not an Industry: Phong Bui's "Come Together: Surviving Sand" group show at the Daedalus Foundation

Most Dramatic Career Transformation: Steve McQueen's morphing from a semi-obscure experimental British artist best known for his 2009 British Pavilion at the Venice Biennale into the big-budget, A-list Hollywood behind "12 Years a Slave," a historical heart-render that may well prove Oscar-worthy